‘Fronteras' is a strawberry variety released by former UC plant breeders Doug Shaw and Kirk Larsen in 2014. It is a short day variety, meaning it responds to day length, produces the bulk of its fruit in the shorter days of spring and fall, and is adapted to the fall planting and winter production system of the California coast.

‘Fronteras' is a large and vigorous plant, more so than the short day variety ‘Ventana' in use for many years by growers. When planted in the early fall, the production pattern of ‘Fronteras' is similar to or slightly later than ‘Ventana'. On average, at the former Pomology Field Station in Watsonville, early yield of fruit (meaning up to May 1 in Watsonville and up to April 1 in Irvine) from ‘Fronteras' was approximately one quarter of the total yield, whereas for ‘Ventana' early yield is 2/5 of the total, although it is important to note that ‘Fronteras' is yielding 25% more than ‘Ventana', and in absolute numbers the early yield is comparable in volume. 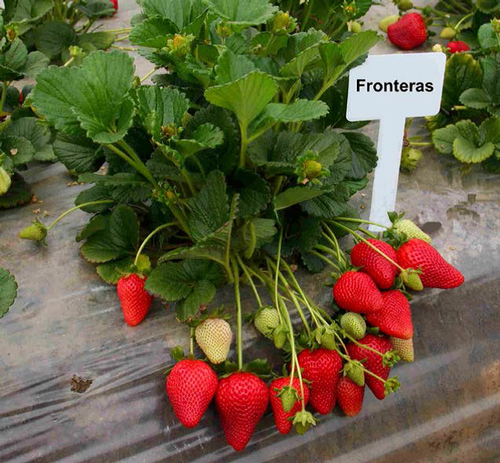 Strawberry variety 'Fronteras'. Photo courtesy Doug Shaw.
Comments: 1
Comments:
by Michelle Deleissegues
on May 15, 2020 at 1:46 PM
Hello.
I work for Red Blossom and we grow Fronteras. I'm looking for a photo or two of the variety and would like to request permission to repost your photo above on our website. Would that be permissable?
Thank you!
Michelle Deleissegues
Marketing Director, Red Blossom Sales
Leave a Reply: