‘Petaluma' is another variety released by former UC plant breeders Doug Shaw and Kirk Larsen in 2014. As with ‘Fronteras', it is a short day cultivar, meaning it produces the majority of its fruit in during the shorter days of spring and fall rather than in the summer. It is adapted to the fall planting/winter production systems of the coast of California.

Compared to the standard short day variety ‘Ventana', ‘Petaluma' is a moderately vigorous plant, and for this reason will likely occupy less space per plant in the field than ‘Ventana'. The fruit is a bit darker and larger than ‘Ventana', has great flavor and good storage characteristics.   The fruiting pattern of ‘Petaluma' is similar to that of ‘Ventana', with on average close to 2/5 of its production taking place in the early part of the season.

‘Petaluma' shows good resistance to Fusarium wilt. Resistance to Verticillium wilt and to Phytophthora is substantially greater than that of ‘Ventana'. Based on controlled inoculations, ‘Petaluma' has a good level of resistance to crown rot caused by Macrophomina. 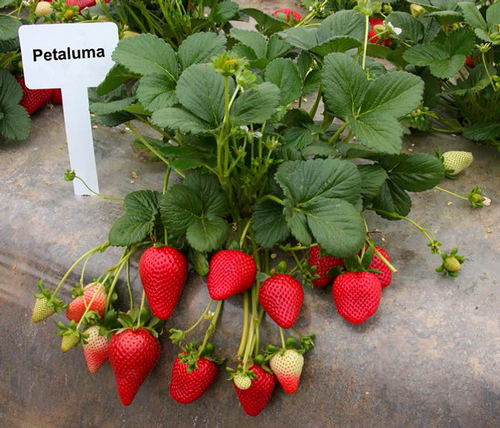 'Petaluma' variety strawberry. Photo courtesy Doug Shaw.
Tags: Petaluma strawberry (1)
Comments: 5
Comments:
by Heather
on May 2, 2018 at 11:11 PM
Hi Petaluma is new to our region in Victoria Australia. I'm planting them about 30cm apart diagonally. Is that ok? Any quirks like light trim in summer? Advice please?
by Mark Bolda
on May 3, 2018 at 6:48 AM
Hi Heather. 30 cm (about 12 inches) should be fine on the diagonal, it's not a huge plant so you could also look at narrowing that at a bit. No, I haven't heard of the need to cut the plant back mid-summer, remember it's a short day so won't be producing a whole lot of fruit then.
Mark
by Arturo
on January 26, 2019 at 5:10 AM
Does Petaluma create runners or can it only reproduce by seeds?
by Concepcion Eslao
on March 3, 2020 at 7:53 AM
hi there,I am connie from the Philippines and we are currently having a massive problem due to fusarium wilt hence I've learned that Petaluma strawberry is a resistant variety hence if you could help me to buy seeds for this variety....Thank you so much
by Mark Bolda
on March 3, 2020 at 9:23 AM
Hi Connie,
Thanks for checking in from the Philippines. I will share with you however that Petaluma is NOT resistant to Fusarium wilt. The go to tolerant variety here on the Central Coast of California is San Andreas, which survives Fusarium infestation but does lose yield in the absence of a soil treatment like fumigation.
This is discussed elsewhere in this blog, but contact me if you have more questions on this. It's a big deal and important to get right.
Mark
Leave a Reply: