At the Feb. 26, 2016 Grape Vine Red Blotch Webinar it was announced that the Threecornered Alfalfa Hopper (Spissistilus festinus Say), hereafter referred to as the TCAH, had been observed to transmit the Red Blotch Virus between potted grape vines in an indoor setting. This naturally has raised questions about whether or not such transmission will also occur in the field, and just how concerned we need to be about the TCAH on the Central Coast as the insect is commonly found in this area.

The UC IPM Website has information on the general biology of the TCAH and its management in alfalfa fields. The host range of the TCAH is fairly broad, including many plants that can be found nearby or within vineyards, including alfalfa, clovers, grasses, small grains, vetch and weeds. The TCAH has five nymphal stages; these stages do not have as distinct of a triangular shape as the adults. The characteristic girdling damage is often caused by feeding activity of the late instar nymphs or through oviposition activity of adult females1. Information on the population dynamics of the TCAH throughout the different areas of the Central Coast is not available at this time. In the San Joaquin Valley the populations generally peak in late September and October. Wistrom et al. (2010) tracked populations of the TCAH in alfalfa fields over 14 months in the southern San Joaquin Valley in 2006-2007; they observed peak populations somewhat later, in November and December. Using both sticky traps and beats-sweeps to collect TCAH, they found that the sticky traps collected relatively few TCAH compared to using the beats-sweeps. Mueller and Johnson (1989) working in soybeans also observed similar ability to detect population peaks with sweep nets but less so with sticky traps located at 3 m (10 ft.) height; they also observed that movement of the TCAH was mostly confined within the top 0.33 m (1 ft.) height above the ground surface. Girdling damage from the TCAH is not commonly seen in vineyards in San Luis Obispo or Santa Barbara counties in general, which suggests that TCAH populations within our vineyards are not very large. However there may be occasional important exceptions; for example in 2015 a local pest control adviser reported observing the characteristic petiole girdling caused by the TCAH on an appreciable number (approximately 5-15%) of vines in a vineyard block in the Santa Maria area, during the month of May. This suggests that there may be times and/or locations where the TCAH can be quite prevalent, and which may create more concerns for the potential spread of Red Blotch. However it is important to remember that other treehopper insects can also create similar types of girdling damage to plants; it should not be assumed that girdling damage by itself is proof of TCAH activity without further verification.

Viticulture Farm Advisor Rhonda Smith from Sonoma County makes a very important point with regards to our current understanding of the TCAH: "The biology of this insect is unknown outside of the low desert or the southern San Joaquin Valley, and understanding the biology of the vector will aid in understanding epidemiology and eventually vector management." Given our current lack of knowledge about the behavior of the TCAH in this region and the actual impacts on spreading Red Blotch in the field, at the current time it would be prudent for growers to be on the lookout for any signs of TCAH feeding damage on vines and to confirm the identity of insects that are suspected of causing this damage. Local growers who identify the TCAH or observe damage indicative of the TCAH in their vineyards in 2016 are requested to contact me. Information from growers about populations of TCAH will help increase our knowledge of the biology of this insect in the region, and help guide management practices, if necessary, in the future. Detailed picture of an adult, from side

Detailed picture of adults, from top

Detailed picture of a nymph Figure 4. The single red leaf on this vine is a symptom of petiole girdling by a hopper insect. 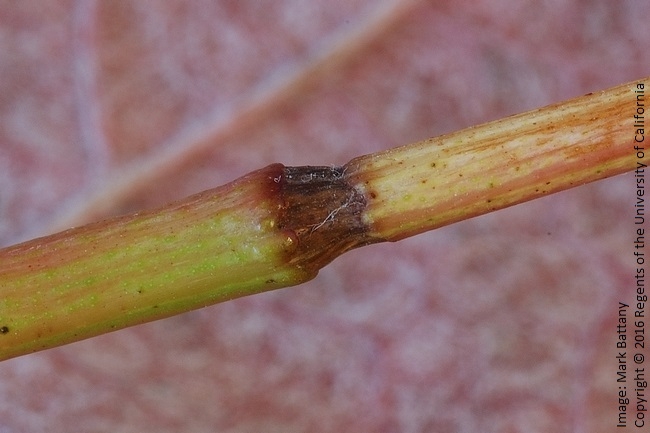