Bug Squad
sitenum=63
Happenings in the insect world
Rachael Long: A Boy, a Bat, a Coyote and a Crow Rachael Long and her book. (Photo courtesy of Woodland Daily Democrat)
It doesn't get more real.

Eugene was only two years old when his mother began weaving the stories about nine-year-old Jack: his deep friendship with the three animals, his love of wildlife, his exhilarating adventures, and the unexpected dangers that threatened him in his search for gold near his parents' cabin in the Black Rock Desert. The dangers? Among them, an international network of poachers and a hungry pack of wolves.

Eugene is 19 now and off to college this fall, but the stories she told him live on. They are chronicled in her newly completed Black Rock Desert Trilogy (three books): “Gold Fever,” “Valley of Fire” and now “River of No Return,” works published by Tate Publishing and Enterprises, Mustang, Okla.

Long will discuss “River of No Return” at a book-signing at 1 p.m., Saturday, Aug. 20 at the Avid Reader, located at 617 Second St., Davis. The event is free and open to the public. Live bats and/or specimens are expected to be part of the presentation.

Long dedicated the book to Eugene ("he heard the stories first") and her husband, David ("for always being there"). Last book in the Black Rock Desert Trilogy, "River of No Return." Rachael Long will be writing more books.
Eugene has always enjoyed the stories his mother told him, and now, he's enjoying the books his mother wrote for him and the outside world. "Few stories can engage kids in adventure and awareness of the natural world like these can," Eugene said. "Any kid with an adventurous mind and a curious disposition towards nature won't be able to put this book down. Enjoy. I know I always have.”

Long, who as a scientist and Yolo County farm advisor researches the benefits of bats in agriculture, thoroughly engages the readers (the book is aimed for the age group 8-12, but is also for adults) with information about the pallid bat, Pinta. Throughout the book, Long dispels many myths of bats that give them "a bad rap."

In real life, Long works with farmers to ensure that bats are protected. "We are studying the impact of bats on the key codling moth pest in walnut orchards," Long related. "Preliminary data from 2008 documented that 5% of a colony of 3,000 bats on a walnut farm in the Central Valley fed on this pest, showing an economic benefit, which we are in the process of quantifying. Other agricultural pests detected in the guano samples included Lygus bugs and armyworms. Outreaching information on the benefits of bats to agencies such as the USDA Natural Resource Conservation Service, will help protect bats on farms."

In her trilogy, a 10-year project, Long makes Pinta quite lovable, describing her as having a "cute little Chihuahua face" and making sure readers knows she's a pollinator (just like honey bees, bumble bees and butterflies) and that she consumes pest insects.

Pinta tells Jack she turns yellow when she eats what she calls "the yummy pollen and nectar" of cactus flowers. She also talks about other topics. Close-up of the face of a pallid bat that "looks like a Chihuahua." (Photo by Kathy Keatley Garvey)
An excerpt from the book:

"Jack knew all about bat migration and their use of stars, landscapes, and even the earth's magnetic field to find their way home. But he knew nothing about their lives. 'How many pups do bats have a year?' he asked.

Pinta replied: "Generally one, but sometimes we have twins."

When Jack asked Pinta how long the mother bat cares for them, Pinta replied: "Sometimes up to a year...They're so helpless when they're born, bald as an egg and can't fly. We wean them after about eight weeks when they start flying and catching their own insect prey."

Pinta also related that she can eat "almost" her full weight in insects every night. Jack is amazed. "Wow, that's like me eating ninety pounds of pizza every night!" he exclaims.

"The River of No Return" is a page-turner. It's interesting, exciting, and suspenseful. You eagerly want to know if the poachers who are capturing and caging wild animals will go through with their plans to sell them to international zoos. The leader, Sarge, is a mean-spirited military veteran who hopes to make a million from the illegal operation and buy the Last Chance Ranch near the cabin of Jack's parents.  Why? It has an undisclosed copper mine on the property. Sarge brags to his fellow poachers about how rich he will become.

Meanwhile, a starving wolf pack blames Jack for decimating the wildlife population and targets him. What happens next? You'll have to read it and see.

Bottom line: "The River of No Return" is about camaraderie, communication (Yes, Pinta, Sonny, Midas and Jack communicate with one another), survival, kindness, cruelty, greed and justice.

And bats, too. After reading the "Black Rock Desert Trilogy," you'll come away with a newfound appreciation for those insect-eating bats.

It doesn't get more real. 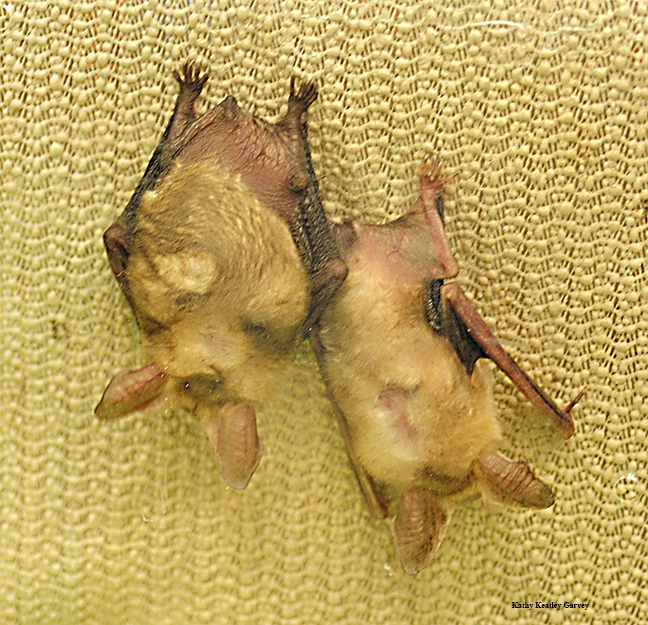 Pallid bats, shown here hanging upside down, were featured at Rachael Long's presentation on her second book, "Valley of Fire,"at the Avid Reader, Davis. She will speak on her latest and last book in the trilogy, "River of No Return," at 1 p.m., Saturday, Aug. 20 at the Avid Reader. (Photo by Kathy Keatley Garvey) 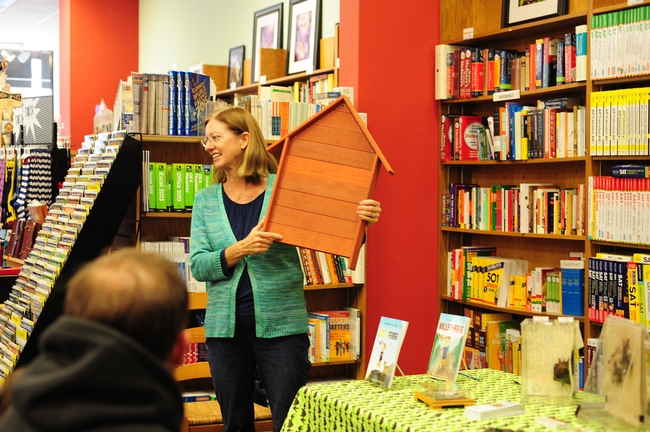 Rachael Long, in a presentation at the Avid Reader, shows a bat house. (Photo by Kathy Keatley Garvey)
Tags: Avid Reader (1), bats (7), Black Rock Desert Trilogy (1), Gold Fever (1), Rachael Long (9), River of No Return (1), Valley of Fire (1), Yolo County Farm Advisor (1)
Comments: 1
Comments:
by Chris Laning
on August 18, 2016 at 8:56 AM
Yay, BATS!!! I helped with bat research as an undergrad and was privileged to handle several species, including pallid bats. They are very cute little critters!
Leave a Reply: