I have to confess I'm an impulse buyer when it comes to plants.  Back in the spring I saw a dragon fruit plant (Hylocereus spp.) also known as a pitaya (pitahaya) in the nursery department of a big box home improvement store in Fairfield.  It was the first time I had seen the plant for sale locally.  The idea of growing my own dragon fruit was too tempting to pass up, so I had to buy it.

If you're unfamiliar with dragon fruit, there are a number of varieties with a variety of outer skin colors ranging from yellow and red, to various shades of pink, with pulp colors of white, pink or red.  But the most commonly sold dragon fruit in the Bay Area ethnic markets have a pink skin.  That outer skin is inedible.  The pulp is generally white with tiny black edible seeds.  Its taste is often described as a mix of kiwi, watermelon, and pear.  It's generally sweet.  But somewhat tart varieties also exist.

Not knowing anything about the plant I started to do some research on it.  It turns out there's a reason the plant is not commonly sold in this area.  It's hardy in USDA zones 10a – 11.  Since we are in USDA zone 9b, it will be interesting to see how well the plant grows here and if it will ever bear fruit.

Native to Mexico, Central America and South America, the subtropical plant is a vining cactus that can grow twenty feet or more tall.  It requires a trellis or other support system.  In its native habitats it often grows up along trees for support.  (If you're curious what a mature plant looks like, and some support systems, you can find photos in a PDF document located at http://ucanr.edu/sites/sdsmallfarms/files/172464.pdf.  Dragon fruit is currently grown commercially in Southern California.

The plant begins to flower in the spring.  The blossoms are very large and very fragrant.  But the blossoms only bloom at night for a single evening.  The blossoms do require pollination, which is mostly done by bees, but can be pollinated by hand as well.  Some varieties require cross pollination while others do not.

It should be planted in full sun for best fruiting.  It grows in most types of soil providing there is adequate drainage. It does best in soil with lots of organic matter.

My plant had no blossoms when I purchased it, so I don't know if it's too young to begin bearing fruit, or if it's a symptom of not growing in the right climate zone.  When I purchased the plant it had only two long vines, but as you can see it has since sprouted many new vines.

Since I have no idea where I want to plant such a potentially large cactus in my yard, and am uncertain if it will even survive the winter, like many of my impulse plant purchases, it will remain in a pot until next year.  This will also allow me to move it under shelter during any freeze warnings this winter. 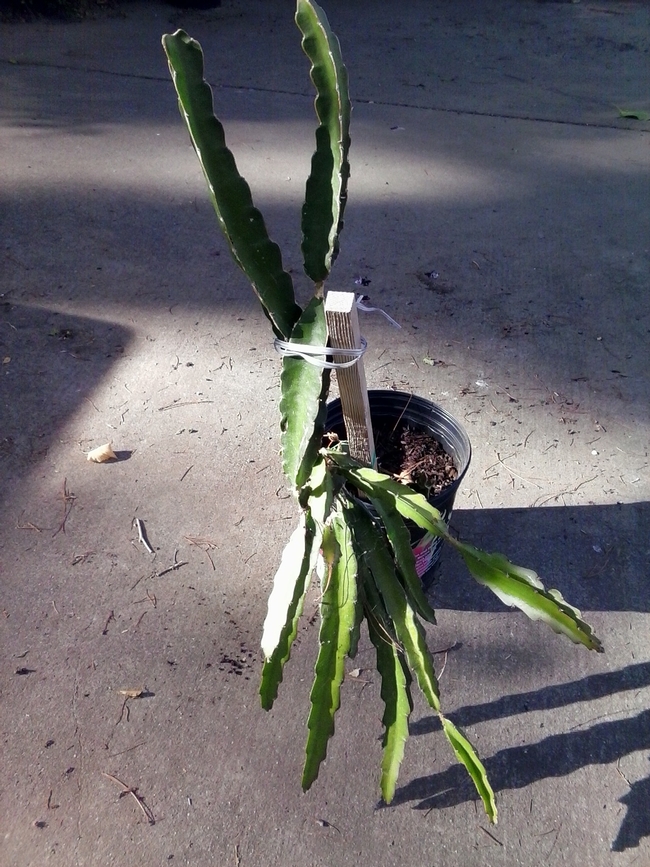 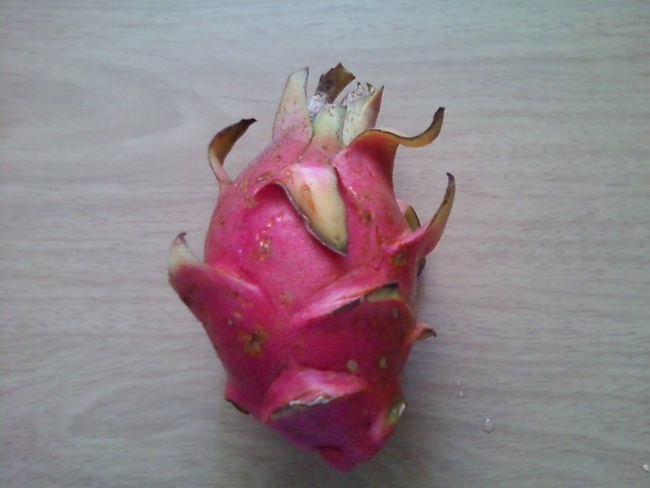 The fruit.
Comments: 4
Comments:
by Harry. yee
on September 22, 2016 at 7:28 AM
Thanks for the information.
I live in Fairfield and planted one dragon fruit plant few years ago. It grew and had flowers but no fruits. It survived the winter outside without any protection. Will try hand pollination.
I search internet for dragon fruit....for pollination, it needs night creatures...like moth and bat?
by B Gomez
on September 26, 2016 at 3:59 PM
Thanks for the info, my mom gave me that plant at least 15 years ago; I never knew what type of cactus it was. I had mentioned to my aunt (who has a green thumb) that it never had any flowers, she told me it will. Well, it never has and now I know the reason why. It definitely is a climber, I've given many cuttings away because I don't let it get too wild. It has been outside the whole time I've had it, bees are in my area but I've never seen them pay any attention to this plant. Thanks again for solving that mystery for me.
by Michael Engel
on May 18, 2018 at 1:39 PM
Thanks for your insightful ““confession”
“ (my name. Is Mike and I’m an impulse plant buyer.”

Thanks to you, this team me I’m taking it out of my cart mat Home Depot and leaving it to grow in someone rlae’s Yard

;-)
by Jonathan Gordon
on June 28, 2020 at 6:14 PM
My wife and I live in Tracy and have been growing a few hylocereus undatus. We have managed to get them to grow fruit the last two years. I planted them in large pots, approximately fifteen gallons in size. We used a mixture of commercial cactus soil, raised vegetable bed soil and somewhat clay-like native soil mixed. I add homemade compost and a small amount of fertilizer. Normally you wouldn't do this for cacti, but we want the fruit to be sweet. I added some crushed pumice as well. Winters can get really wet and cause the roots to rot, or they can be very cold and kill the plants. I think the potting is the best way to go, so you can move the plants to a sheltered area during excessive cold spells and heavy rain.
Leave a Reply: