Some linger quite awhile before they buzz off.

Have you ever thought about this: Do they have taste buds?

A colleague asked that question. In fact, it was his friend's nine-year-old son who asked: "Do bees have taste buds, and if so where?"

"No," says Extension apiculturist emeritus Eric Mussen of the UC Davis Department of Entomology and Nematology, who retired in 2014 after 38 years of service.

"Honey bees, and other insects do not have taste buds, as such," Mussen said.  "They have specialized, enlarged hairs; chaetic and basiconic sensillae; that protrude from the cuticle (exoskeleton).  The sensillae have gustatory receptor cells in them that sense the chemicals that are contacted by the tips of the antennae, the mouthparts, or the tarsi (feet) of the front legs.  The interpretation of the chemicals takes place in the subesophageal ganglion of the bee, not in the brain.  The esophageal ganglion is a very large nerve cell cluster attached beneath the brain."

It's good to see youngsters so interested in insects! 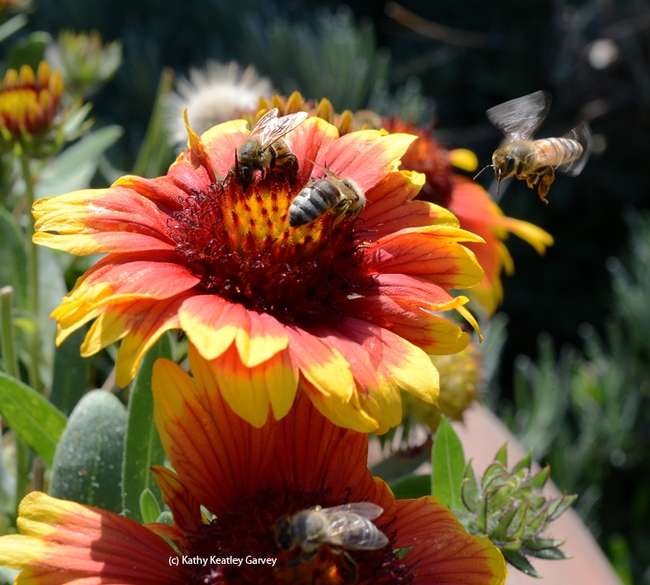 Honey bees sipping nectar from a blanketflower (Gaillardia), while another bee buzzes in. (Photo by Kathy Keatley Garvey)
Tags: blanket flower (11), Eric Mussen (250), Gailllardia (1), honey bees (395), taste buds (1)
Comments: 1
Comments:
by Kavi raj
on October 3, 2018 at 7:28 PM
Thanks for sharing such useful information with us. Hope everyone is get benefited.
Leave a Reply: