From the California Department of Pesticide Regulation (DPR) Halloween is upon us, and what better time to resurrect some chilling stories from this year that highlight consumers misusing pesticides with disastrous results!

These cautionary tales are merely a sample of the preventable deaths, unnecessary sicknesses, hospitalizations, and serious injuries reported to the California Department of Pesticide Regulation (DPR) this year.

Unfortunately, these stories are real – not fiction – and they highlight the importance of heeding warning signs, properly storing pesticides, and following pesticide label instructions and other laws.

Since some of these real-life case are still under investigation by local agricultural commissioners' offices, DPR will not identify the people involved or discuss potential violations/fines. … We have injected some humor in these stories, but they should still hopefully put a chill on consumers who otherwise might mishandle pesticides.

A Reedley-area boy was hospitalized in mid-May after drinking an herbicide stored in a beverage container.  The boy's grandfather had discovered a grocery bag sitting in the yard with a bottle of what appeared to be a sports drink inside. The boy's grandmother put the bottle in the refrigerator to cool it off, she told an investigator.  While she was not looking, the boy took it from the refrigerator, had a sip and began to scream.

The boy's father said the bottle contained glyphosate. He took the boy to a hospital emergency room where he was hospitalized for 4 hours, vomiting.  The father reportedly told investigators he'd gotten the pesticide from a friend who had a one-gallon container, likely purchased at a retail store.  The case remains under investigation by Fresno County Agricultural Commissioner.

Injuries arising from people consuming pesticides stored in improper containers are sad but all too common.  Takeaway: Sharing is great but do it safely. It's dangerous to store pesticides in food or drink containers. It is also against the law.

A 38-year-old man who works at a Merced County dairy was seriously sickened in August when he accidentally drank formaldehyde stored in a soda bottle at his work station.  The man immediately recognized his error, became very anxious, had difficulty breathing and went home. There, he said, he vomited and suffered extreme pain in his legs.

He was seen the next day at a local hospital but refused to stay for overnight observation. However, the next day he was admitted “due to his complaint of feeling like he's burning internally.”  The man was later discharged.  It's unclear how the chemical got in the bottle. However, formaldehyde is commonly used at dairies as a disinfectant.

The Merced County Agricultural Commissioner's Office continues to investigate the case.  Moral of the story? Not all drinks are created equally. Again, don't store pesticides in food or drink containers.

In one case, in August, a man died several hours after entering a tented building for what was an apparent burglary attempt.  An incident report says the man, 25, was exposed to the chemicals being used to fumigate.  He was inside for 3 hours before neighbors heard him calling for help and dialed 911, according to a police report.  After emergency responders retrieved him, he was taken to a local hospital suffering symptoms including breathing difficulty, skin rash and drooling. Unfortunately, he later died.

Moral of the story? Unless there's an “Open House” sign - Heed the posted warning signs and stay out of fumigation areas.

In late July, a 12-year-old boy attending an arts camp in Riverside County was sickened after he repeatedly applied 98 percent DEET to his body, face and mouth area.  The boy's father told the county agricultural commissioner's office investigators that his son had gotten the DEET at a camp store after a repellent his mother had given him didn't provide him relief from mosquitoes.

Responding to screams from children in the sleeping area, counselors found the boy that night lying unconscious in a doorway. His symptoms included hallucinations and excessive pupil dilation, in addition to drowsiness.

He was taken by ambulance to a hospital for treatment and was ultimately hospitalized for 2 ½ days, as he was being treated with medications to control seizures.  The Riverside CAC has contacted the camp about possibly restricting or monitoring pesticide sales to minors.  The case remains under investigation.

Moral of the story?  More is not always better. Read the label.

A woman in September reportedly sprayed her 5-year-old grandchild with an unidentified “bedbug spray.”  Later that day, the child experienced possible seizures, according to a preliminary poison control report.  The child was admitted to the intensive-care unit at a local hospital. The child was discharged about 36 hours after the exposure.  The Alameda County Agricultural Commissioner's Office continues to investigate.

Moral of the story?  Make sure Grandma reads the (pesticide) label.

In October, a 35-year-old woman in Los Angeles County was hospitalized after she mixed bleach with another cleaner while in the process of cleaning her house.  According to a preliminary incident report, she suffered chlorine gas inhalation. Chlorine gas can result from mixing bleach with cleaning products like ammonia.  Her breathing labored, the woman was taken to taken to local hospitals and was released.  The Los Angeles County Agricultural Commissioner's office is investigating this episode.

Moral of the story?  Having a clean house shouldn't kill you.

Moral of the Story

It's critical to follow label instructions (That includes not mixing pesticides or cleaners with other chemicals unless directed). It's also extremely important to heed warning signs, and to not store pesticides in food or beverage containers. 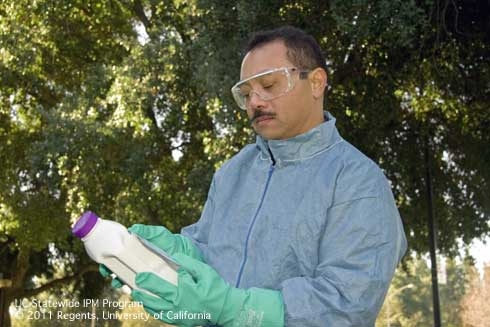