The news is not good.

The honey bee crisis is worsening.

Back in November of 2006, commercial beekeeper David Hackenberg of Pennsylvania sounded the alarm. Fifty 50 percent of his bees had collapsed in Florida. Other beekeepers came forward with equally bad news: some individuals reporting losing one-third to 100 percent of their bees.

Quickly referred to as colony collapse disorder (CCD), the mysterious phenomenon is characterized by adult bees abandoning the hive, flying off and leaving behind the queen bee, brood and stored food.

Fast forward to today: a federal survey shows a heavy bee dieoff this winter, and research published last Friday in the journal PLOS (Public Library of Science) shows an alarming number of pesticides found in pollen and wax samples from 23 states and a Canadian province.

Extension apiculturist Eric Mussen, member of the UC Davis Department of Entomology faculty, agrees that bees are in trouble and the declining population is worsening. Scores of beekeepers have reported opening hives and finding them virtually empty.

Meanwhile, another federal survey on bee winter losses will take place April 1 through April 14. That should shed more light on a darkening crisis.

Perhaps CCD is due to a yet undiscovered virus. Perhaps it's due to a combination of factors: pesticides, diseases, pests, viruses, malnutrition and stress.

"Unexpected, periodic losses of honey bee colonies, very similar to this, have been noted in the bee journals since the late 1800s, but they tended to be very short term," Mussen says in his March 19th Bee Brief, published on the UC Davis Entomology Web site. "In 1965, 66, and 67 a similar problem persisted for three years. Our current session is the longest yet."

"The intensity of research on possible leads to the causes of CCD is increasing around the world, as other countries are having similar losses in their honey bee colonies," he writes in his Bee Brief. "The global nature of the problem suggests that some other, more fundamental aspect of the environment may be involved.  Honey bees prosper best and are best able to resist diseases, parasites, exposures to toxins, etc. when they have fed on a quality diet.

"For bees in general, and honey bees in particular, that means a constant supply of pollens that provide their required proteins, vitamins, lipids, sterols, minerals, antioxidants and carbohydrates.  While global warming may not directly challenge a species of insect that can prosper from very cold climates to the equator, climate change may result in more stress on the bees.  Increased periods of dry, hot weather or cold, rainy weather, could limit availability and access to those important pollens.  The bees will have to rear their brood at the expense of their body nutrient reserves.  The brood will be less well fed, and in turn will not be good at rearing the next 'round of brood.' "

That sort of downward spiral, Mussen says, will leave the bees very fragile and susceptible. 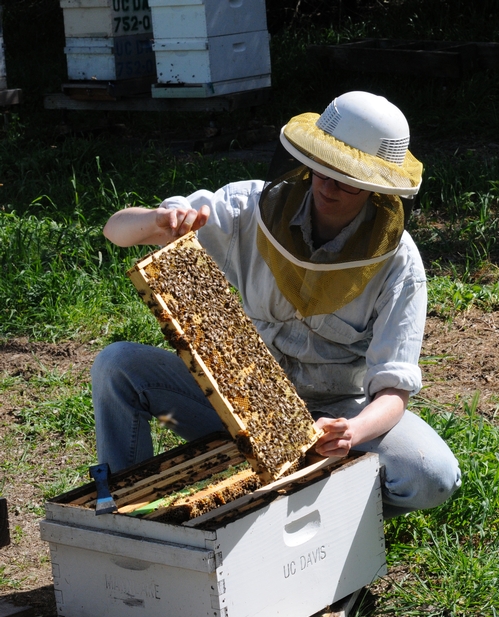 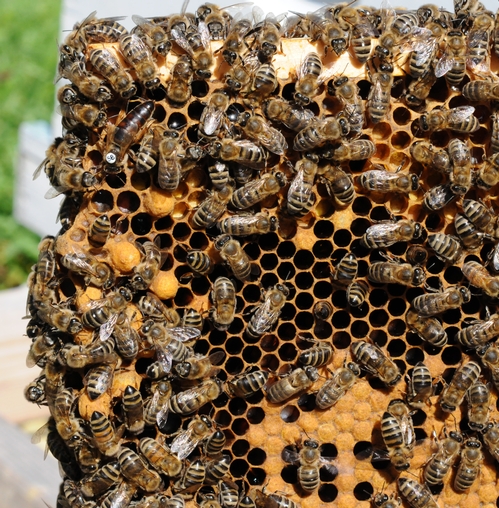 Close-Up
CLOSE-UP of a frame shows the queen bee (upper left) and her colony. (Photo by Kathy Keatley Garvey)
Tags: colony collapse disorder (14), Elizabeth Frost (18), Eric Mussen (250), honey bees (390)
Comments: 1
Comments:
by Revealing
on February 24, 2014 at 10:04 AM
Apparently, a monk who had been a bee keeper at an abbey for 40 years claims he had been collecting 100 gallons of honey a week until cell phone towers were constructed on the back of the property. Within weeks all of his bees died until he discovered a small area near the base of a hill where he could not get service. Once he moved his hives to that that particular area, the bees once again began to thrive and reproduce.

Is it possible that Honey Bee Colony Collapse Disorder is created by the micro-wave frequency omitted by cell-phone towers? Apparently, when a cell-phone is placed within a hive, the queen either dies or moves. Research also demonstrates that bees do not come within a mile or so of cell-phone/WIFI towers.

If this is the case will people be willing to give up their cell-phones, and will cell-phone providers, making billions each year from their service be willing to prevent the devastation of our food chain? Apparently, there is more to the cell-phone micro-wave frequency than most are willing to realize; http://www.focusonrecovery.net
Leave a Reply: