Matan Shelomi, who holds a doctorate in entomology from UC Davis, shares a laugh with major professor Lynn Kimsey. (Photo by Kathy Keatley Garvey)
Think about this:

So began UC Davis alumnus Matan Shelomi when he returned to the UC Davis campus Wednesday, Nov. 15 to present a seminar on his stick insect research: "Revelations from Phasmatodea Digestive Track Transcriptomics."

Matan Shelomi, a Harvard graduate from New York City, earned his doctorate in entomology in 2014 from UC Davis, studying with major professor Lynn Kimsey, director of the Bohart Museum of Entomology. He then received a National Science Foundation-funded postdoctoral position at the Max Planck Institute for Chemical Ecology in Jena, Germany. Today he's an assistant professor of entomology in the Department of Entomology at National Taiwan University in Taipei, Taiwan.

Shelomi focused his seminar on the digestive physiology of the stick and leaf insects, Phasmatodea, research that has taken him to three continents.

Kimsey introduced him as a terrific scientist and writer. Shelomi, with his quick wit and wry sense of humor, captivated his audience immediately.

One of his introductory slides read: The Unknown Unknowns

But back to his seminar: He defined a transcriptome as "sequencing of RNA expressed in given tissue at specific time and condition" and explained "RNA-sequence make cDNA from mRNA sequence."

He talked about stick insects producing cellulase and pectinase and about the research he's published, and new research that he hasn't. Yet. It's pending.

Each answer to a question led to more questions.

Shelomi said there's still many, many more questions to be answered on stick insects. "I'll leave that to others," he said, adding that he's now turned to studying the microbiome of dengue-vectoring mosquito breeding sites.

"That in biology one cannot assume," Shelomi said. "Some things we thought were universal only seemed that way because we hadn't checked for alternatives, and then stopped looking. But biology is not math: there are few if any axioms. Every species is unique, and every rule has an exception. Sometimes the former rules are the exception, like animal cellulases: once thought nonexistant, we now see that they are the ancestral state, and species lacking them are the exception. Organs, proteins, species may have radically different functions from their most similar relative. There is obviously still a place for educated guesses, but until you check you never know for sure... and the search may reveal things you never even thought to look for."

The applause that followed his talk was loud and long. 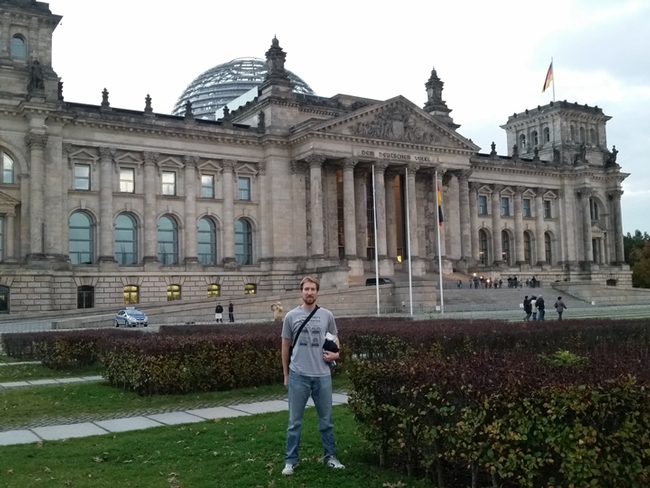 World traveler and scientist Matan Shelomi, wearing a Bohart Museum of Entomology shirt at at the Reichstag in Berlin. 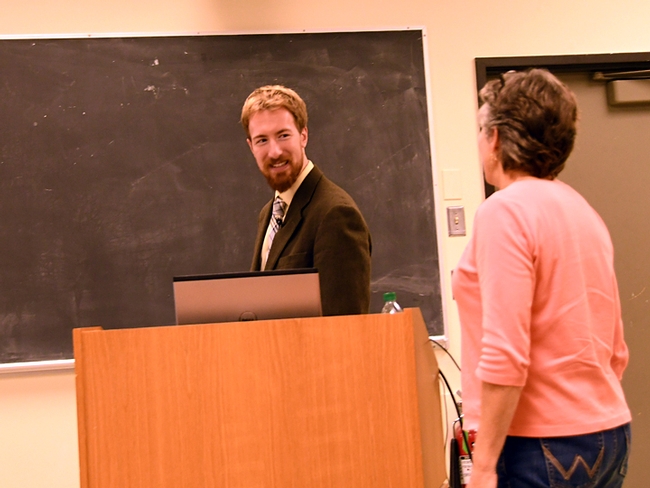