This is the beginning of a hornet's nest. At left is the queen bald-faced hornet, and at right a worker hornet. This is a display from the Bohart Museum of Entomology. (Photo by Kathy Keatley Garvey)
Most people avoid a hornet's nest.

"I began using hornet nest paper back in Ann Arbor, Mich. in the early 1990s," said Savageau, who describes herself as "an environmental artist who creates mixed-media  sculpture and installations."

"Hornet's nests are common in that area," she said. "I am attracted to the beautiful colors and patterns."

Her art will be among works displayed at the UC Davis Design Museum's exhibition, It's Bugged: Insects' Role in Design, set  Jan. 8-April 22 in Room 124 of Cruess Hall. The show is open to the public from noon to 4 p.m. weekdays and from 2 to 4 p.m. on Sundays. Admission is free.

The professor emerita, a member of the UC Davis faculty from 2003 to 2014 and now a full-time artist, says her work deals with the natural world, human culture, and their intersection.  "My current interests include  global warming and environmental destruction; consumer culture and  wasteful consumption; and artistic transformations of waste." Her Stanford anthropological training, her interest in the natural world,  and the many places she has lived are reflected in her art, which she has displayed in more than  80 exhibitions, both nationally and  internationally.

For the UC Davis exhibition, Savageau created a trilogy of wall pieces made from hornets' nest paper, and a set of sculptures made of wood etched into striking patterns by bark beetle larvae.

Savageau said she collected only unoccupied hornet nests in the Ann Arbor area, which she found on tree branches or lower in bushes. She has never been stung. "I collected the nests in late fall or winter, after some hard frosts, when the nests were empty (no life inside)," she said. "The queen leaves the nest and hibernates, under a log or some other protected place."

The nests she's collected range in size from a basketball to 30 inches in diameter.

The artistic process? "The paper on the nest is many layers deep," Savageau related. "I peel the paper off the nest—it comes off in irregular sizes and shapes.  Then I collage it onto foam core, matching the irregular pieces in such a way that they appear to be  one large sheet.  The pieces are usually no larger than four to six inches.  It's similar to piecing together a jigsaw puzzle."

The artist, who holds a bachelor's degree from Stanford University and her master's degree in fine arts from Wayne State University, Detroit, taught at the University of Michigan Residential College, Ann Arbor, from 1978-2002 before joining the UC Davis faculty in 2003.   (See more of her work at http://annsavageau.com/)

"The colors and patterns of a hornet's nest are indeed exquisite," said Lynn Kimsey, director of the Bohart Museum of Entomology and professor of entomology at UC Davis. "We have several hornet nests as part of our museum's collection, and one is huge--larger than a basketball." The  bald-faced hornet, Dolichoves pulamaculata, crafts the papery, egg-shaped nests by mixing wood fibers with saliva. The insect's name refers to the ivory-white markings on its face. Its thorax, legs and abdomen also have white markings.

The hornet nest closes down in late fall or winter, Kimsey said, and the queen leaves to hibernate for the winter in such protected places as in hollow trees and fence posts, or under logs, bark or rock piles. In the spring, the queen emerges to begin building a nest, which eventually may contain some 400 to 700 workers. The nests are mottled gray with layered hexagonal combs.

The bald-faced hornets are considered important to the ecosystem in that they pollinate plants and prey upon many insect pests. They are, however, known for their highly defensive behavior in protecting their nests.

A reception heralding the opening of the Design Museum exhibition is set from 6 to 8 p.m., Thursday, Jan. 11. Savageau will give a presentation on the exhibition at 6:30 p.m. in Room 256 of Cruess Hall. 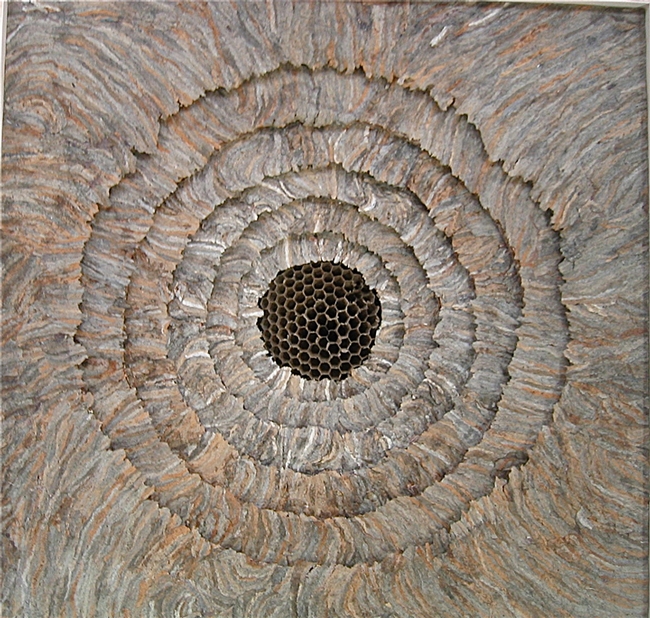 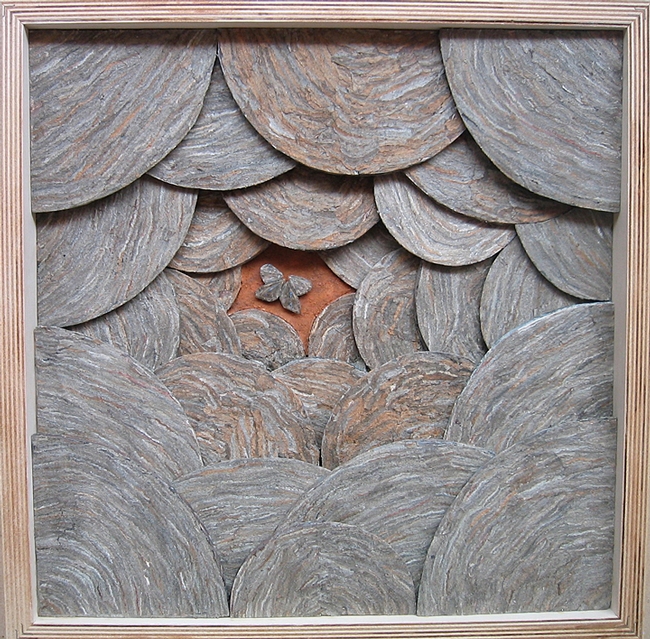 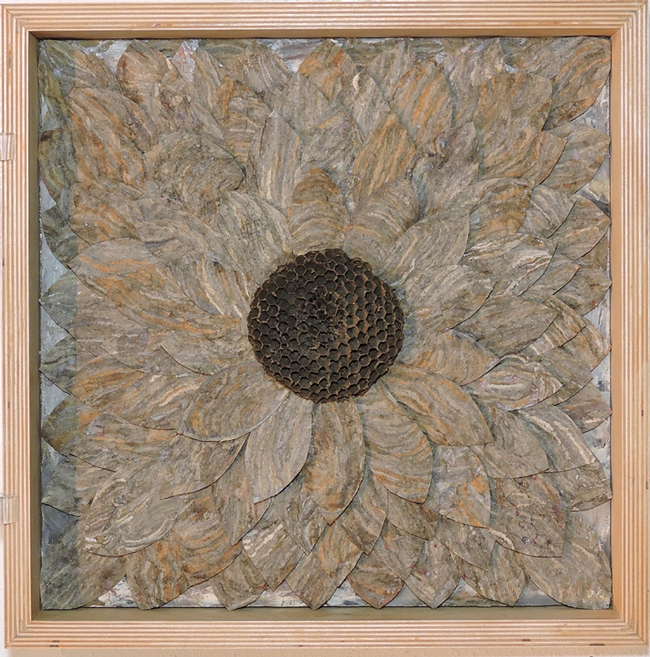 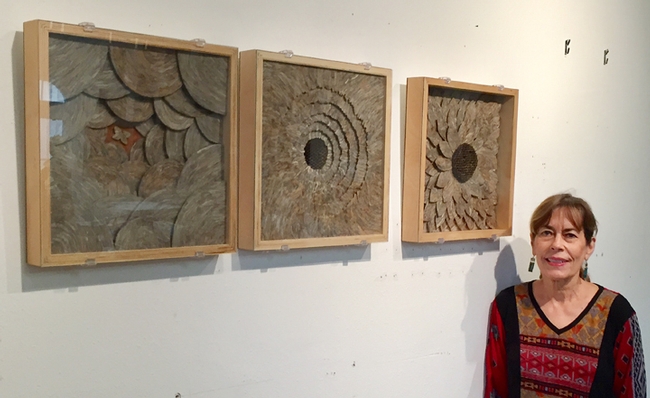 Artist Ann Savageau stands next to her triology of wall pieces made from hornet nest paper. The UC Davis Design Museum show begins Jan. 8 and continues through April 22. 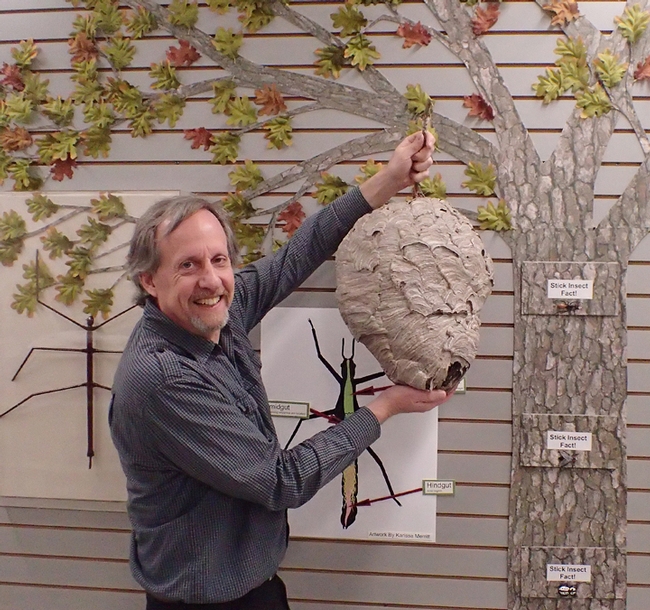