Travelers know Iquitos as the "capital of the Peruvian Amazon" but scientists know it as a hot spot for dengue, a mosquito-borne viral disease with raging outbreaks in many tropical and subtropical countries.

Amy Morrison, stationed in Iquitos full-time, has directed dengue research activities there for the past 15 years.  An epidemiologist who joined the UC Davis laboratory of medical entomologist Thomas Scott (now professor emeritus) in 1996, she's a project scientist and scientific director of the Naval Medical Research Unit No. 6 (NAMRU-6) Iquitos Laboratory.

Morrison is back in the states to present a UC Davis seminar on "Targeting Aedes Aegypti Adults for Dengue Control: Infection Experiments and Vector Control in Iquitos" from 4:10 to 5 p.m., Wednesday,  Jan. 10, in 122 Briggs Hall, Kleiber Hall Drive.

Hosted by the UC Davis Department of Entomology and Nematology, it's the first in a series of winter seminars coordinated by assistant professor Rachel Vannette and Ph.D student Brendon Boudinot of the Phil Ward lab.

Dengue is a threat to global health, says Morrison, who holds a doctorate in epidemiology from Yale University and a master's degree in public health from UCLA.  According to the World Health Organization (WHO), the incidence of dengue has increased 30-fold over the last 50 years and almost half of the world population is now at risk. It's ranked as "the most critical mosquito-borne viral disease in the world." This is the day-biting mosquito, Aedes aegypti, which transmits dengue. (Photo by James Gathany, United States Department of Health and Human Services)
The highly infectious tropical and subtropical disease is primarily transmitted by the bite of an infected female Aedes aegypti mosquito, a day-biting, limited flight-range mosquito that prefers human blood to develop its eggs. Dengue is caused by four distinct, but closely related, viruses. The most severe form of disease is life-threatening dengue hemorrhagic fever. There is no safe, effective vaccine or drugs, scientists say.

"Each year, an estimated 390 million dengue infections occur around the world," according to the World Mosquito Program. "Of these, 500,000 cases develop into dengue hemorrhagic fever, a more severe form of the disease, which results in up to 25,000 deaths annually worldwide."

Of the dengue project in Iquitos, Morrison says: "Comprehensive, longitudinal field studies that monitor both disease and vector populations for dengue viruses have been carried out since 1999 in Iquitos. In addition, to five large scale-vector control intervention trials, ongoing data collection has allowed the evaluation of Ministry of Health emergency vector control using indoor ULV space sprays with pyrethroids in concert with larviciding through multiple campaigns, as well as characterize local DENV (dengue virus) transmission dynamics through two and one novel DENV serotype and strain invasions into the city."

"Our research group has also been conducting contact cluster investigations on DENV-infected and febrile control individuals since 2008," Morrison relates. "These studies demonstrated that attack rates were consistent between houses where cases were first detected and recently visited contact houses independent of distance between these locations. Furthermore, contact cluster investigations allow us to identify viremic individuals across the spectrum of disease outcomes including inapparent infections."

"Using DENV positive individuals captured through these and other febrile surveillance protocols, we exposed laboratory reared (F2) Aedes aegypti mosquitoes directly on their arms or legs, and obtained blood samples with and without EDTA for exposure of mosquitoes in an artificial membrane feeder. After a 58-participant pilot study comparing feeding methods, we initiated a direct feeding protocol exposing participants (78 feeds in 31 participants to date). Feeding, survival, midgut infection and systemic dissemination are all higher using direct feeding than indirect feeding methods. Of 22 participants without detectable fluorescent focus assay titers in their serum at the time they were exposed to mosquitoes, 14 infected mosquitoes by at least one method."

"Although virus titer was a predictor of mosquito infection, mosquitoes became infected at low or undetectable titers and with subjects experiencing mild disease. We have evaluated insecticide-treated curtains and a novel lethal ovitrap (Attractive Lethal OviTrap = ALOT) for dengue control. Only the ALOT traps showed a significant impact on dengue incidence corresponding to a modest decrease in vector densities and a shift of the mosquito population age structure in the trap area to younger mosquitoes. Recent evaluations of indoor ULV interventions with pyrethroids suggest that ULV campaigns that reduce Aedes aegypti for at least 3 weeks through multiple fumigation cycles can mitigate DENV transmission during the same season."

Bottom line: "We argue that Aedes aegypti control should focus on interrupting transmission rather than long-term suppression at operationally unachievable levels and that emergency control should be applied at area-wide scales rather than reacting to individual DENV cases." 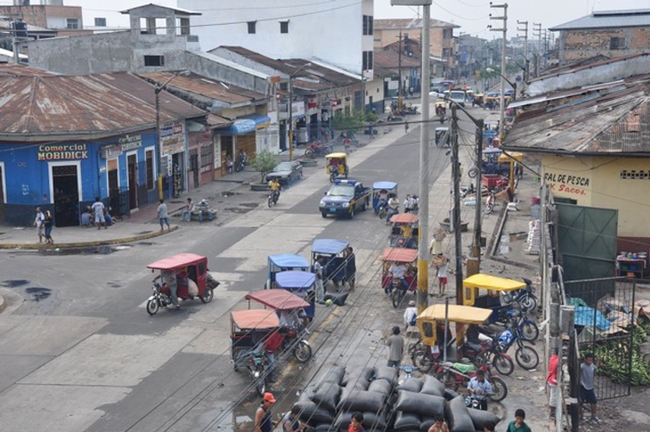 This is Iquitos, Peru, known as the "capital of the Peruvian Amazon." Scientists know it as a hot spot for dengue. (Photo courtesy of the Thomas Scott lab) 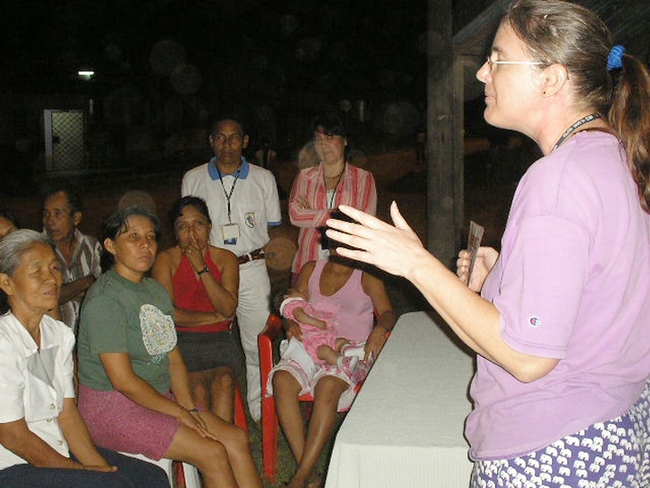 UC Davis epidemiologist Amy Morrison discusses dengue with Iquitos residents.
Focus Areas:
Focus Area Tags: Environment, Health, Innovation, Pest Management
Tags: Aedes aegypti (30), Amy Morrison (2), dengue (12), Iquitos (3), mosquitoes (26), Thomas Scott (15), UC Davis Department of Entomology and Nematology (599)
Comments: 4
Comments:
by drjjarvis
on January 10, 2018 at 7:52 AM
Could you please provide a link to the Entomology Dept Winter Seminar Series schedule? Thank you!
by Kathy Keatley Garvey
on January 18, 2018 at 9:36 AM
Thanks. We have it on this page: http://ucanr.edu/blogs/blogcore/postdetail.cfm?postnum=26072
by Ronald T. Richards
on June 13, 2018 at 12:42 PM
Amy,

Along time ago you helped build a roof over my carport in Trujillo Alto, Puerto Rico. I just wanted you to know that the roof survived Hurricane Maria with minimal damage. Thank you for your carpentry skills.

Ronald Richards
by us visa online
on January 4, 2022 at 10:55 AM
Thanks for your informative post.
Leave a Reply:

What You Can Learn About Figs at the Bohart Museum's Open House on Wasps
September 23, 2022