Bug Squad
sitenum=63
Happenings in the insect world
Bohart Museum: This Bug's for You Insect enthusiasts Addie Angle, 13, and her brother, Dalton, 6, who are enrolled in entomology projects in the Misty Mountain 4-H Club, Nevada City, work on their dragonfly art. (Photo by Kathy Keatley Garvey)
A praying mantis here. A lady beetle there. A sawtoothed-grain beetle there.

Entomologist-artist Karissa Merritt kept busy at the UC Davis Bohart Museum of Entomology's open house on “Insects and Art” last Sunday, Jan. 21 as she demonstrated how to draw insects.

“I took requests from kids that came by and asked what their favorite insect was," said Merritt, a third-year UC Davis entomology student and transfer from the College of the Canyons, Santa Clarita.  “It was touching to see how something like mundane doodling could bring smiles to kids' faces. In fact, many ended up going home with original art work!”

Using green and black markers, James Harris, 13, of Winters colored Merritt's drawing of a praying mantis as his father, Rick Harris, watched.  No stranger to the campus, Rick Harris received his master's degree in systematic entomology from UC Davis, studying with major professor Robbin Thorp, distinguished emeritus professor of entomology.  One of Rick's classmates was Lynn Kimsey, now director of the Bohart Museum of Entomology and professor of entomology.

Insect enthusiasts Addie Angle, 13, and her brother, Dalton, 6,  who are enrolled in entomology projects in the Misty Mountain 4-H Club, Nevada City, admired the many art displays, which included arthropod illustrations by Lynn Siri Kimsey, Charlotte Herbert,  Ivani Li and the late Mary Foley Benson. They also colored dragonflies from Dragonflies of North America: A Color and Learn Book with Activities, the work of dragonfly expert/author Kathy Claypole Biggs and illustrator Tim Manolis. This is a close-up of the tattoo that won Karissa Merritt, "best tattoo." It is a Chinese moon moth or Chinese luna moth (Actias dubernardi).
Merritt says insects have always fascinated her. "I've always loved insects and the natural world but I didn't realize entomology was a viable career choice until one of my friends starting working in the Essig Museum of Entomology at UC Berkeley," she said. While attending community college in Santa Clarita ("a suburb of Los Angeles known for its SoCal's Six Flags Magic Mountain, and the location for the new Netflix show The Santa Clarita Diet"), she developed a strong interest in pollinators and “a particular interest in bees and how I can contribute to their future."

"What fascinates me the most about insects is how alien their biology and morphology as compared to vertebrates,” said Merritt, who works at the Bohart Museum and gained beekeeping experience while volunteering at the Elina Niño honey bee lab at the Harry H.Laidlaw Jr. Honey Bee Research Facility.

Another highlight of her insect experiences: last year she attended the ENTOMOLOGY 109: Insect Taxonomy and Field Ecology, aka "Bug Boot Camp," an intensive five-week field course based at the Sagehen Creek Field Station, in California's northern Sierra Nevada. It's taught by noted ant specialist Phil Ward, UC Davis professor of entomology. "I enjoyed collecting insects and identifying them," she said. "My favorite part of the course was being out in nature and exploring the Sierras while catching really cool insects! It was a bit challenging for me, because although I took ENT 100 with Lynn Kimsey the previous fall, my identification skills weren't that great. Overall, it was a wonderful experience, and I always recommend it to people who are interested in entomology!”

Career plans? “I'd like to work with farmers, altering agricultural landscapes for the benefit of pollinators, such as both, native and honey bees,” Merritt said. “I would also like to apply such methods in more urban landscapes, thereby restoring a bit of the ecology lost to urbanization and reuniting communities with nature.”

Yes, she has a favorite order of insects--Hymenoptera. "But working in the Bohart, I find many specimens that just amaze me with their beauty. Insects are just so diverse and it's amazing what nature produces!”

One of her other favorite insects is the Chinese moon moth or Chinese luna moth (Actias dubernardi). A colorful tattoo of the moth on her left forearm won her the tattoo contest at the Bohart Museum open house. She shared prizes (T-shirts or Bohart cups from the Bohart Museum gift shop) with the other winners. biology teacher Jean Replicon of Mission College, Santa Clara, best attired adult, and five-year-old Jasper Ott of Davis, best attired youth. Replicon wore a dress with a lady beetle motif, and Jasper wore a T-shirt with an ant motif. 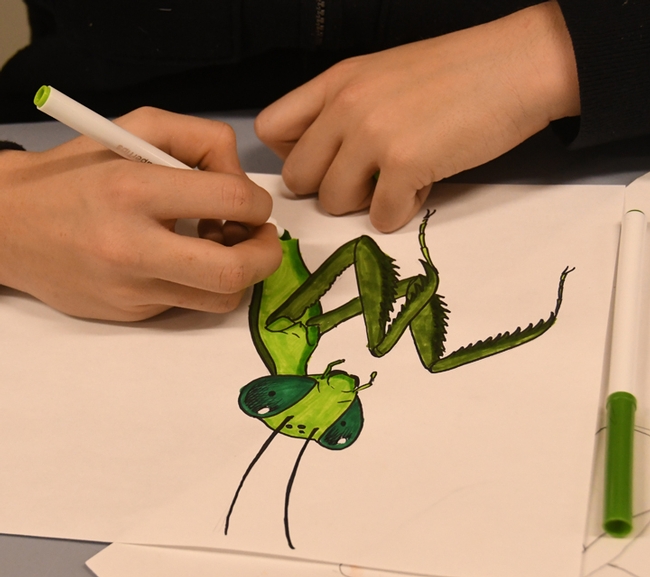 This praying mantis, drawn by Karissa Merritt, is being colored by James Harris, 13, of Winters at the Bohart Museum of Entomology open house. (Photo by Kathy Keatley Garvey) 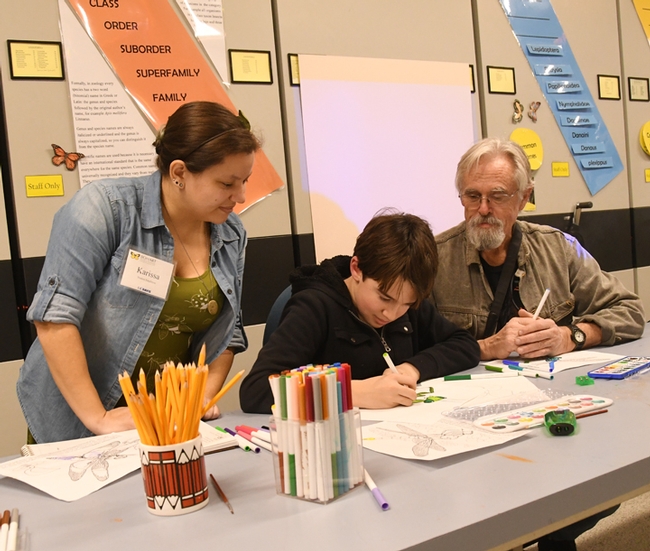 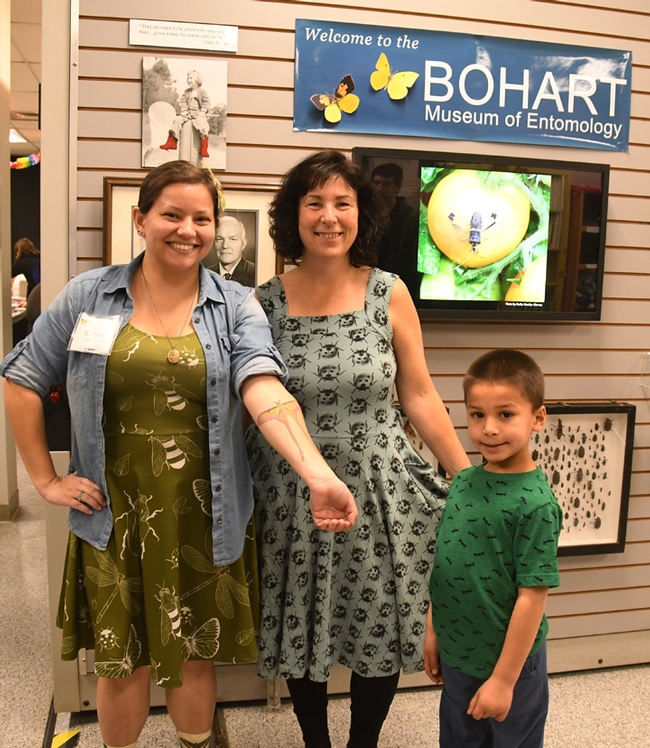