Kent Daane, Cooperative Extension specialist at UC Berkeley, will present a seminar on "Classical Bio-Control of the Spotted Wing Drosophila: Collecting and Processing Parasitoids Through the Quarantine Process" from 4:10 to 5 p.m., Wednesday, April 18 in 122 Briggs Hall, UC Davis.
(Editor's Note: If you missed the seminar, you can view it here on YouTube at https://youtu.be/KVTGmDo2LLQ). Recorded by George Terry of UC Davis Department of Entomology and Nematology)


The spotlight is on spotted wing drosophila, a major fruit crop pest that wreaks economic havoc throughout the world.

Native to Southeast Asia, Drosophila suzukii infests soft-skinned fruits such as strawberries, raspberries, cherries, blueberries, blackberries, peaches and grapes. The insect was first detected in the United States in 2008 when scientists identified it in the central coastal region of California. It can cause an estimated $300 million in damage annually to California crops.

"A classical bio-control program has been undertaken against the olive fly using parasitoids imported from Africa and the spotted wing drosophila, both newly invasive species in California," Daane says. "Drs. Xingeng Wang and Antonio Biondi have been cooperating with other researchers in California, Oregon, Delaware, Hawaii, Italy, China, South Africa, South Korea and France by quarantine screening imported parasitoid species to determine their potential to control these invasive pests without causing any harm to non-target insects. The quarantine work is like the gatekeeper that screens imported material to allow only those natural enemies that will be beneficial into California."

The spotted-wing drosophila was first observed in Japan as early as 1916. The females lay their eggs in ripe and ripening fruit, unlike other Drosophila species known to infest overripe and blemished fruit. The larvae feed on the fruit. The adult is the only stage that can be targeted for control by conventional pesticides, according to integrated pest management specialist Frank Zalom, distinguished professor of entomology at UC Davis.  The most commonly used insecticides are organophosphates, pyrethroids and spinosyns.

Daane, who received his doctorate in entomology from UC Berkeley, focuses his research on the development of ecologically-based insect pest management systems. His research studies include classical biological control, augmentation programs, insect-plant interactions, use of least-disruptive insecticides and the biology of natural enemies." 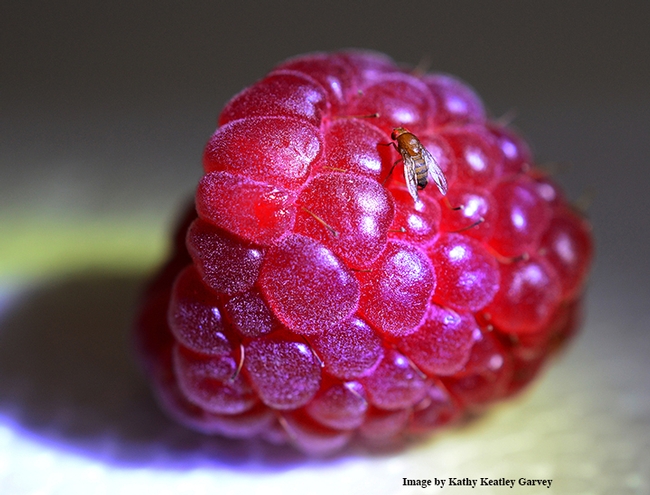 Spotted Wing Drosophila, Drosophila suzukii, on raspberry. (Photo by Kathy Keatley Garvey)
Focus Areas:
Focus Area Tags: Agriculture, Economic Development, Innovation, Natural Resources, Pest Management
Tags: Drosophila suzukii (4), Kent Daane (1), spotted wing drosophila (2), UC Davis Department of Entomology and Nematology (544)
Comments: 2
Comments:
by Doug S Arnold
on April 17, 2018 at 4:39 AM
I really wish many of the lectures could be recorded so those of us down south could see them. This is an important lecture that we will miss!
by Kathy Keatley Garvey
on April 19, 2018 at 6:26 PM
Hi, Doug,
Thanks for your email. George Terry of the UC Davis Department of Entomology and Nematology recorded Kent Daane's seminar. It's on You Tube at https://youtu.be/KVTGmDo2LLQ
Leave a Reply: