Bug Squad
sitenum=63
Happenings in the insect world
And the (Bee) Beat Goes On...

It was bound to happen.

A "real" honey bee flying alongside "fake" bees on a bee crossing sign.

Back in the 1934 French scientists August Magnan and André Sainte-Lague calculated that honey bees shouldn't be able to lift off, much less fly at all.  However, they presumed bee wings are stable, like airplane wings, when in fact, they're not. Honey bees flap and rotate their wings some 240 times per second, according to research, "Short-Amplitude High-Frequency Wing Strokes Determine the Aerodynamics of Honeybee Flight," published in December 2005 in the Proceedings of theNational Academy of Sciences (PNAS).

The researchers, from the California Institute of Technology, pointed out that a fruit fly is 80 times smaller than a honey bee and flaps its wings 200 times each second, while the much larger honey bee flaps its wings 240 times every second. To stay aloft, a honey bee uses short wing strokes of less than 90 degrees and a high number of flaps.

"This flapping, along with the supple nature of the wings themselves, allows a bee--or any flying insect, for that matter--to create a vortex that lifts it into the air," explained David Biello in a Nov. 29, 2005 piece in Scientific American.

Or, technically, as the researchers wrote in their abstract: "Most insects are thought to fly by creating a leading-edge vortex that remains attached to the wing as it translates through a stroke. In the species examined so far, stroke amplitude is large, and most of the aerodynamic force is produced halfway through a stroke when translation velocities are highest. Here we demonstrate that honeybees use an alternative strategy, hovering with relatively low stroke amplitude (≈90°) and high wingbeat frequency (≈230 Hz). When measured on a dynamically scaled robot, the kinematics of honeybee wings generate prominent force peaks during the beginning, middle, and end of each stroke, indicating the importance of additional unsteady mechanisms at stroke reversal.

"When challenged to fly in low-density heliox, bees responded by maintaining nearly constant wingbeat frequency while increasing stroke amplitude by nearly 50%. We examined the aerodynamic consequences of this change in wing motion by using artificial kinematic patterns in which amplitude was systematically increased in 5° increments. To separate the aerodynamic effects of stroke velocity from those due to amplitude, we performed this analysis under both constant frequency and constant velocity conditions. The results indicate that unsteady forces during stroke reversal make a large contribution to net upward force during hovering but play a diminished role as the animal increases stroke amplitude and flight power. We suggest that the peculiar kinematics of bees may reflect either a specialization for increasing load capacity or a physiological limitation of their flight muscles."

And the (bee) beat goes on...even with that heavy load of nectar or pollen... 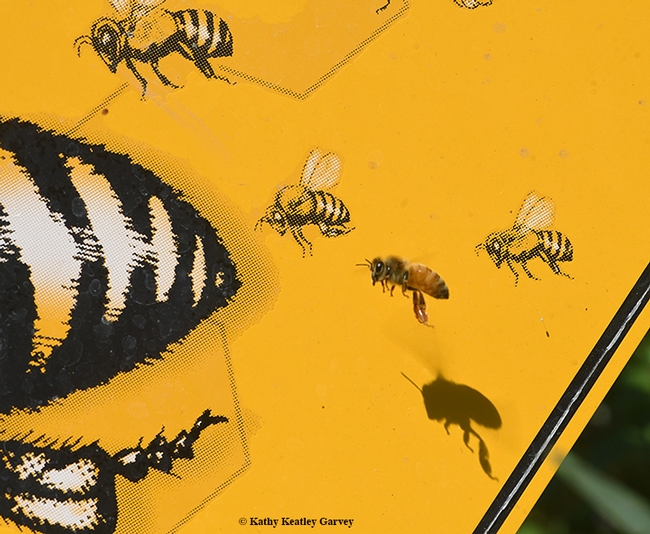 A honey bee flies in formation with "fake" bees on a bee crossing sign. Bees can flap their wings around 240 times per second. (Photo by Kathy Keatley Garvey) 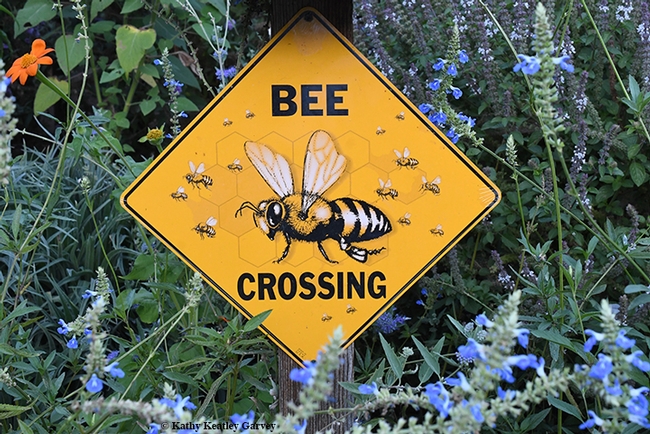 It's almost flyover time again. Blue spike sage (Salvia uliginosa) is in the foreground. (Photo by Kathy Keatley Garvey)
Focus Areas:
Focus Area Tags: Agriculture, Environment, Natural Resources
Tags: Bee Crossing sign (1), bee flight (1), California Institute of Technology (1), honey bees (390), Scientific American (1)
Comments: 1
Comments:
by Fay
on August 23, 2018 at 5:32 AM
WOW! So much information about a flying bee! Who knew? Your photo is superb and put a smile on my face! What a great way to start my day! And the "bee" goes on! (Not fake news!)
Leave a Reply: