It starts out slow.

Beginning in the spring (and sometimes year-around in some locales) Gulf Fritillaries (Agraulis vanillae) lay their eggs on their host plant, the passionflower vine (Passiflora).

They deposit their eggs on the tendrils, on the leaves, and sometimes on the fence, wall or door where the passionflower vine climbs.

When fall approaches and the Gulf Frits are still laying eggs, you won't recognize your vine. It is skeletonized. The caterpillars, incredible shredding machines, have devoured all the leaves, leaving nothing but scarred sticks. And the 'cats are now gobbling up the remaining fruit. Hungry, hungry caterpillars!

Your plant, now incognito, looks like it should be in the Federal Witness Protection Program--and you have to defend yourself for "being a bad gardener."

But that's why we plant the Passiflora: for the Gulf Frits.

"No plant wants to be eaten," wisely observes Bruce Hammock, a UC Davis distinguished professor with a joint appointment in the Department of Entomology and Nematology and the UC Davis Comprehensive Cancer Center. "They all have defenses.  They do not like insects, fungi, cows or even vegetarians that eat them."

At the time, Professor Hammock was talking to a reporter about toxic plants, and how we have bred many poisons out of plants or learned to not eat the most toxic parts. "In some cases, we like the taste of the poisons: cinnamon, potato, parsley, and  mustard," Hammock told him.

In the case of the passionflower vine, aka Scraped Skinny Stick, it probably wishes (if plants could wish) and wonders (if plants could wonder) "Why am I so attractive?" and "Where are all the birds, wasps and other predators of caterpillars when I need them?" 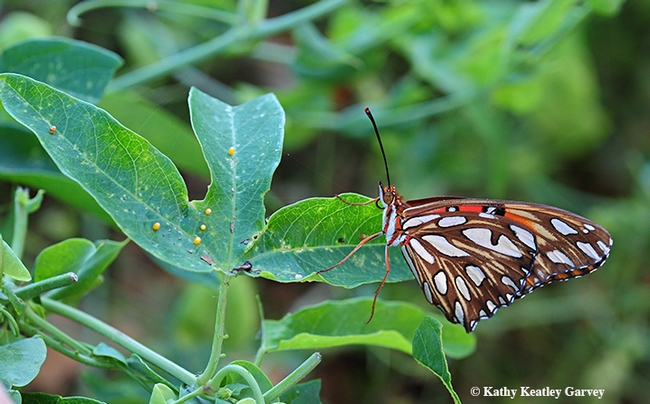 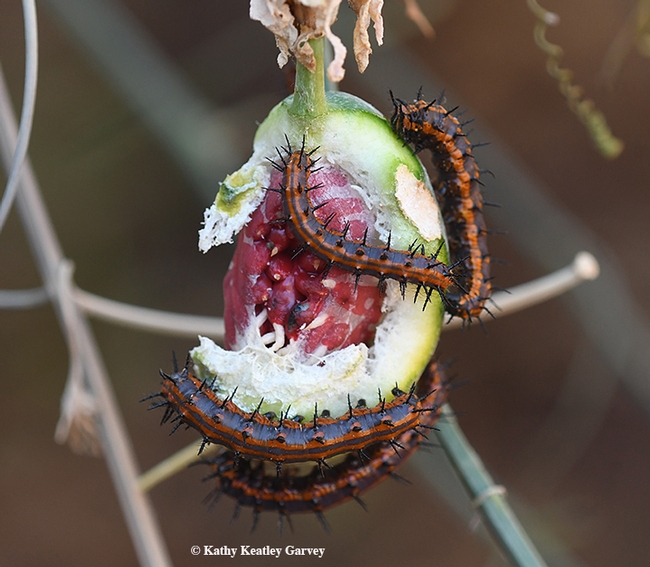 By fall, the only thing left on the passionflower vine is the fruit. The leaves are gone. The hungry caterpillars are like insect shredding machines. (Photo by Kathy Keatley Garvey) 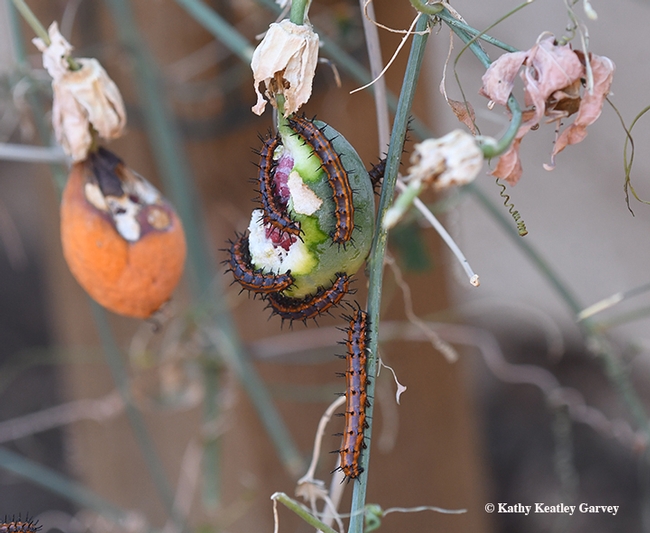 No leaves--just fruit--remain on this skeletonized passionflower vine. (Photo by Kathy Keatley Garvey) 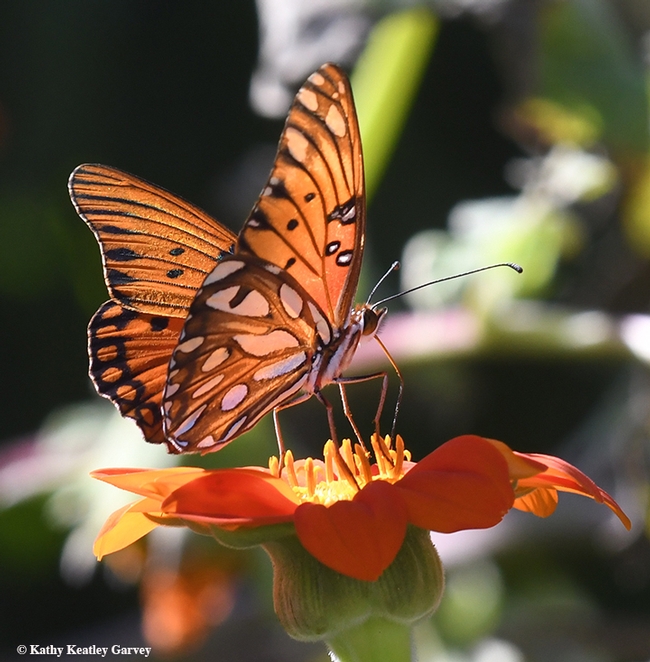 The end result: a Gulf Fritillary adult. This one is nectaring on a Mexican sunflower, Tithonia. (Photo by Kathy Keatley Garvey)
Focus Areas:
Focus Area Tags: Environment, Natural Resources, Yard & Garden
Tags: Agraulis vanillae (69), Bruce Hammock (53), Gulf Fritillary (49), Passiflora (38), passionflowervine (2), UC Davis Department of Entomology and Nematology (320)
Comments: 1
Comments:
by Laurie Hildebrandt
on October 18, 2018 at 8:14 AM
Hello, Curiously, the passionflower vine in my yard looks great right now: plenty of foliage. There have been far fewer fritillaries around this year so apparently not enough in the population to strip the vine.
Previous years, the last four or five, the plant has been stripped. Prior to that, the butterflies were not residents of our yard. I remember that first year when the vine looked so dead! It was shocking. Now, the greenery is a sad thing.
Laurie
Leave a Reply: