Bug Squad
sitenum=63
Happenings in the insect world
'Giving Tuesday': Giving Back to the Bohart Museum of Entomology This ruby-tailed wasp, the work of Levon Biss, measures 5x6 feet. The Bohart Museum hopes to acquire another microsculpture by Biss.
"Giving Tuesday," held the first Tuesday after Thanksgiving, is a good day to give back, to say "Thank you for all you do!"

The 92nd Street Y and the United Nations Foundation launched "Giving Tuesday" in 2012 in response to the troubling commercialization and consumerism in the post-Thanksgiving season (think Black Friday and Cyber Monday).

A very worthy benefactor on "Giving Tuesday" is the UC Davis Bohart Museum of Entomology, located in Room 1124 of the Academic Surge Building on the UC Davis campus.

When you think of the Bohart Museum, you think of excellence: excellent scientists, staff and volunteers. The insect museum houses Lynn Kimsey, director of the Bohart Museum (Photo by Kathy Keatley Garvey)
The Bohart Museum's outreach efforts are widespread and much appreciated: from classroom visits to open houses. Tabatha Yang, education and outreach coordinator, and associates provide educational programs to classrooms and at special events, such as exhibitions at the Davis Explorit Science Center,  California State Fair and Solano County Youth Ag Day. Youths learn about insects and other arthropods and eagerly hold the walking sticks and Madagascar hissing cockroaches.

Another key part of the Bohart Museum outreach efforts: they host open houses at scheduled times on weekends throughout the academic year. On the campuswide Picnic Day, the Bohart draws as many as 4000 visitors. Thousands also attend the UC Davis Biodiversity Museum Day. (See video on YouTube).

Scientists throughout the world study the insect collection.

What does the Bohart need?

"Support for our outreach programs," said Kimsey. "I would love to get another photograph like the Biss one we have in the hall."

That would be like the newly acquired 5x6-foot photographic image or "microsculpture" of a cuckoo or emerald wasp, the work of noted British photographer Levon Biss. The “cuckoo” name refers to the fact that the female lays her eggs in the nests of unsuspecting hosts, including the sand wasp. The larvae of the cuckoo wasp then consume the host eggs, larvae and the stored food. The wasp is found throughout Europe but not in the United States.

Biss, based in London, works across many genres, including news, sports, portraiture and insects. He credits his son, Sebastian, for developing his interest in insects. Sebastian found a ground beetle in their backyard and Dad photographed it. That led to a collaboration with the Oxford Museum of Natural History, where Biss gained access to the museum's historical collection of insects, including some collected by Charles Darwin.

Biss now creates micro-scale images for what he calls his Microsculpture series. Over a two-year period, he photographed 37 insects from the Oxford collection. To create the final insect portraits, he composites thousands of images using multiple lighting setups. Biss says he photographed most of them in about 30 sections, “each section lit differently with strobe lights to accentuate the microsculpture of that particular area of the body.”

In October 2017, Biss drew rave reviews for his TED talk, Mind-Blowing Magnified Portraits of Insects. That led to a world gallery tour of his images; his show is now at the Houston (Texas) Museum of Natural Science, July 13, 2018 through Jan. 13, 2019.

Unlike many insect museums, the Bohart Museum is open to the general public four days a week:  Mondays through Thursdays, from 9 a.m. to noon and from 1 to 5 p.m., plus occasional, weekend open houses​. Admission is free.

Interested in helping out the Bohart Museum on #GivingTuesday? Checks may be made out to the "Bohart Museum Society" and mailed to: 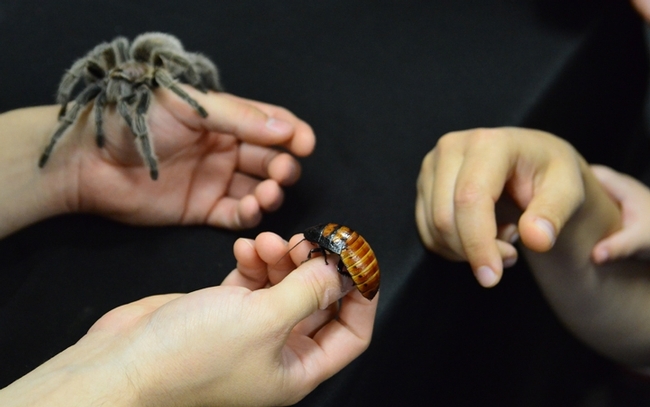 A tarantula and a Madagascar hissing cockroach are favorites at the Bohart Museum of Entomology's live "petting zoo." (Photo by Kathy Keatley Garvey) 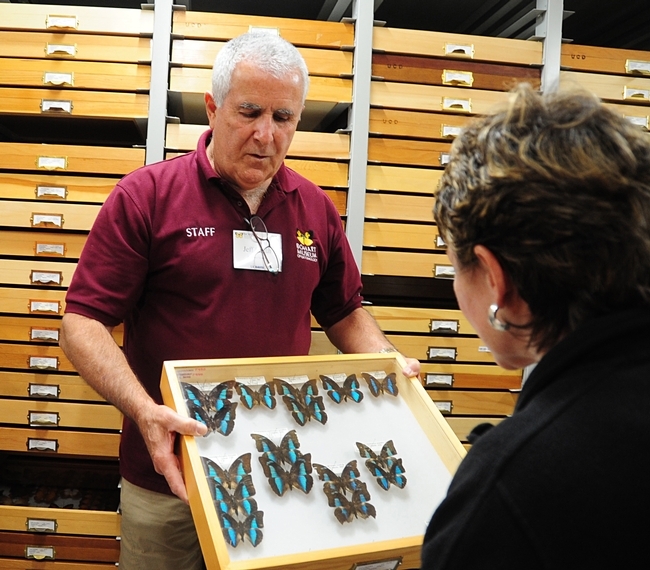