The scientists and butterfly/moth enthusiasts who gathered Saturday, Feb. 9 for the Northern California Lepidoptera  Society meeting in the Bohart Museum of Entomology at the University of California, Davis, did all that: identify specimens and engage in collaboration and camaraderie.

In their meeting notice, Heydon, DeBenedictis and Smith noted that those attending could bring specimens, photos, PowerPoint presentations "or slides from collecting trips and tales of collecting triumphs to share with others
and that "attending lepidopterists may be able to help you identify specimens and the museum collection will be open for yoour inspection." Christopher Jason, who received his bachelor's degree in environmental science from UC Davis last year holds his butterfly collection. (Photo by Kathy Keatley Garvey)
Christopher Jason, a recent UC Davis graduate in environmental science, was there with his collection. In March he will head to Washington State University, the Vancouver, campus, to work as a technician in the lab of conservation biologist/associate professor Cheryl Schultz, who researches at-risk butterflies in Pacific Northwest Prariries. Or, as Schultz. writes on her website: "Human-caused changes in the earth's ecosystems are responsible for the decline and extinction of the world's biological diversity. In the Conservation Biology Research Group, we study the ecology of at-risk species in response to key drivers: habitat loss, habitat fragmentation, habitat degradation, invasive species, alteration of ecosystem process, and global climate change. Using a population-ecology lens, we use field and quantitative methods to address pivotal ecological questions. We seek to understand the relative contributions of individual, population and landscape-level processes to the population viability of endangered species as these processes interface with realistic conservation interventions. Our work largely uses at-risk butterflies in Pacific Northwest Prairies as a model system to address fundamental ecological questions while simultaneously tackling focal questions to guide on-the-ground practice."

Retired public health entomologist and Bohart associate Dick Meyer of Bakersfield, known as "the mosquito guy," was there. He recently retired as assistant manager of the Orange County Vector Control Agency. He did not bring any of his collection, but he did tell us that he has 225 drawers of insects at home, including 71 drawers of butterflies. "Did you know that the highest diversity of butterflies in the country is in Kern County?" he asked. Meyer, who holds a doctorate in entomology, studied with major professor Richard M. Bohart Jr., for whom the Bohart Museum is named.

At the last gathering in the Bohart, Kelly Richers, who compiles the California Moth Specimen Database, maintained at the Essig Museum since 1996 as a resource to better survey and understand California moths, said of the systematists:  "We're a dying breed."

This year self-described "aspiring entomologist" Madison Cunha of Modesto attended with her mother, Christine Cunha. True to her love of insects, Madison wore a dress adorned with a beetle pattern.

Scientists say that 180,000 species of the Lepidoptera are described, in 126 families and 46 superfamilies.

"The Lepidoptera are among the most successful groups of insects. They are found on all continents, except Antarctica, and inhabit all terrestrial habitats ranging from desert to rainforest, from lowland grasslands to mountain plateaus, but almost always associated with higher plants, especially angiosperms (flowering plants). Among the most northern dwelling species of butterflies and moths is the Arctic Apollo (Parnassius arcticus), which is found in the Arctic Circle in northeastern Yakutia, at an altitude of 1500 m above sea level. In the Himalayas, various Apollo species such as Parnassius epaphus have been recorded to occur up to an altitude of 6,000 miles above sea level."--Wikipedia. 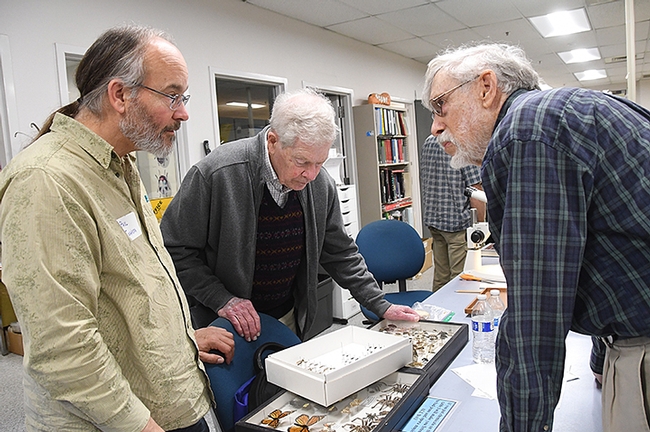 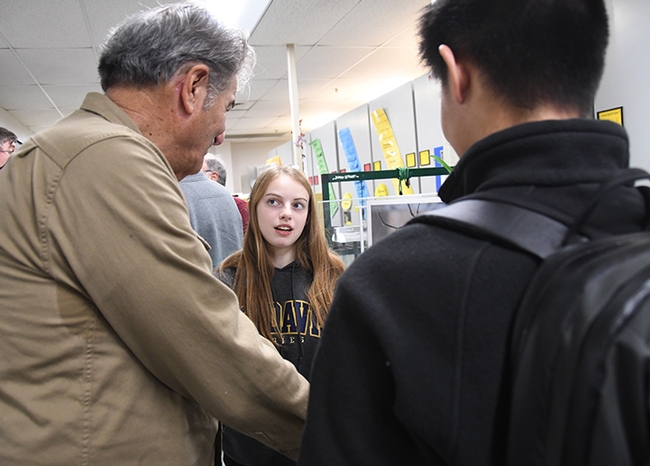 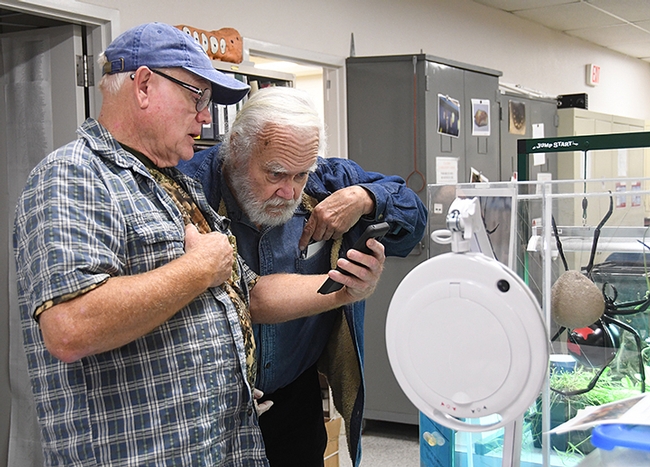 Dick Meyer, who holds a doctorate in entomology from UC Davis, clarifies a butterfly question with hobbyist Jeff Baier of Napa. (Photo by Kathy Keatley Garvey) 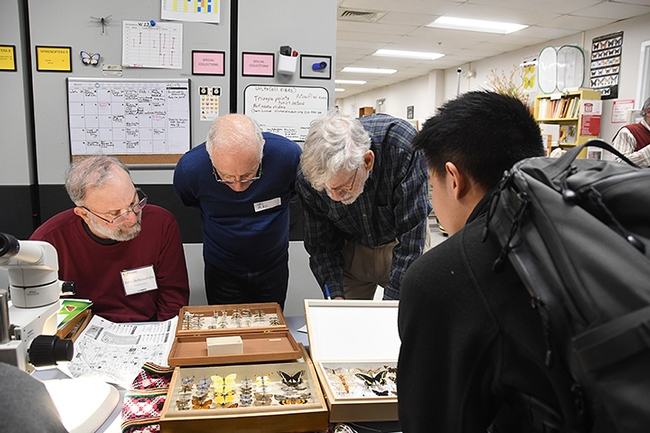 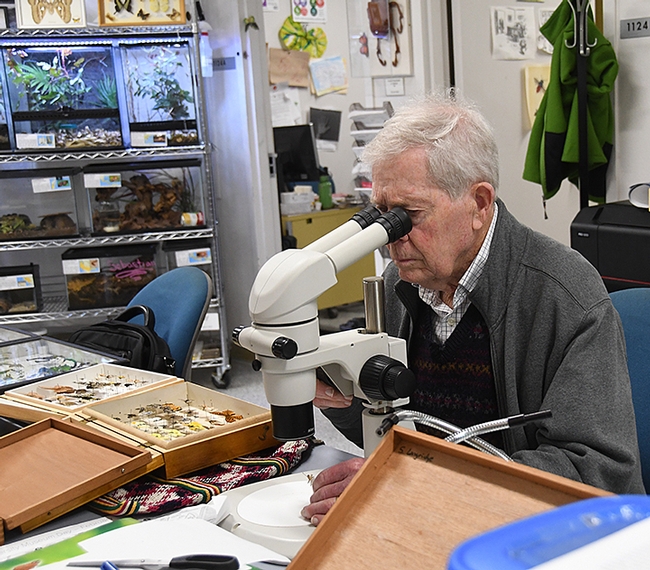 Jerry Powell, emeritus director of the Essig Museum of Entomology, examines a specimen under the microscope. (Photo by Kathy Keatley Garvey) 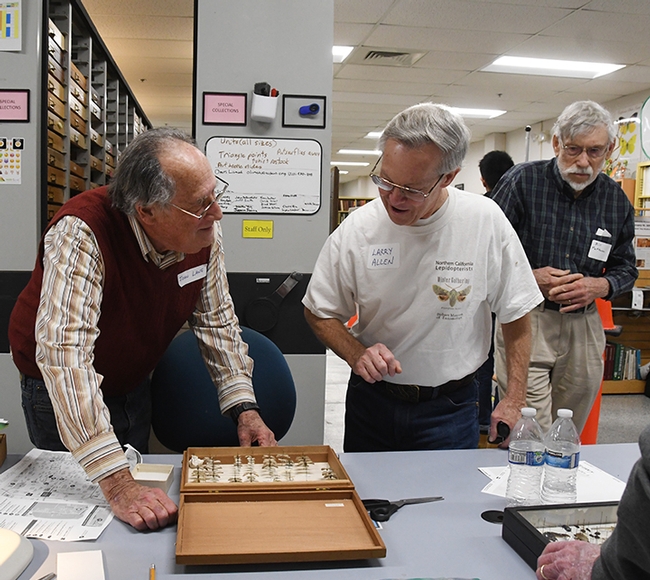 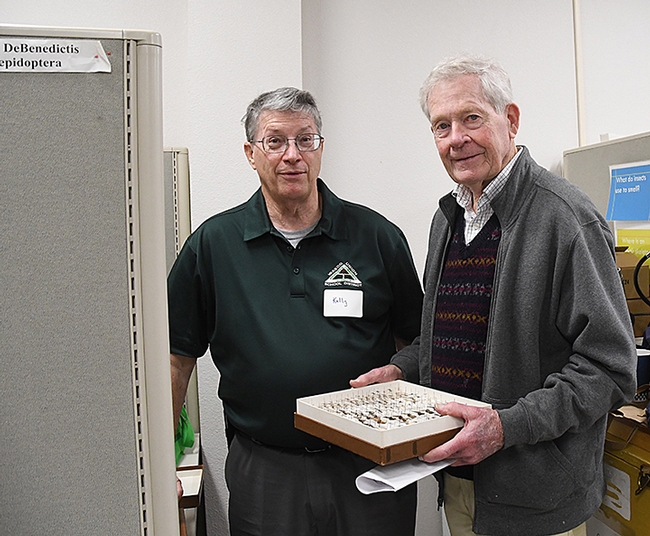 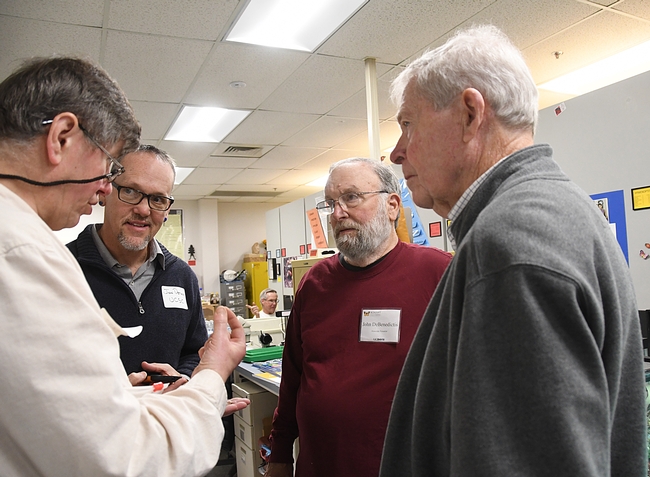 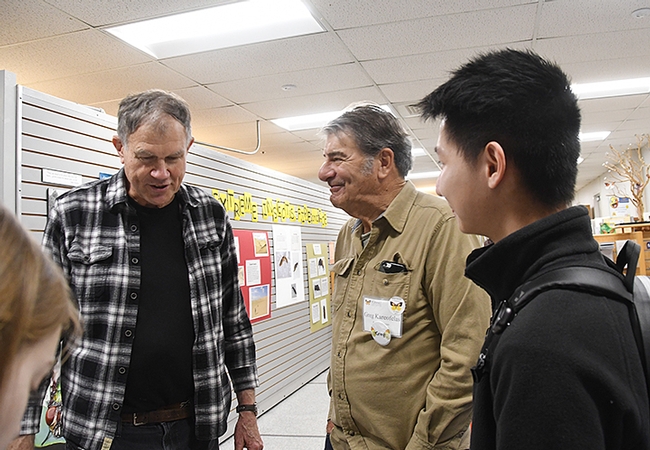 Rosser Garrison (left) retired from the California Department of Food and Agriculture and co-author of a dragonfly book, talks dragonflies with Greg Kareofelas (center) and Christopher Jason. (Photo by Kathy Keatley Garvey) 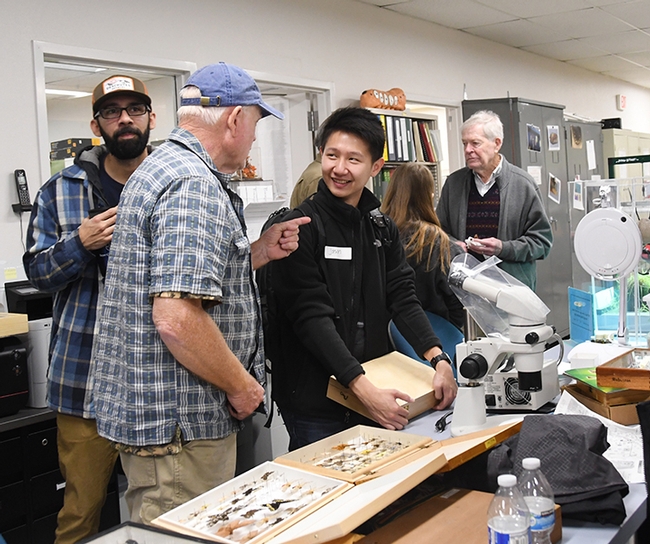 Engaged in conversations (from left) Joel Hernandez, Dick Meyer and Christopher Jason, all who received degrees from UC Davis. At far right is Jerry Powell, emeritus director of the Essig Museum. (Photo by Kathy Keatley Garvey) 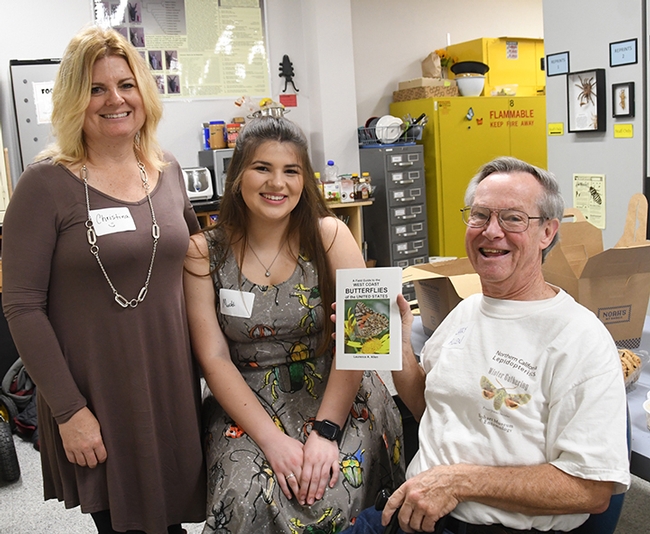 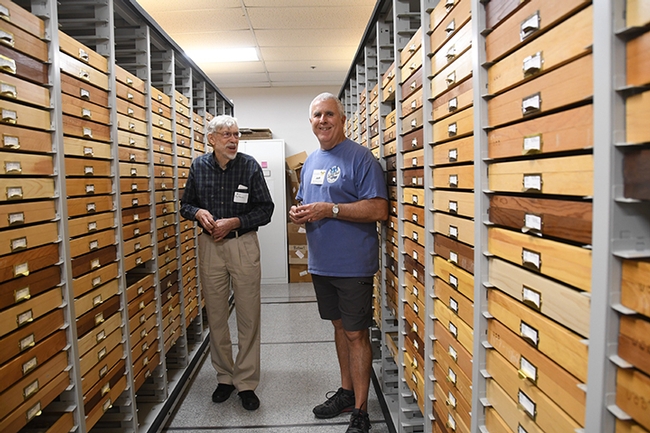 Bill Patterson (left), who holds a doctorate in entomology from UC Davis, and entomologist Jeff Smith, who curates the butterfly-moth section at the Bohart Museum of Entomology. (Photo by Kathy Keatley Garvey) 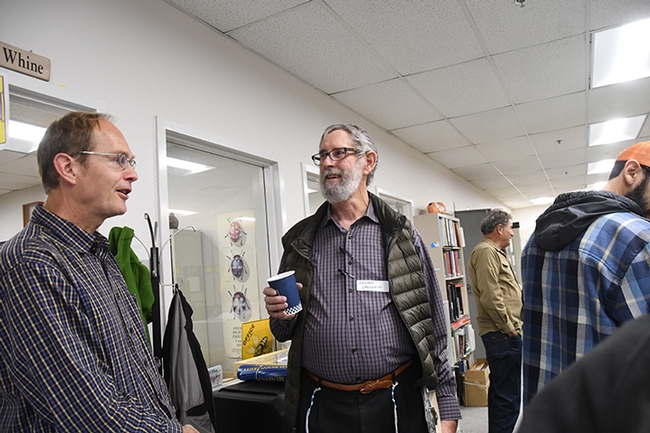 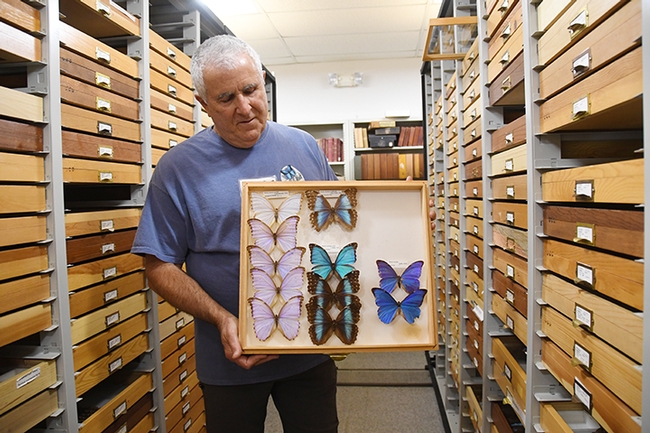