When you're 5 years old, the world is full of wonders.

Especially when your mother takes you to the Bohart Museum of Entomology to see the butterfly specimens.

Such was the case when Cash Belden, 5, and his mother, Michelle Belden (she's the coordinator of the campus Aggie Surplus, formerly the Bargain Barn) attended the Bohart Museum open house during the eighth annual campuswide UC Davis Biodiversity Museum Day.

Little Cash especially liked the monarchs and the blue morphos.

Entomologist Jeff Smith, who curates the butterfly/moth section at the Bohart, showed them around. He estimates the Bohart has half a million Lepidoptera in the collection, about 60 percent moths and 40 percent butterflies.

He mentioned the "defensive strategies these insects use for survival, such as camouflage, warning coloration, mimicry of other species."

"We love to teach about the importance of Lepidoptera in the environment, either to their habitat directly or possibly as an indicator of the health of their habitat."

And, of course, there's the beauty of the insects.

Next time it's spiders!

The next open house, themed "Eight-Legged Wonders" and featuring spiders, is set from 1 to 4 p.m., Saturday, March 9. in Room 1124 of the Academic Surge Building on Crocker Lane. It's free and family friendly. Professor Jason Bond, the Evert and Marion Schlinger Endowed Chair in Insect Systematics in the UC Davis Department of Entomology and Nematology, will host a slide show at 1 p.m.  Visitors will see specimens and can engage in interactive activities and family arts and crafts.

The Bohart Museum, home of a global collection nearly eight million specimens, is directed by Lynn Kimsey, professor of entomology at UC Davis. It is also the home of the seventh largest insect collection in North America, and the California Insect Survey, a storehouse of the insect biodiversity. Noted entomologist Richard M. Bohart (1913-2007) founded the museum.

The Bohart Museum's regular hours are from 9 a.m. to noon and 1 to 5 p.m. Mondays through Thursdays. The museum is closed to the public on Fridays and on major holidays. Admission is free. Open houses, focusing on specific themes, are held on weekends throughout the academic year. More information on the Bohart Museum is available by contacting (530) 752-0493 or Tabatha Yang, education and public outreach coordinator at tabyang@ucdavis.edu. 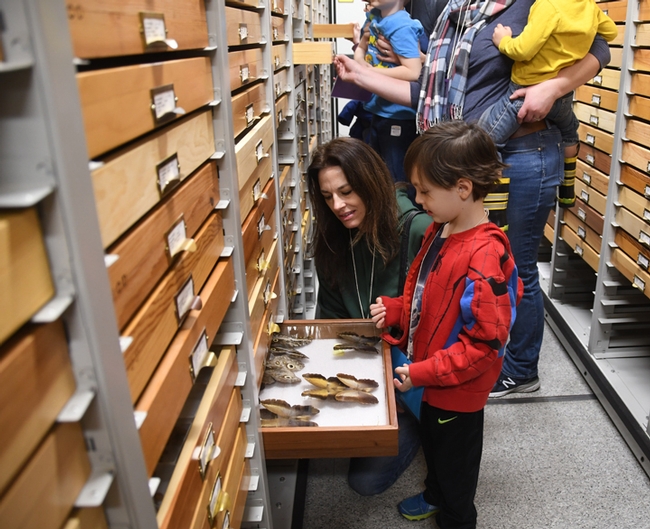 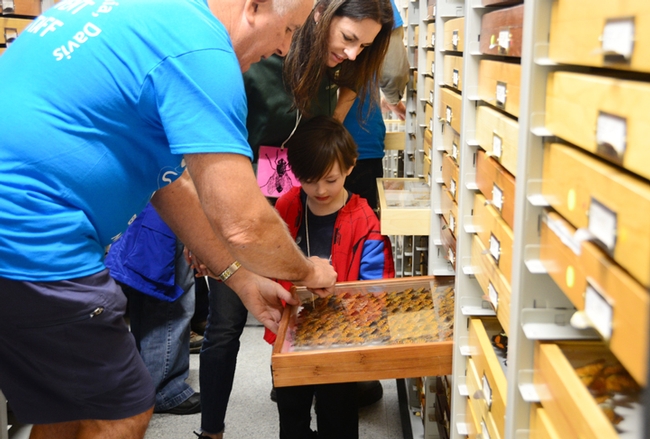 Entomologist Jeff Smith, curator of the Lepidoptera section at the Bohart Museum, shows a drawer full of butterflies to Michelle Belden and son, Cash, 5. (Photo by Kathy Keatley Garvey) 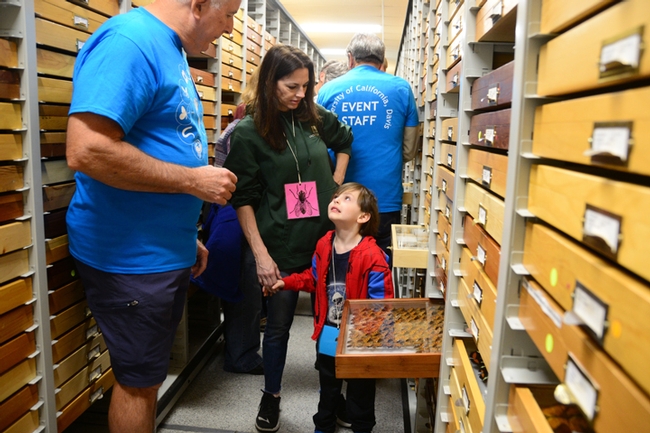 Entomologist Jeff Smith, curator of the Lepitopdera section at the Bohart Museum, talks to Michelle Belden and son, Cash, 5. In back is Bohart associate Greg Kareofelas, naturalist and photographer who helps conduct the butterfly/moth specimen tours. (Photo by Kathy Keatley Garvey) 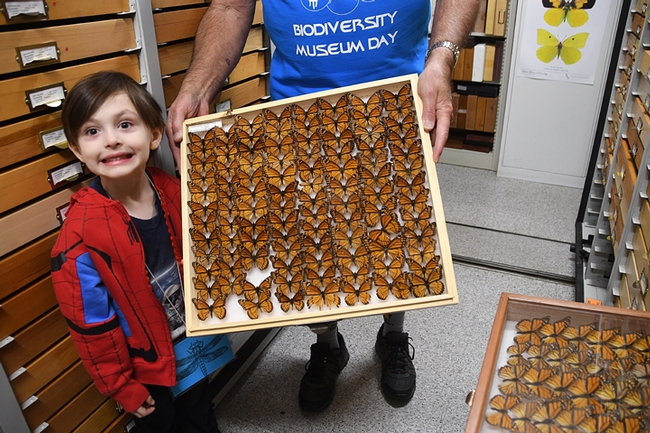