I’m fat. Whose fault is that?

As the workshop speaker explained that school foods are contributing to the growing epidemic of obesity among children, I slumped in my chair and flashed back to high school. At the 10:20 a.m. break, I could be found standing in line at the high school snack bar ordering a chocolate milk shake and a bag of nacho cheese Doritos. Daily.

UC Berkeley professor Michael Pollan and others argue that farm policy is to blame for our corpulence. Many reference a 2002 USDA-ERS study that shows Americans ate 12 percent more (300 calories) in 2000 than we did in 1985, and point out that the federal government subsidizes common ingredients of snack foods -- corn, wheat, soybeans and rice -- making them cheaper and more available to consumers.

But UC ag economists Julian Alston and Dan Sumner, who analyzed the links between farm policies and obesity, disagree.

"Farm prices are a small share of retail prices so even if subsidies made farm prices lower and those were passed on, they would have little retail impact," Sumner told me. "Moreover, for some important products such as dairy and sugar, farm policies raise prices."

Policies are being made to steer us toward more healthful choices. For example, soda cannot be sold in California schools. Growing up, I had unlimited access to soda. As an adult, I eschew soda. It’s hard to say whether my beverage preference changed due to education or just being a finicky eater, but informing consumers can influence their food choices.

The new law mandating publishing calories on menus has had a modest effect on purchases, but over the course of a year, could prevent a person from gaining 4 to 8 pounds, said Gail Woodward-Lopez, co-director of the Center for Weight and Health at UC Berkeley.

Lucia Kaiser, UC Davis nutrition specialist, reports that low-income consumers will buy fresh fruits and vegetables if given an incentive. In a Los Angeles pilot project, mothers were given $40 to buy fruits and vegetables. The study found that 6 months later, the women continued to consume more fresh produce.

Virtually all children attending public schools are offered school lunches. Many California schools have begun farm-to-school programs, working with local farmers to offer students fresh salad bars. Past UC studies have shown that students given a choice of fresh fruits and vegetables will eat them.

“Uniting policy with education is the way to go,” says Woodward-Lopez.

Despite my steady diet of junk food as a youth, my weight didn’t expand into triple digits until my mid-30s. Now I exercise, avoid chips and shakes and eat lots of fresh fruit and vegetables, but have become fat. Whose fault is that?

Presentations made by Alston, Woodward-Lopez, Kaiser and others at the Farm and Food Policy and Obesity workshop are posted at http://aic.ucdavis.edu/obesity/index.htm. 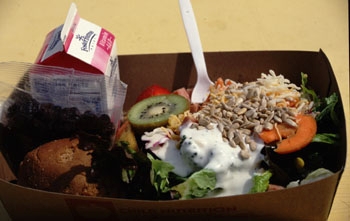