Now that spring is here, the garden centers are adverting, potting soil, garden soil, and other bagged soils on sale.  But be aware that not all packaged soils are the same.  There are generally some basic differences between the types of soils, and in the different types of similar soils and ratios of contents.  Let's first take a look at the different types of bagged soils you'll encounter.  Note that there are no legal definitions for the various types of bagged soil, so it's important to read what's in the bag to make sure you're purchasing what you believe is in the bag, and it is what you want.

Potting soil.  Bagged potting soil usually does not contain dirt.  Generally used for container gardening, it usually is a mix of peat moss, composted pine bark, and some other organic materials.  Water drains out from potting soil easily.

Garden soil.  Garden soil usually contains a percentage of dirt in it.  It retains water and is used for in-ground planting.

Topsoil.  Topsoil is technically the upper ten to twelve inches of soil.  Thus the natural topsoil ranges depending upon location.  As stated earlier, because there is no legal definition for bagged topsoil, what's in the bag can vary greatly.  Bagged topsoil can be clay or sand or loam or other types of soil mixed with compost and or fertilizer.  Never make any assumptions regarding what's in a bag labeled as “topsoil.”  You need to read the contents on the bag.

Seed starting mix.  These mixes generally have no dirt and have a finer texture than potting soil.  These mixes usually contain peat moss, perlite and/or vermiculite and coconut coir fiber.

Planting mix.  These mixes are usually targeted for growing shrubs or trees and contain extended-release fertilizers.  They frequently can contain peat moss, bark, and loamy soil.

As stated earlier, not all bagged soils are equal.  The contents and percentages of substances in each bagged product vary by manufacturer.  These differences in contents and percentages of nitrogen, soil pH levels etcetera are illustrated in an analysis of thirty four commercial packaged soil amendments done by UC's Chuck Ingels and the Sacramento MGs done in 2012.  You can find the analysis at http://sacmg.ucanr.edu/files/149698.pdf.

So be sure to read the contents of the packaged soil you're intending to purchase to make sure it contains what you are expecting it to contain. 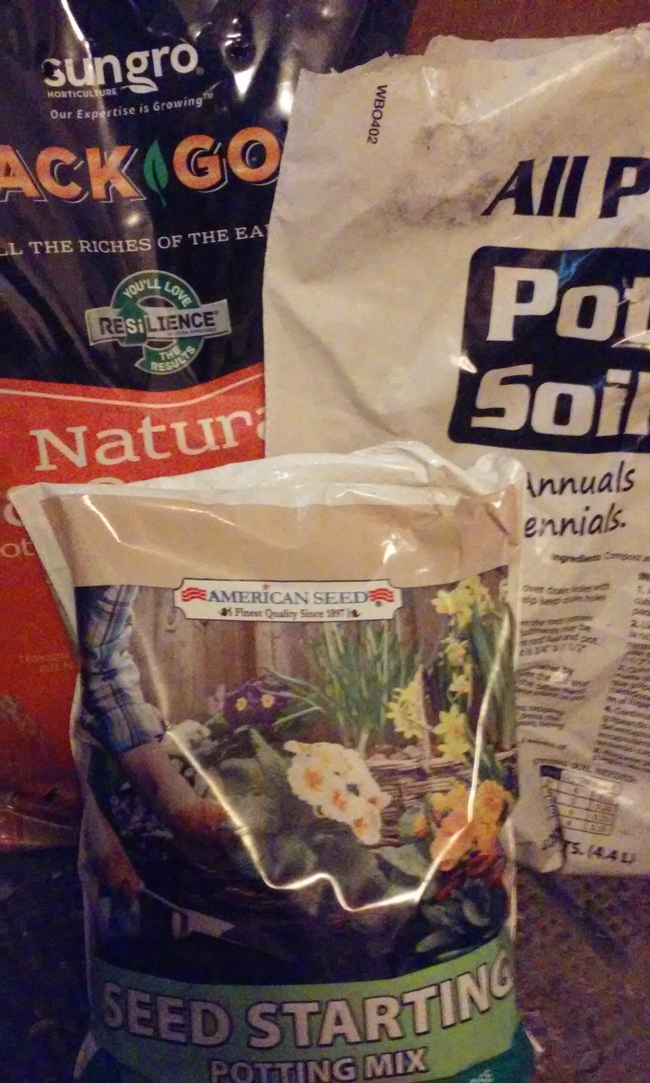 Comments: 5
Comments:
by Launa Herrmann
on April 30, 2019 at 12:45 PM
Good reminder, Kathy.
by Steven Goetz
on May 4, 2019 at 11:04 AM
Do you have info on availability of pasteurized soil or pathogen-Free soil.
by Kathy Low
on May 13, 2019 at 1:16 PM
Steven,
Bagged soils are made with sterile ingredients and chemically treated to kill pathogens. That being said, there are times when you may open a new bag of soil and find gnats or other bugs in it. Chances are that bag of soil has been stored in the rain or another wet environment and gnats or other bugs have entered in the bag through small holes. If you open a new bag of soil and find bugs in it, I'd return to the store where you purchased it. Kathy
by Eli Richardson
on February 22, 2021 at 7:21 AM
I'm glad you talked about the different types of bagged soils. My wife and I are gardening enthusiasts, and we've started a project in our backyard. With spring coming up, we want to be ready to make our plants and flowers grow healthy, so we want to get the best soil for them. We think that your article will help us choose the best soil for us. Thanks for helping us learn about the importance of reading the bag's information before purchasing the soil.
by Jessie Holloway
on October 25, 2022 at 2:24 PM
Thanks so much for explaining what topsoil is and what to consider when planting a garden. My sister wants to add a garden in her backyard and she's looking into getting topsoil for it. We'll have to look into the companies we look at the make sure we're getting quality stuff.
Leave a Reply: