The Real Dirt Blog
sitenum=298
Blog written by UC Master Gardeners of Butte County
Be on the Lookout for the Asian Citrus Psyllid
Published on: May 3, 2019

By Jeanette Alosi, UC Master Gardener of Butte County, May 3, 2019

Butte County is known for its delicious citrus. Mandarins are grown commercially in our “banana belt” foothills, and residents in the valley can enjoy citrus grown in their own gardens. However, a tiny flying insect the size of an aphid poses a grave threat to our local citrus. This insect is the Asian citrus psyllid (ACP), a vector for a dangerous and fatal bacterium (Candidatus Liberibacter asiaticus) that causes Huanglongbing (HLB) disease, previously known as Citrus Greening disease. HLB has devastated the Florida citrus industry and has been found in Southern California. Recently the Asian citrus psyllid itself (but not HLB) was found in Sacramento, just 100 miles south. Map of ACP and HLB spread by ANR
The Asian citrus psyllid and HLB originated in eastern Asia or in the Indian subcontinent and has spread rapidly throughout the world. In 1998 the psyllid along with HLB disease was found in Florida. Within 3 years HLB had infected most citrus-growing regions in Florida. This infection was traced to an infested shipment of orange jasmine (Murraya paniculate) in the family Rutaceae, the same family as citrus. Other susceptible ornamentals in this family include Indian curry leaf, calamondin and mock orange.

There is no cure for HLB, which can kill a tree in 5 to 8 years. Because HLB can only be spread via the ACP, the key to prevent HLB is monitoring for, and controlling, the psyllid. ACP adult and nymphs with white tubules by ANR
Identification of the Asian Citrus Psyllid (ACP): The winged adult ACP is about the size of an aphid. It has a pointy front end, red eyes, and short antennae. It feeds at a unique 45-degree angle, with its head down and its back end in the air.

Adults only live for a few months but can lay several hundred tiny, yellow-orange, almond-shaped eggs in fresh new citrus growth. The tiny wingless nymphs hatch from the eggs and are yellow, orange or brown. They molt 4 times, increasing in size each time.

ACP nymphs only feed on new citrus shoots and leaves. As they feed, a toxin is injected causing leaves to twist and curl, sometimes killing new shoots. Nymphs also produce excess sap or honeydew which promotes the growth of sooty mold. To direct the honeydew away from their bodies, they produce waxy, white tubules. The tubules are unique to the nymphs and are easily identified. Other insects such as aphids can cause these same symptoms, but they do not produce tubules nor are they a vector for the bacterium causing HLB. Irregular blotchy and yellowing of leaves by ANR
Symptoms of HLB Disease. Early symptoms of HLB cause the leaves to yellow on a particular limb or section of the tree. The yellowing appears asymmetrical and blotchy or mottled. (Although nitrogen or zinc deficiencies can also cause yellowing, they follow a symmetrical yellowing pattern). Over time, fruit on an HLB-infected tree becomes smaller and juice becomes bitter. The citrus fruit itself may stay partially green, which is why HLB was first called “citrus greening disease.” Fruit may also appear misshapen. The foliage becomes sparser with twig and limb dieback, and the tree eventually dies. Even though infected, symptoms may be undetected for a few years, allowing ACP to spread the disease unless the insect is controlled.

Now that the ACP is firmly established in California, the Department of Food and Agriculture (CDFA) is tracking its distribution through the use of yellow sticky traps in commercial and residential areas. ACP quarantine zones are being used to restrict the transport of citrus trees and the spread of the psyllid. Biological controls using predators and parasites that feed on the ACP are being used to help control (but not eradicate) the ACP.

The University of California Division of Agricultural and Natural Resources has an updated map on the spread of the ACP and HLB you can find at https://tinyurl.com/y4lchxk7. A California regulation and quarantine boundary map can be found at http://tinyurl.com/y3ftxzzu.

How you can help. Monitoring citrus for the presence of the ACP and symptoms of HLB is key for controlling this fatal disease. Inspect your citrus any time there is a flush of newly developing leaves; especially in springtime (now), and later on the fall flush. Like aphids, psyllids feed on new, developing leaves. Look for evidence of the ACP in new growth by checking for: Citrus leaves distorted and malformed by psyllid feeding by ANR
If possible, use a magnifying hand lens or take a photo and then enlarge it to help identify the tiny eggs, nymphs and psyllids. Yellow sticky traps for monitoring the presence of psyllids can also be purchased.

Control ants that like to “farm” the psyllid honeydew to feed their young. Ants will protect the psyllids from their natural enemies such as parasites and other predators. Only purchase citrus trees from reputable sources and DO NOT transport citrus trees, fruit, or cuttings from areas known to harbor the psyllid.

If you suspect the presence of the ACP or any evidence of HLB disease, immediately contact the Butte County Agricultural Commissioner's Office (530-538-7381), or the CDFA Citrus Threat hotline (800-491-1899).

Sources for more information include:

The UC IPM Publication for ACP and HLB Disease at http://tinyurl.com/yy6jtgy9

California Department of Food and Agriculture at https://www.cdfa.ca.gov/plant/acp/

All photos are from the University of California Division of Agriculture and Natural Resources (ANR). 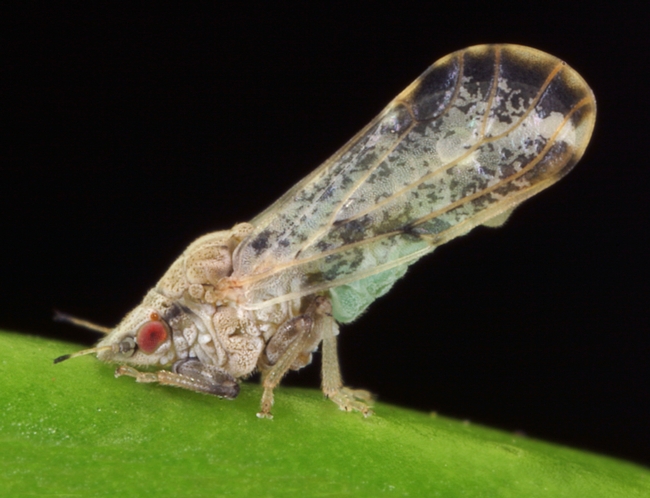 ACP adult feeding with back end in the air by ANR 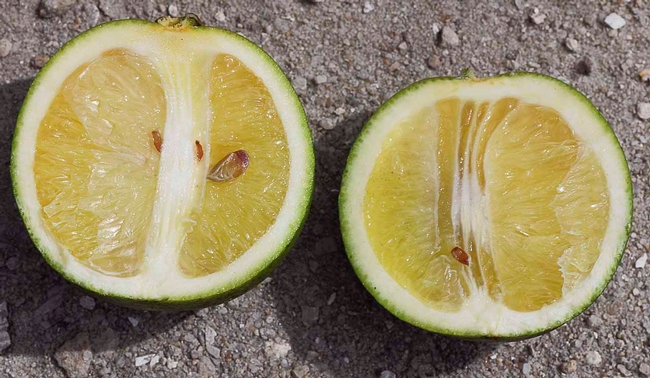 Fruits is small, hard and misshapen. Such symptoms may not show up for a year or more, ANR 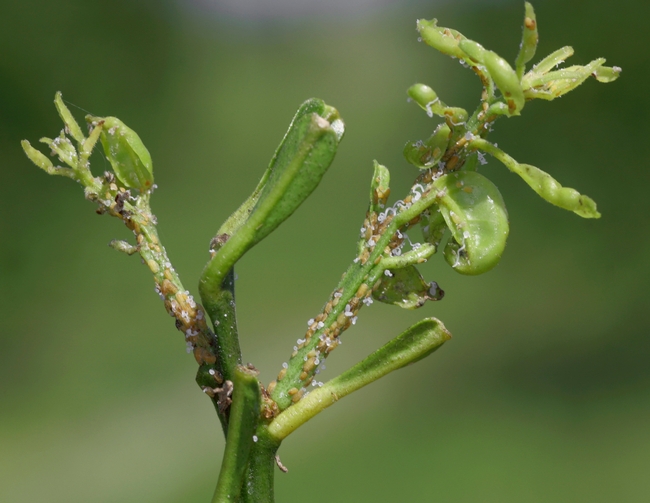 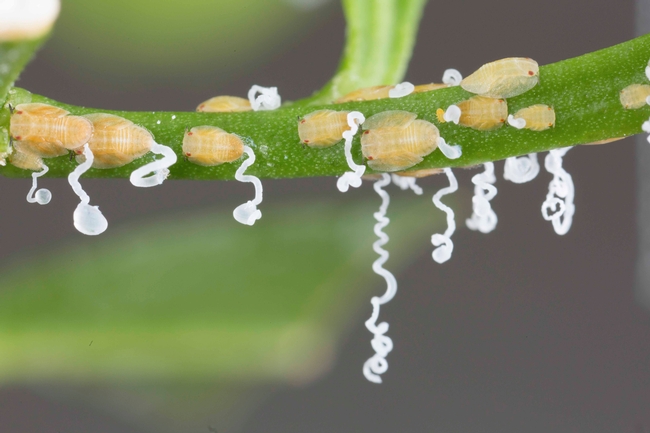