Doctoral candidate Charlotte Herbert Alberts of the Bohart Museum of Entomology, UC Davis Department of Entomology and Nematology, with an Asilidae.
Quick, do you know what today is?

Question is, how are you celebrating it?

April 30 is both a momentous and delightful occasion for Charlotte Herbert Alberts, who studies robber flies. A fourth-year doctoral candidate in entomology at the University of California, Davis, she works with major professor Lynn Kimsey, director of the Bohart Museum of Entomology, part of the UC Davis Department of Entomology and Nematology.

The working title of her thesis? "Phylogeny, Diversification, and Evolution of Asiloidea (Diptera: Brachycera)."

These flies fascinate her. And she's elated that they have their special day. Here's why:

"A day celebrating a family of flies can seem silly to some, but to me, they are my passion and my way of protecting the world I love," Charlotte says. "I work every day to learn more about this family and other related families with describing new species, figuring out their evolutionary relationships, and observing what insects they eat and why. I hope that if we take a moment and celebrate the little things like assassin flies, more people will find their niche in helping save this beautiful planet we depend on to live."

What are robber flies?

Robber flies, also known as assassin flies (Diptera: Asilidae) are predatory and venomous flies. "Despite being the third most speciose family of flies with more than 7,500 species found worldwide, and still many more being discovered; this family is still relatively unknown by the general public," Charlotte points out. "When I mention that I study flies and bring up assassin flies, most of the time people have no idea what they are or have never heard/seen of them. This anonymity is probably due to a variety of reasons. Many people call them assassin flies because of their tendency to look like other insects. In particular, wasps or bumble bees. They are also territorial, so you will only ever find one or two individuals in a given area. It can take a while to find your first robber fly, but once you do, you will start to see them all over the place!

How can you find an assassin fly?

"Go into the woods and look for sunny spots with areas for the flies to perch on," Charlotte says. "They mostly perch on the flat surface of a leaf in the sun, or at the very tip of a pointy twig. From their perch, they can hunt for insect prey in flight. Once they spot prey, the assassin fly quickly intercepts it in flight and immediately pierces it with its hypodermic needle-like mouthparts to inject a paralytic neurotoxin to subdue it. Pre-digestive enzymes are also inserted to reduce the innards into a smoothie-like concoction, which the assassin fly feeds on through the needle-like hypopharynx."

"Despite being venomous and highly voracious predators, assassin flies are no danger to us! I  caught my first assassin fly in the palm of my hand! Because they are top predators in their world, they are not very fearful of people. I routinely have had them perch on me to hunt prey. But be careful, some of the larger assassin flies can pierce the skin with a defensive bite if they are aggravated enough. Their bites have been compared to a honey bee sting."

Why should you care about assassin flies?

"All insects play essential ecosystem roles that directly or indirectly affect our daily lives, whether through pollination, population control of pests, decomposition, product production, and more," says Charlotte, who is also a talented artist who sketches robber flies and other insects, and creates T-shirts for the Bohart Museum. "Insects, and especially flies, face a stigma that is difficult to overcome. Assassin flies are a fantastic, charismatic example of a family of flies that are generally unknown by the public and yet is one of the most speciose and helpful in pest population control. I have regularly played with the idea of keeping a couple as house pets to control the other unwanted flying insects that make it into our house." Her husband, George, probably wouldn't mind at all. He shares her interest in insects.

Meanwhile, scientists are troubled about the worldwide declining population of insects, tabbed "Insect Apocalypse." While some folks are debating its validity, "what is undeniably true is that we are destroying the habitat of poorly researched areas, and in turn bringing on the extinction of species that we have not given names, or even seen," Charlotte says. "Extinction is a terrifying reality because each species plays a vital part in keeping the ecosystem balanced and healthy. Without them, ecosystems collapse, and we will feel the ramifications whether it's immediately or a few years later."

"When I was around 5 years old, my Mom read Charlotte's Web to me. Having the same name as Charlotte gave me a strong connection to the spider. I couldn't understand why people hated spiders and insects so much. I grew up on a farm in New Hampshire and constantly collected spiders and insects I found around the property. When handled gently and with love, they never bit or hurt me so I saw no reason to be scared of them. To the best of my understanding, they were just misunderstood. I distinctly remember a couple of times where either my family members or teachers saw me rescue a fly, and questioned my actions. Sometimes I would be made fun of, or told not to worry about them, that they were only going to die anyway...but it broke my heart that no one cared, and sometimes people would go out of their way to kill flies, spiders, or other arthropods that were not hurting them in any way."

"So, even though my interest in insects alienated me a little from my peers, it felt important to me stand up for them. In fifth grade, I proudly stood up at graduation and told everyone I was going to be an arachnologist when I grew up! The more I read about spiders and insects the more my passion grew. However, in middle school, peer impressions started to push me toward a more conventional career."

In college, Charlotte rediscovered her passion for insects. She assisted with a couple of native bee projects.  "After starting an entomology-based research project for a class, my advisor saw my passion, very apparent, and wanted to add fuel to that passion. He was the person who introduced me to assassin flies! After a summer working on a research fellowship studying them in northern New York, I was sold! The rest is pretty much history."

History...and history in the making! Even on Twitter! Check out the hashtag, #WorldRobberFlyDay.

Because it is! Happy World Robber Fly Day! 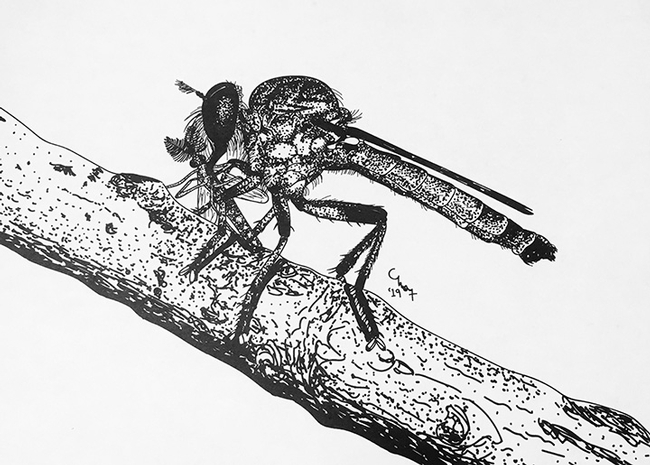 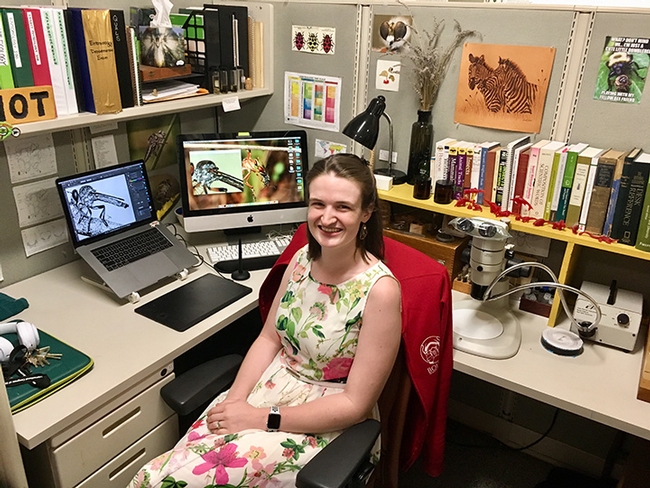 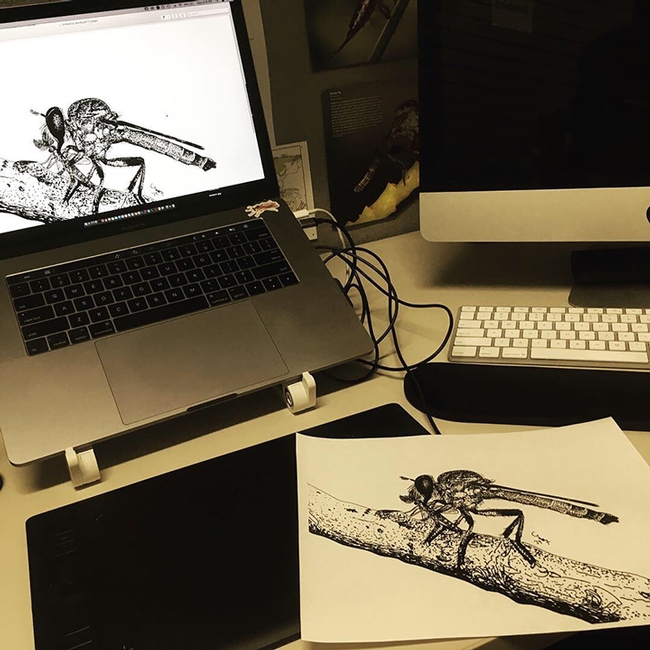 It's all about robber flies in the habitat of Charlotte Herbert Alberts.
Focus Areas:
Focus Area Tags: Environment, Innovation, Natural Resources
Tags: Bohart Museum of Entomology (435), Charlotte Herbert Alberts (8), robber flies (1), UC Davis Department of Entomology and Nematology (444), World Robber Fly Day (1)
Comments: 6
Comments:
by Saif Ullah
on April 30, 2019 at 10:38 PM
It was a wonderful and so informative article to read. Great effort by Charlotte. This family is really fascinating, and I can hope it will be even more interesting to study this family.
by Lee Miller
on May 1, 2019 at 8:39 AM
I love the picture with the fly on the nose. Good humor to start my day and a very good story about the motivation of Charlotte.
by Kathy Keatley Garvey
on May 1, 2019 at 9:26 AM
Thanks! Charlotte Alberts will love this comment.
by Peter
on July 19, 2019 at 6:35 PM
I think the robber fly is the coolest insect. I first saw one a few years ago; it landed on me with another fly it was consuming. I have the pic and would love to share it. These flies are so docile, and when they land on you, it's quite gentle and not annoying at all. I've got one in my window right now that I don't know what to do with. They should be celebrated for their uniqueness.
by Jim Eldet
on July 10, 2020 at 8:45 AM
I love your enthusiasm about insects. The older I get the more appreciation I have for theses wonderful
creatures. I studied Leeches in Grad school but since retirement I have a new interest in insects.
Keep up the good work and I am putting World Robber Fly Day on my calendar. Jim 🐞🦟🦗🕷
by Cosmichotpants
on August 10, 2020 at 1:18 PM
Just saw one in my backyard for the first time. Thought it was a wasp! With some searching I found this article, very interesting and informative, thanks!
Leave a Reply: