Weeds are one of the biggest challenges to organic vegetable production and can be expensive to manage since herbicides are not an option.

Though sub-surface drip irrigation is the most common method of irrigation in processing tomatoes in California, furrow irrigation is still used by some producers in Sutter County, particularly organic growers. Buried drip irrigation allows for dry bed tops which helps prevent weed germination among other benefits. Furrow irrigation is common among organic producers in Sutter County because it allows for more flexibility with crop rotation and tillage. Alternate furrows are irrigated to keep bed tops from getting too wet but still provide sufficient moisture to tomatoes. Irrigation is generally not needed immediately after tomatoes are transplanted due to adequate moisture from spring rains, but sprinkler irrigation is sometimes used for seedlings before switching to furrow irrigation. Organic and furrow-irrigated tomatoes are generally planted in single row to facilitate mechanical cultivation.

Mechanical cultivation is used when tomatoes are small to control weeds in the beds and seedline. The closer a cultivator can get to the seedline, the better, because it will likely reduce the need for hand weeding.

There are many different types of cultivators, two of which are the double disc opener and the finger weeder. I am currently working on a trial comparing the two for weed control efficacy in an organic tomato field. The double disc opener is a common standard cultivator, while the finger weeder is newer and gaining in popularity because it can reach the seed line to remove weeds. To measure weed control, I am taking percent cover measurements pre- and post-cultivation in random 1m2 quadrats within plots where the double disc opener was used or where the finger weeder was used. I am measuring bare soil, tomato plants, residue (from the vetch cover crop), broadleaf weeds, grass weeds, and volunteer vetch. Examples from early May, late May, and mid-June can be seen below. Once the tomatoes are too big for mechanical cultivation, hand weeding crews are relied upon for weed control in organic production. 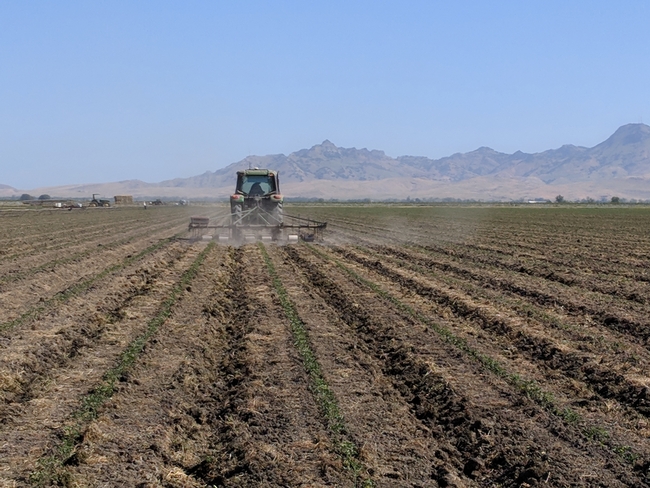