When I first inherited this pear tree it was hemmed in between two structures and restricted to a 3-foot diameter opening in the concrete.  I had noticed that several of the branches growing straight up were blacken and appeared dead.  I assumed that the recent drought had caused the problem. No problem I said to myself. I repeated the dead, dying or diseased tree mantra and remove the branches. I cut the branches and thought problem solved and that was that.   Since then, one of the buildings has been removed as well as all the concrete. The tree has done better and produced a number of pears.  When it was hemmed in it only had a few inedible pears.

Later that year Sally Thompson a classmate in my Master Gardeners Class said what are you going to do with that fire blight on your pear tree.   She continued, “I know what fire blight looks like I have it on several ornamental pears growing next to my house.”  Really fire blight?  I realized that she was right after all she's a Master Gardener. I did a little research and confirmed her diagnosis. It was more than just dealing with dead wood but a serious disease that could be transmitted throughout the entire tree, maybe killing it and even spread to my newly acquire apple trees.

Fire blight is named because of the appearance of the limbs, leaves and fruit look like they got hit and blacken with a blow torch. It's caused by a bacterium, Erwinia amylovora, and there is no cure for it, but control and prevention are possible.

At the outset choosing the right tree is Important. According to the UC IPM article on Fire Blight, certain varieties are susceptible: Asian Pear (except Shinko) and red pear varieties are just a few. An ornamental pear tree to avoid is the Aristocrat. Fire blight can also infect other pome fruit trees such as several apple varieties: Fuji, Gaia, Golden Delicious. Granny Smith, Jonathan, Mutsu, Pink Lady, and Yellow Newton are more susceptible than other apple varieties. The disease starts in the flowers so trees that bloom late in the spring or throughout the seasons can have severe fire blight damage. In my case, however, I had to deal with the tree I inherited or cut it down entirely.

Even though I pruned the damaged limbs from the tree, it was still infected. E.amylovaora winters over in cankers and in twigs and branches and even the trunk of diseased trees. You have to wait for the symptoms of the disease to appear before you can do preventive maintenance. I had removed several infected limbs last year using a 10% bleach solution between the cuts.  You should cut at least -12” below the infected area. Check for discoloration at the cut, the inside of the cut should show clean heartwood with a definite dark layer of bark. Just below the bark, there is a layer of cambium. This is living tissue of the tree and where E. amylovora invades. The cambium should be distinct and be uniform all around if there is some discoloration and or irregular growth in one area you may have to cut further back.

But this summer I noticed more infected twigs and branches with the disease.  I got out my pruning shears dipped them in bleach and disposed of the twigs branches and leaves into the Green Recycling bin.  Never put the infected tree parts in the compost, you'll just spread it around even more effectively than the wind or rain could ever do. The best time to prune the tree is after the spring growth and when there is less moisture in the air.  Summer or late Fall would be the best times for pruning.

Over-fertilization is another no-no.  The bacterium takes advantage of new growth from the additional nitrogen in the soil and spreads rapidly.

Weather is an important factor in the spread of fire blight temperatures between 75 – 85 F daytime with 55 F at night accompanied by rain are ideal conditions for disease spread.  If those conditions exist, be on the lookout for signs of infestation. The disease spreads from the flowers to the shoots invading the cambium a thin layer just below the bark.

I probably will be fighting fire blight on my pear tree as long as it lives.  It has survived many years with the disease so it probably won't die soon.  Without management, the situation may become worse.  My other concern is keeping the disease in check because I don't want it to spread to the new pome apple trees I have planted.  Because the disease is not systematic on my tree, I am just pruning as needed and disposing of the infected limbs and leaves in the green waste. Hopefully and this will work and I will have several years of fruitful rewards.

There are chemical (liquid copper) and biological management (organic sprays) tools available.   Check with the UC IPM (Integrated Pest Management) Program for the latest and safe use of pest control products for fire blight. 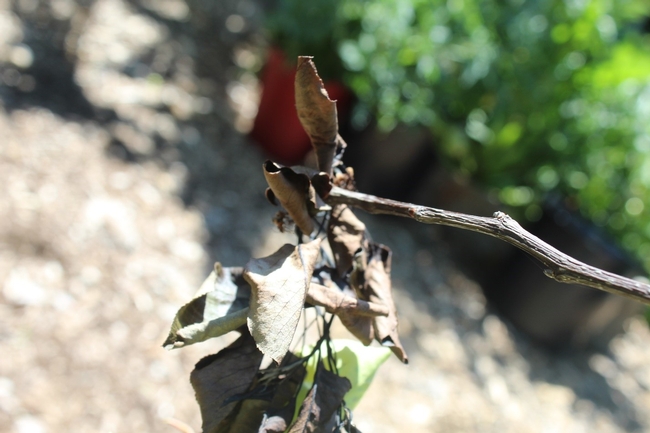 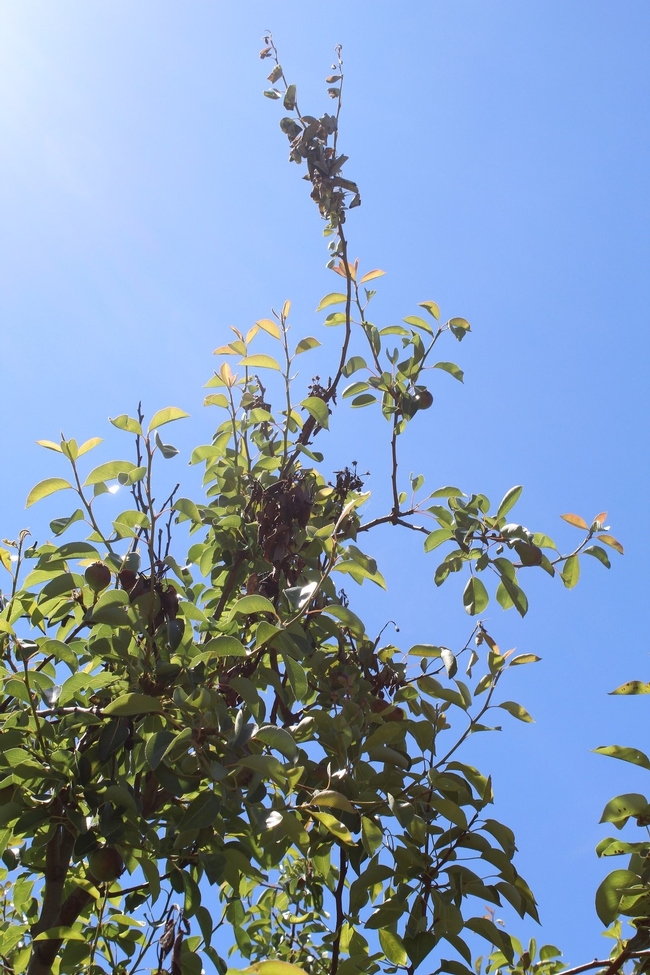 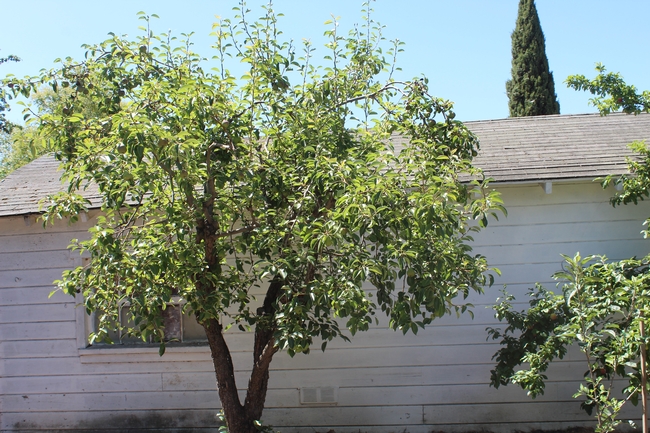 Comments: 3
Comments:
by Ron Acquistapace
on July 13, 2019 at 11:49 AM
I found your article very interesting. I have lost one pear tree and one Asian pear. I have spent hours try to save the trees doing the same practice you are doing. I have given up and removed the trees. Your advise to get more resistant trees is helpful. An arborist mentioned that fire blight can also be spread by bees. I have hives on my property so this may be true.
by Vicki Hopkins
on July 13, 2019 at 3:51 PM
I was told by a Master Gardener NOT to put the diseased cut branches in the recycle green tote? I threw them away in the regular grey tote. Could you confirm my understanding of which tote is appropriate, please? Thank you.
by Jennifer Baumbach
on July 19, 2019 at 10:36 AM
The diseased branches and leaves should be put into the grey toter. They are garbage and you do not want to compost them.

Bees do spread fireblight when they visit the flowers. So it's transmitted from flower to flower. See this link for more information: http://ipm.ucanr.edu/PMG/PESTNOTES/pn7414.html
Leave a Reply: