The Ground Cover "You Can Step on It"

Published on: September 12, 2019
Looking for a groundcover that's dense and durable? A groundcover that lies flat, hugging the soil? A groundcover that performs like a rug you can walk on? Consider Dymondia margaretae, also known as Silver Carpet.
This plant's foliage is unique and attractive with narrow leaves in a color combination of bluish-gray and green. Leaves are hairless on top, curling up on the edges to reveal a silvery-white fuzzy underside giving Dymondia a variegated appearance. From spring to summer, little daisy-like yellow flowers randomly bloom.
Curious about this charmer, I spent a couple of hours following rabbit tracks trying to unearth substantive information about the Dymondia only to discover little available about this intriguing evergreen perennial. One thing for sure, this groundcover is considered endangered, risking extinction in its native habitat since it is known to exist in the wild at only five locations worldwide.
According to San Marcos Growers in Southern California, Dymondia was introduced to them in 1985 by John Bleck, who was the manager of UC-Santa Barbara Biology Greenhouses at the time. The plant bears the name of Miss Margaret E. Dryden-Dymond, the horticulturist who first discovered it beside a road along the western Cape of South Africa in the Bredasdorp District. During this 1933 expedition for the Kirstenbosch National Botanical Garden, she collected the first plant to document and study.

Today, Silver Carpet is a popular well-known landscape favorite —, especially in California. Showcased in coastal gardens, used as a border for walkways, a filler between pavers and a soil retainer on slopes, this plant thrives in full sun with little water once established. While Dymondia tolerates both heat and light frost, temperatures below 28∘ F can be fatal.

This “you can step on it” groundcover spreads by offsets from a multi-branched rhizome. Initially, growth is slow and some watering is necessary, which eventually can be reduced to a once-a-week deep soak. As with succulent propagation, this plant propagates by cuttings during its late winter-early spring growing season.
Dymondia prefers well-drained soil. But unfortunately, gophers prefer Dymondia to grass. So if you replace your lawn with this groundcover, keep your eye open for these critters with an appetite for tender roots.
For further information about the low water use of Dymondia, visit:
https://inlandvalleygardenplanner.org/plants/dymondia-margaretae/ 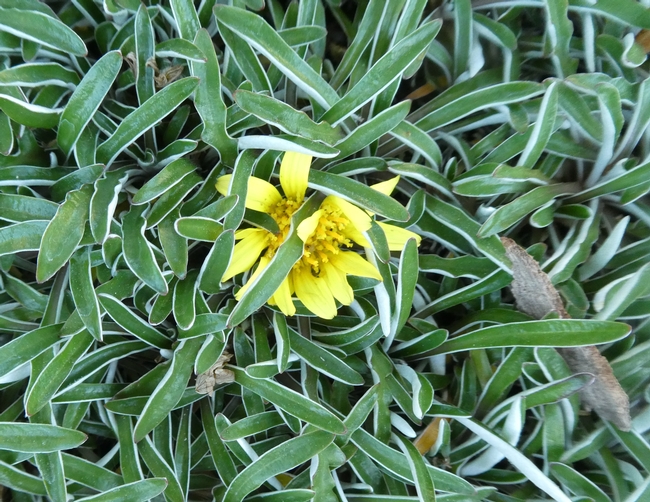 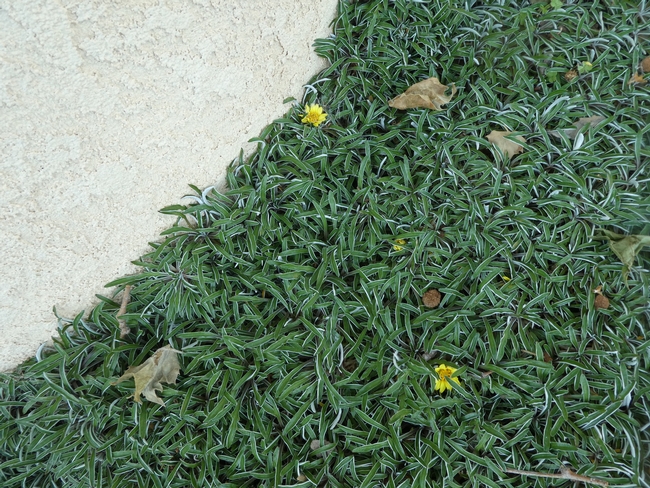 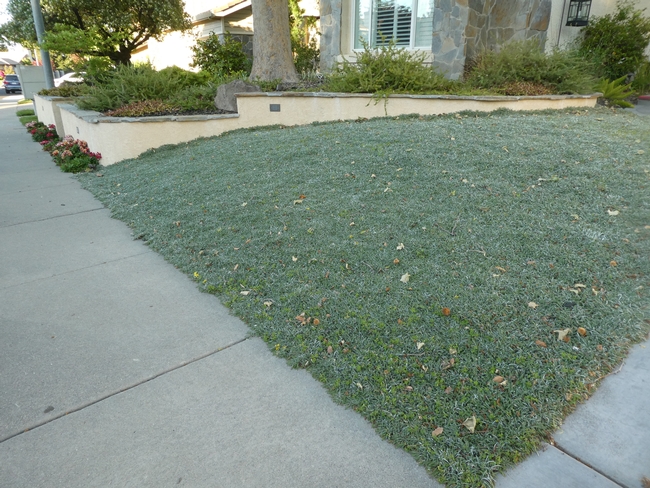 Comments: 4
Comments:
by Jenni Dodini
on September 16, 2019 at 10:59 AM
Thanks for the research on this plant. I was considering putting in groundcover, but feeding the gophers and moles is on my "NO WAY" list. While I would enjoy the beauty and durability, I would definitely curse the underground creatures!
by Brian D Moore
on April 23, 2021 at 11:48 AM
Thanks, I plan to mention your suggestions for Dymondia margaretae in an ground cover article for Mariposa's UC Master Gardeners. I will give you credits for your research.
by Tania Castillo
on September 6, 2021 at 1:50 PM
How long does dymondia stay attractive? I was researching ruschia nana (carpet of stars) for a lawn alternative. It looks great for the first 3-4 years and then can turn woody and ugly. Will dymondia continue to look great as long as it’s well taken care of or will it start looking old and dead after a few years? I want to invest in a groundcover that lasts for many years.
Can I cover dymondia with something like landscape fabric during the 100+ degree days in Southern California or will it die back from pure heat under a dark fabric?
Thank you for compiling all the information!
by Bob Aasen
on September 18, 2022 at 12:23 AM
Hi, how long does it take to grow in an area roughly 20x20. As far as the gophers go are you able to use just regular gopher repellent or put like a wire mesh down and then plant on top of that to help. I have to German Shepherd dogs that like to run around. How long will this product last I live in California Northern area. Thank you for your help
Leave a Reply: