Fire Readiness in the Grove
Published on: August 6, 2019

This is a reposting of a blog from 2015 that is still pertinent today.

Defensible space is needed to slow the spread of a wildfire and improves the safety of firefighters defending properties. Defensible space reduces the fire risk and creates space that firefighters can use as a tool to work safely and suppress a wildfire and to defend a structure or other property in the event of a wildfire.  Fuel modification/reduction projects include defensible space around structures, fuelbreaks along roads and groves, ridge tops, or around property lines and other fire fuel reduction activities that lessen the risk of wildfires to communities.  Fuel reduction projects usually remove cut vegetation from the site either through burning or haul-away methods.  Fuel modification projects usually leave the cut vegetation on site in the form of wood chips or scattered material.  These types of projects break up the lateral and horizontal vegetative continuity which reduced rates of fire spread, fire intensity, and flame heights which increase firefighter's chances of suppressing fires.

Prunings piled in draws within or around the groves can also be particularly damaging because they are dried vegetation which pose an increased fire danger due to the fact that piles of vegetation can easily ignite and smolder for a long time creating a challenge to firefighters.  Vegetation that is piled in draws or other waterways can also obstruct water flow during rain events which could lead to erosion and flooding.

How to Keep our Growers and Groves Safe

1. Remove all combustible material from around the trunks of the trees for a distance of two to three feet.

2. Prune off low-lying limbs, those that are low enough to accumulate more than the normal inch or so of leaf mulch.

3. Remove from the orchard all broken limbs, deadwood and other combustible debris.

4. Clear brush, trees and other heavy vegetation away from edge of orchard for a distance of at least 50 feet.

5. Do not pile brush or other combustible material in draws or canyons, or around the edges of groves.

6. Apply sprinkler water for as long a period in advance of the fire as possible so as to have everything wet.  Water during the fire would obviously be desirable but often is lacking because of lack of pressure or speed of the movement of the fire.

7. Use steel pipe and risers for above ground sprinkler systems.

It is nearly impossible to determine the extent of damage to the wood of the tree immediately after the fire.  The most critical part of the tree is the main trunk.  The bark from just above the ground to about two feet high can become hot enough to kill the cambium, the growth layer between the bark and wood.  When the cambium is killed, the tree is girdled and will die (Goodall 1965). Suckers will eventually grow from below the graft union of these trees; these suckers can then be grafted to an appropriate variety.  However, many trees in the grove may still be alive internally because there was a quick burn through the grove, or the leaves merely died from heat generated by burning surrounding trees, vegetation and mulch (Bender 2012).

According to Bender (2012), fire damaged trees that have leaves that are completely brown do not use water, but there may be trees that have escaped the fire in the irrigation block and these need to be irrigated as soon as possible.  The first thing to do is to repair the irrigation system.  Risers, sprinklers, pressure regulators and poly-hose on the ground are probably melted and should be replaced as soon as possible.  PVC pipe that is buried underground is usually fine, depending on its depth and fire intensity.  If part of the trees in the irrigation block are alive and partly damaged, it would probably be best to roll out poly-hose onto the damaged trees and set up a separate irrigation block.  As the trees recover and start using water, you can eventually go back to the permanent system.

Trees that are heavily damaged do not use as much water (therefore transpiration is reduced significantly), but their feeder roots need to be watered and short irrigations should occur to replace water evaporating off of the soil surface.  Start with a one hour irrigation and monitor the soil closely, irrigating too heavily could lead to the onset of root rot.  Do not irrigate damaged trees on its original schedule; a ten hour irrigation will not “force” the trees to grow back sooner, and roots could be easily damaged by lack of oxygen in the lower soil profiles due to water accumulating and the soil becoming saturated.

Every fire is different, so experiences vary. It may take several months to be able to observe whether the bark is killed all the way to the cambium or not.  Thus, we recommend against pruning until new growth appears to indicate where the wood is alive.  According to Bender (2012), an alternative method which is rather unique to the avocado industry, the burned trees can all be stumped immediately and allowed to re-grow.  “Stumping” is a normal practice in the industry when avocado trees have reached such heights that fruit is high off the ground and picking becomes difficult.  In many of the groves that were burned, stumping was probably needed anyway; therefore after a burn stumping would be a reasonable alternative for many growers.

Fire damaged trees should be whitewashed on the south side of the limbs.  Goodall (1965) also suggests to save expenses, fertilizer and pest control can be postponed for a year or so.

According to Bender (2012), if the goal of the grower is to bring trees back into production as soon as possible, the avocado tree will usually recover production faster if the grower is patient and prunes only the dead wood three months after the fire.  Unfortunately, this practice creates a permanent problem in the grove as far as irrigation scheduling and application.  Mixing full-grown trees (untouched by the fire) with partially pruned trees (and stumped trees) in an irrigation block means that some trees will be over-watered, or under-watered, depending on their size.  Adjustments can be made in the sprinkler sizes, but generally this is an undesirable cultural practice due to every tree needing a different rate of irrigation and can this can also add to labor and equipment costs.

If the goal is to reduce the size of all trees in the irrigation block to a manageable size, then stumping the block immediately after the fire is the best solution.  Trees will be out of production for two years and have about 50% production in the third year, and some re-grafting may have to be done, but fertilizing and watering properly is manageable.

A third option could be to scaffold all trees in an irrigation block to 12' in height.  This would get rid of a lot of dead wood immediately, and might allow the trees to come back in production faster than the stumping the trees.

Record-low rainfall, extreme heat and a statewide drought has caused a significant increase in wildfires and a need for Californians to participate in fire-prevention tactics, including growers.  According to CAL FIRE, in order to prevent wildfires and property damage, homeowners are asked to maintain “defensible space” around their house and groves year round and not use powered equipment outdoors when it's hot, dry or windy. Wildfire prevention such as defensible space, keeping properties cleared of dried vegetation, and public education is the best long term solution.

Photo 1: An inmate firefighter crew battles a fire in an avocado grove outside Fallbrook, California, May 14, 2014. Photo: Sandy Huffaker 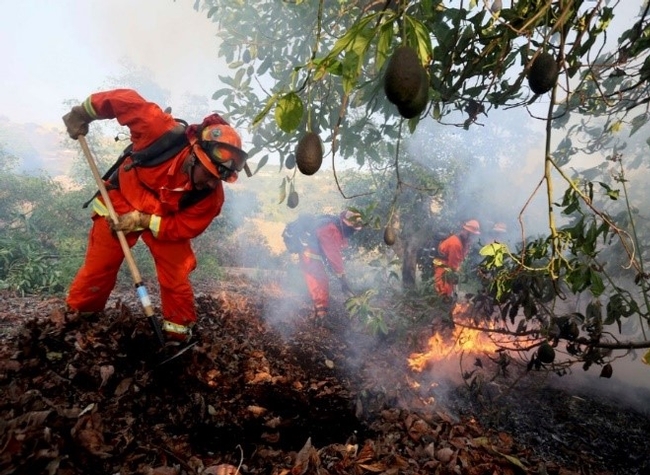 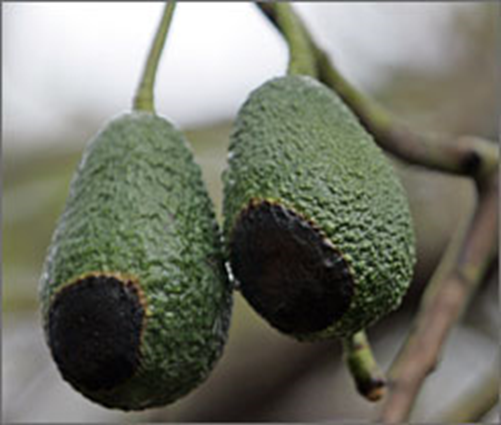 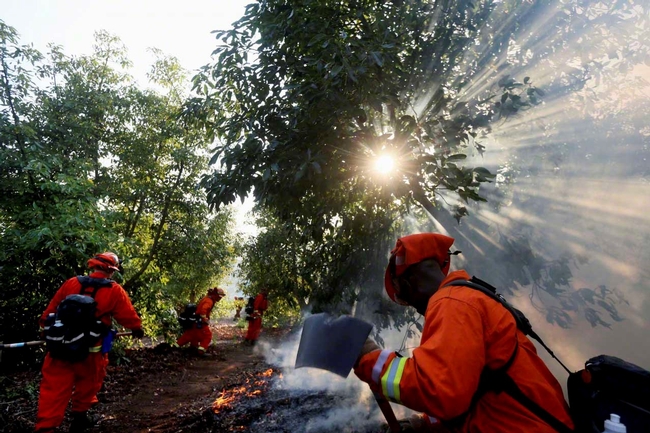 And a P.S. from the past
Phire, Phlood, Phreeze and Fytophthora
Published on: December 21, 2016

Leaves are great for erosion control, for nutrient cycling and disease control, but if they mean increasing potential for fire spread, it's a good idea to remove a little of it.  Ed has found that a backpack blower can rapidly remove leaves from around the base of trees and create a narrow fire break that can reduce fire damage to trees.  He now clears a 6-8' diameter pattern around the trunk. 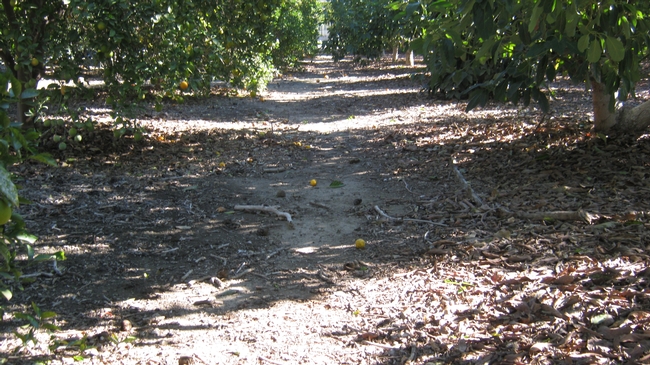 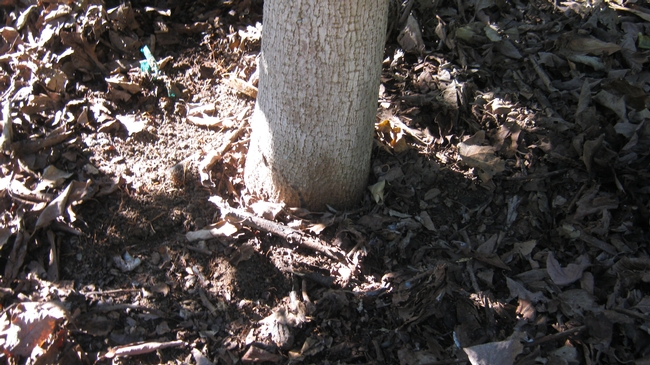