Introduction: An interesting phenomenon that I've been called out to a number of strawberry ranches starting about five years ago has been the appearance of aborted flowers, also known by growers as duds, in noticeable numbers right around and after the longest day of summer - June 21, the equinox.  As shown in Figures 1 and 2 below, the duds would present themselves as browned out centers of the flowers with no fruit forming subsequently.

With the idea that these duds may be caused by an excess exposure to ultraviolet (UV) radiation brought about by the longer days, I worked with a Salinas grower in 2018 and 2019 to apply a protective layer with a liquid surfactant called Shadow, (a lignin material designed specifically to reduce sunlight reaching the plant) over the plant and flower in an attempt to reduce this problem.

Strawberry variety was proprietary, and known to be very susceptible to producing a large number of duds.

In both years, statistical differences of dud number and fruit size were tested by the TTEST function on Microsoft Excel by date at the 95 % level of confidence.

Shadow significantly reduced the number of duds in 2018 (see Table 1 below).  Fruit size was apparently not affected, with no significant differences in average size recorded between the treated and untreated in either 2018 or 2019.

Table 1: Number of duds (aborted flowers) per 3 minutes of searching with 2 people.

* Significantly different at the 95% level of confidence.

It is interesting to note that in both years the number of duds in the plots treated with Shadow were lower (significantly so in 2018 and close to significantly lower (p=0.07) on July 4, 2019), only after the longest day of the equinox had passed, which does indicate some activity in minimizing flower abortion in strawberry associated with lengthy exposure to solar radiation on the part of this material. 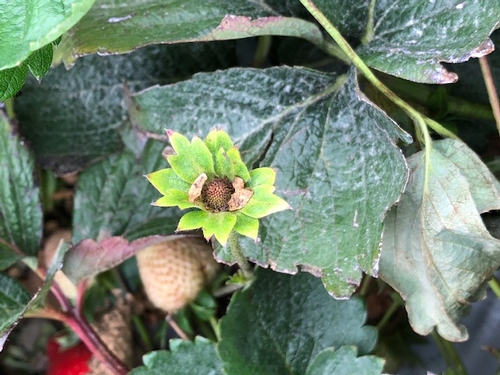 Figure 1: Close up of strawberry flower dud. Note brown color which indicates the fruit will not make. 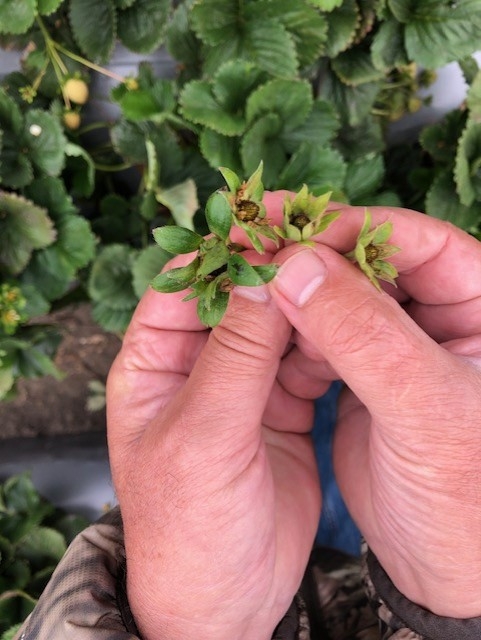