Scientists at UC Riverside plan to quarantine goldspotted oak borers and raise them with parasitic insects from Arizona and Mexico in an effort to find an insect that will reduce the oak-killing pest's population in Southern California, according to a San Diego Union Tribune blog.

Writer Lily Leung spoke to UC Cooperative Extension horticulture advisor Vince Lazaneo about the threat the imported pest poses to San Diego area oak trees. Eradication of the goldspotted oak borer beetle, he told her, "will take nothing short of a miracle." The challenge for scientists is trapping the beetle, which is the size of a rice grain and tough for even veteran researchers to find.

GSOB, a native of Arizona and Mexico, was first identified in California in 2004. It has already killed 20,000 trees and is contributing to on-going oak tree mortality on federal, state, private and Native American lands in rural and suburban San Diego County. 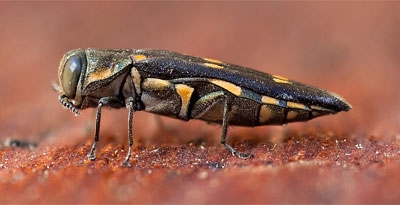