Nicole Tam's creative party invitation: A three-headed wasp. (Photo by Kathy Keatley Garvey)
Scary critters with mandibles and lovable insects with antennae gathered at the Halloween party at the Bohart Museum of Entomology, UC Davi, hosted by the Friends of the Bohart.

There was the bee family: the queen bee, the drone and the worker bee. That would be entomologist Leslie Saul-Gershenz and biologist Norman Gershenz, the husband-wife team behind SaveNature.Org, a non-profit Bay Area-based organization devoted to insects.

Leslie, who holds a doctorate in entomology from UC Davis, is the associate director of research, Wild Energy Initiative, John Muir Institute of the Environment at UC Davis. The worker bee? That would be their service dog. The "worker" bee, however,spent most of her time sleeping beneath a table while the queen bee and drone mingled in the hive of activity around them.

One of the highlights was a parasitoid pinata crafted by doctoral student Charlotte Herbert Alberts and husband, insect enthusiast George Alberts. They drew inspiration from the party invitation of artist and entomology alumnus Nicole Tam.

Of her art, Tam said: "All good things come in groups of three like the heads of Kerberos. Also, I just really wanted to draw a three-headed wasp! The wasps I used for this art piece were from the genera Polistes, Synoeca, and Dolichovespula." An insect-themed pumpkin at the Bohart Museum of Entomology. (Photo by Kathy Keatley Garvey)
And the piñata? Charlotte and George interpreted their work as "a parasitoid of dragon eggs. Probably led to the extinction of dragons. We used paper mache, chicken wire for extra defense, wire for molding and lots of paint."

The Bohart Museum, located in Room 1124 of the Academic Surge Building on Crocker Lane, houses a global collection of nearly eight million specimens. It is also the home of the seventh largest insect collection in North America, and the California Insect Survey, a storehouse of the insect biodiversity. In addition, it maintains a live "petting zoo," featuring Madagascar hissing cockroaches, walking sticks or stick insects, tarantulas; and a year-around gift shop stocked with T-shirts, sweatshirts, books, jewelry, posters, insect-collecting equipment and insect-themed candy.

The museum is open to the public Mondays through Thursdays from 9 a.m. to noon and 1 to 5 p.m., except on holidays. More information on the Bohart Museum is available on the website at http://bohart.ucdavis.edu or by contacting (530) 752-0493 or bmuseum@ucdavis.edu. 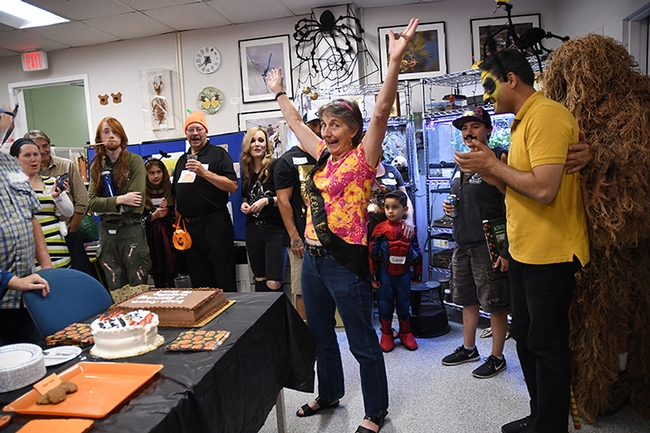 Lynn Kimsey, director of the Bohart Museum of Entomology, welcomes the crowd to the Halloween party. (Photo by Kathy Keatley Garvey) 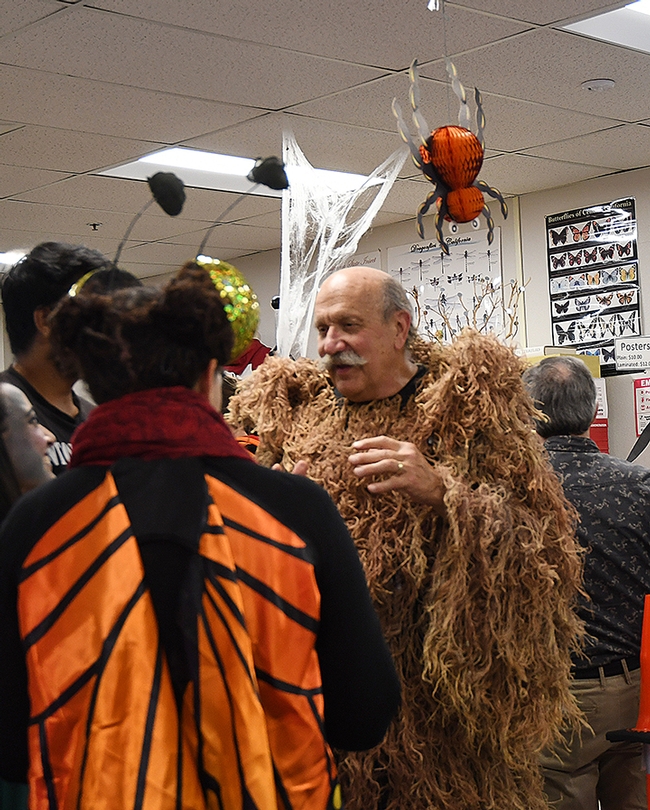 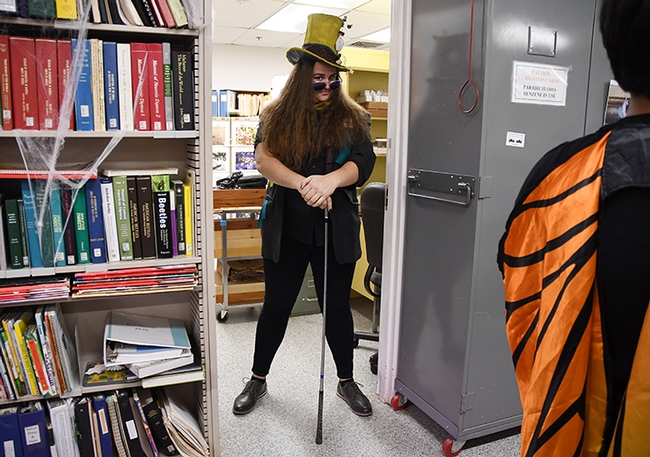 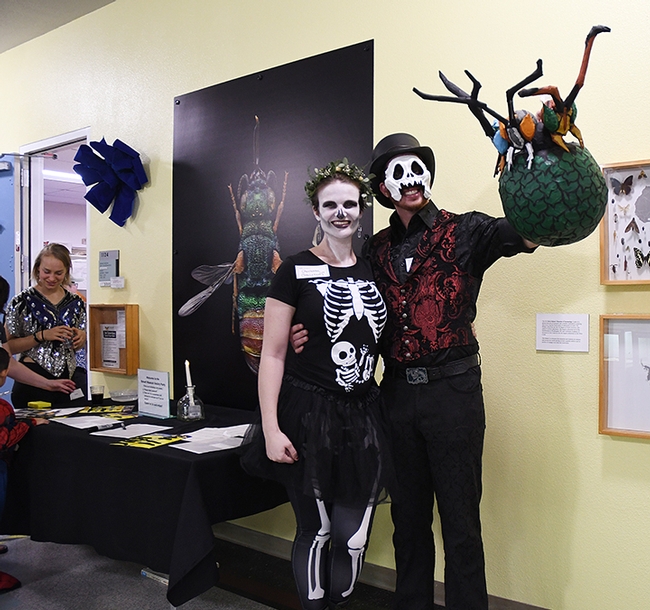 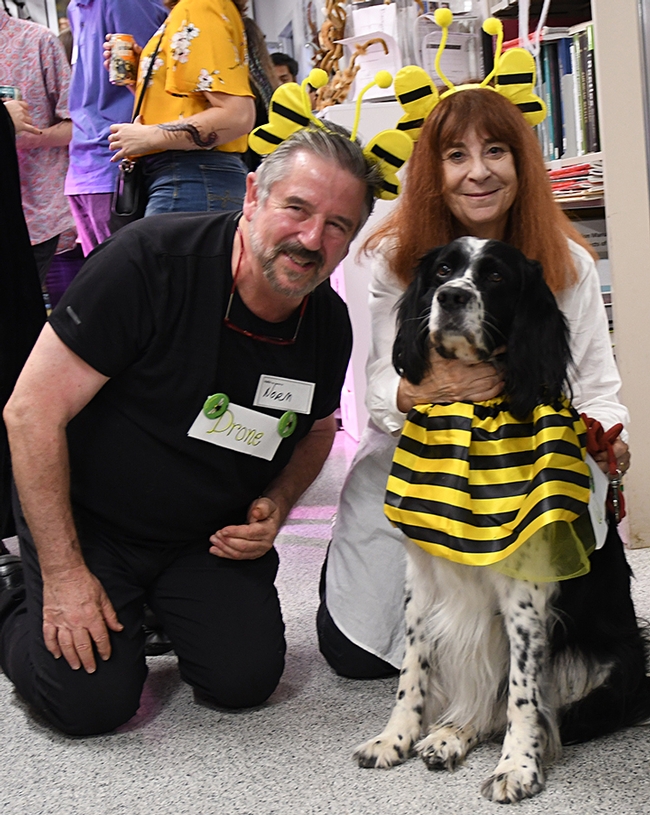 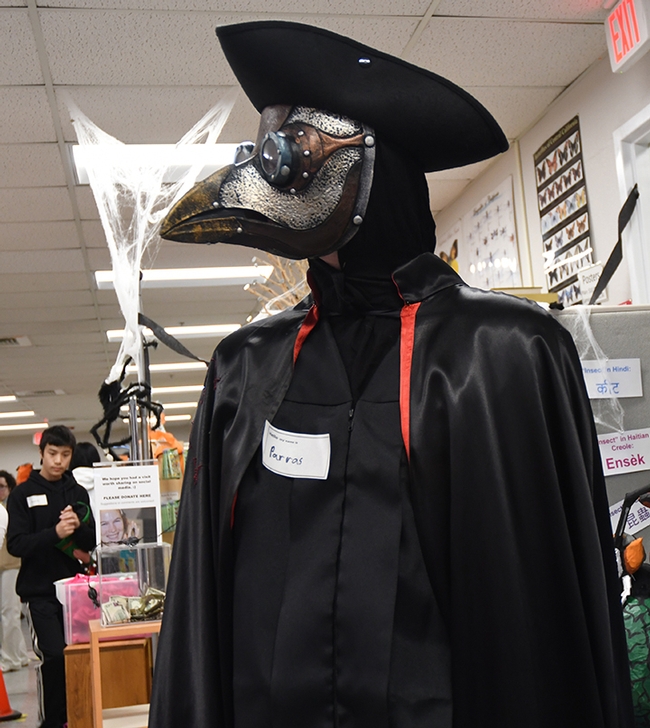 Parras Mcgrath drew a lot of comments with this costume. (Photo by Kathy Keatley Garvey) 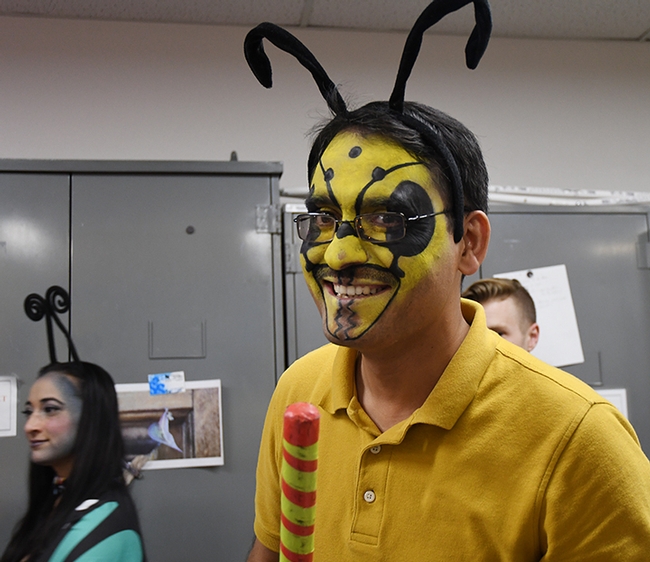 This was the first Halloween party for visiting scholar Syed Fahad Shah, a lecturer in the Department of Entomology, University of Agriculture, Peshawar, Pakistan. (Photo by Kathy Keatley Garvey) 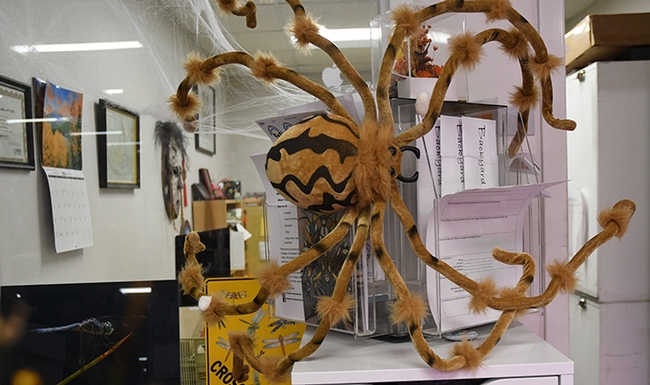 What's a Halloween party without a spider? (Photo by Kathy Keatley Garvey) 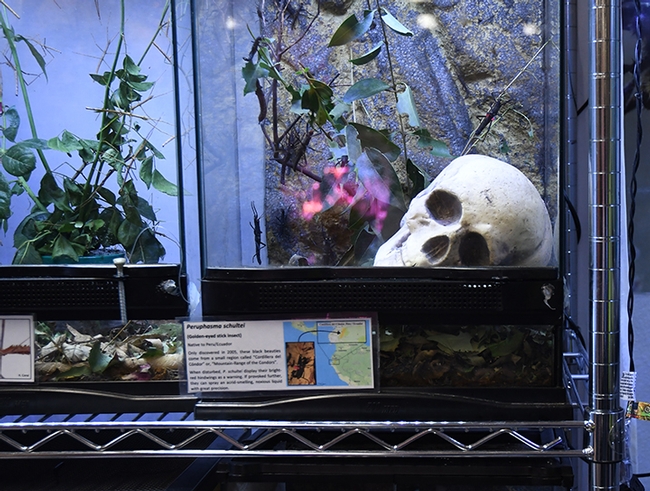