And, now the three-year collaborative project is a reality.

Hats off to the ag expertise of Nansen and the app development skills of three student computer scientists.

“Many variables are known to affect the actual spray coverage in crop fields,” said Nansen, an associate professor in the UC Davis Department of Entomology and Nematology said. “These include tractor speed, spray nozzles, spray volume, boom height, adjuvants, and weather conditions. But which ones are the most important ones? And are there possible interactions among some of these variables?”

Through Smart Spray, an app designed for both iOS and Android phones, growers can optimize and perform quality control of pesticide spray applications in their strawberry fields, Nansen said.

Computer science major Krishna Chennapragada, now an alumnus, launched the programming and initial design, tallying some 500 hours before his graduation. Today's team, in addition to Nansen, is comprised of recruits Gabriel Del Villar, a 2019 computer science graduate, and Alexander Recalde, a senior majoring in computer science. Together they have amassed nearly 400 hours on the project. Spray nozzles in a strawberry field. (Photo by Christian Nansen)
The project is truly multidisciplinary,” said Nansen, adding “One of the great things about UC Davis is that the barriers between colleges are very, very shallow." The computer scientists “have no experience in agriculture but they're really interested in the project and how they can contribute to sustainable food production,” said Nansen, adding “They're really, really good. We need people with their skills and the work they're doing also enriches their career.”

The Smart Spray app, they said, allows a user to predict spray coverage under different operational scenarios, including type of nozzles, spray volume, and tractor speed, as well as weather data, such as temperature, relative humidity and wind.  A key part of the process: the user places a water-sensitive card in the field prior to a spray application, photographs it, and uploads it into the app.

“If you're a grower, you might expect that when you go out to spray, that the more that comes out of nozzle, the better coverage you'll get,” Nansen said. “But, for example, if the wind is too strong, the relative humanity is too low, the pressure is too high, or you're going too fast--even when you're spraying large volumes--you can get very poor coverage and it's costly. Excessive spray can also reach other fields or nearby urban developments due to so-called “spray drift”.”

“Typically, a grower will spray 100 to 150 gallons per acre when he or she sprays,” Nansen explained. The water-sensitive card is yellow, but it codes blue when it interacts with moisture. “These cards have been around a long time,” he said. “They cost about $1 a card, not cheap. But it's inexpensive when you're spending thousands of dollars to control the pests. And the pesticide companies can pay for the cards.” A water sensitive spray card, which has turned blue because of good coverage (would otherwise be yellow). (Photo by Christian Nansen)
“Say you want to predict your coverage before you spray tonight or tomorrow,” Nansen explained. “Look at the weather conditions; what is the forecast? Then how are you going to do this? What if you spray 100 gallons and want to go two miles per hour. You enter the data—and all the other applicable data--on the Smart Spray app. It will predict the coverage you'll get with nine different nozzles. Those are the nozzles the typical strawberry grower uses, a number we based on almost 3000 experimental sprays over three years. So we did a lot of homework on this, for example—different spray rigs, different sizes of crops, different spacing of plants, and under different weather conditions. We covered all the ranges we could think of. We collected the water and operational data and we did the progression analysis (for the modeling).”

“Using this prediction, you can give it a name, say Field 6, and access it from the database,” Nansen said. “It's about quality control. It's a tool to predict and do quality control. It empowers the grower and also the sprayer to do a better job. For example, if the conditions are bad and the app shows the spraying will be only 20 percent effective, you shouldn't be spraying.”

Recalde said the user can also choose metric or imperial, as well as add the Global Positioning System or GPS.

“The Smart Spray is not just insecticides--it's fungicides, herbicides, and whatever you want to spray,” Nansen noted. “This app was developed for strawberries; if it were used for soybeans, onions and cabbage, it would still be useful but the accuracy would be off.” Pending apps: almond, pistachio and tomato.

The computer scientists enjoy working on the project. Recalde attended a Central Coast sprayers' meeting to talk about the app. “I heard ‘Oh, wow, you look so young!' he remembered. “Then we told them about this useful tool, different ways that technology can be applied to agriculture. They were really interested in how technology can improve what they're doing.”

Del Villar, whose computer interests also include teaching youth how to code, said he eagerly looks forward to making the Smart Spray app even better and more useful. Fluent in Spanish, as well as English, he plans to translate the app into Spanish. Other language translations are also in the works.

Now the team is seeking feedback to improve the app. “We're hoping growers will embrace it,” Nansen said, “and help us find ways to improve it.”

One feedback from Eric Flora, global field development and manager of Crop Enhancement, Inc., Paso Robles: “I think Smart Spray is a very helpful tool for growers and advisers as a guide to select spray tips, spray volumes, tractor speed, and other important factors to maximize sprayer coverage. Using spray cards is the best and simplest way to know, if you are penetrating everywhere in the canopy your pest target is a problem--placing cards where the specific pests attack the host gives the best information.”

State, federal and industry grants, including the California Strawberry Commission and the Floriculture and Nursery Research Initiative (FNRI) of the U.S. Department of Agriculture's Agricultural Research Service, help fund the project.

California grows about 88 percent of the nation's strawberries on approximately 34,000 acres along the California coast, according to the Strawberry Commission. Strawberries are available year-around in California.

For more information on the Smart Spray app, access the manual at https://bit.ly/2q3lsL3 or contact Nansen at chrnansen@ucdavis.edu or 530-752-2728. 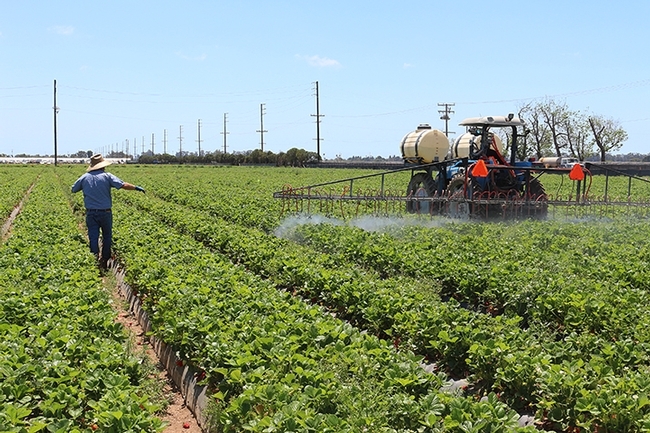 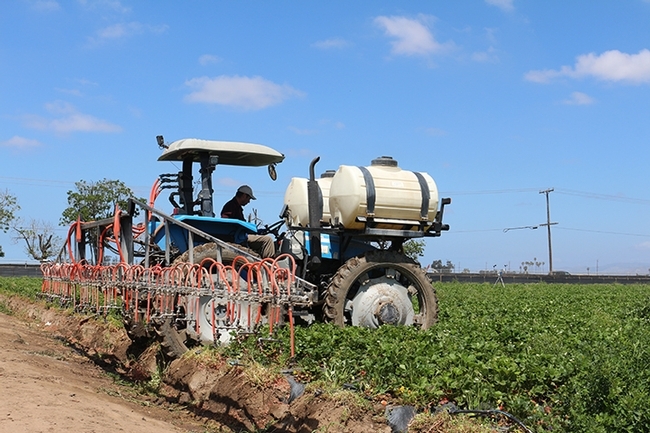 A spray rig in a strawberry field. (Photo by Christian Nansen) 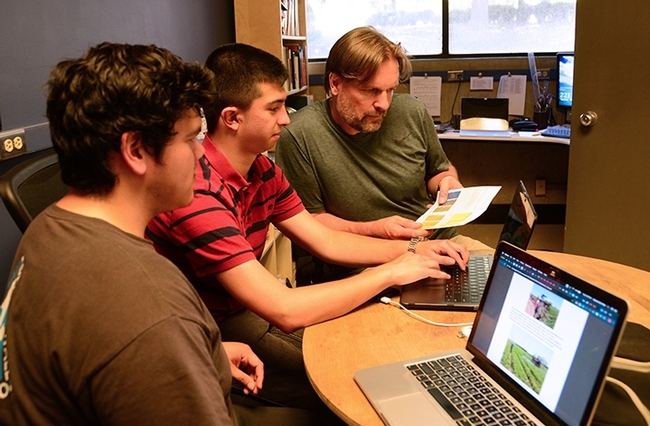