As most readers of this blog know, the loss of the pre-plant soil fumigant methyl bromide several years ago presents a serious challenge to business as usual in the California strawberry industry.  The search for alternatives, both to the fumigant itself and the practices built up around it over the many decades of its use, has not been an easy one.

Into this fray comes UC Santa Cruz sociologist Julie Guthman with her book Wilted: Pathogens, Chemicals and the Fragile Future of the California Strawberry Industry.  She tells the story of how the use of methyl bromide soil fumigation to address soil pathogen problems, from Verticillium earlier, now joined by Fusarium and Macrophomina, has indelibly changed the strawberry industry, from land use patterns, to labor, to publicly supported agricultural science to breeding priorities.  In her opinion, the future of our industry has become more tenuous, indeed, in her words is destined to become a landscape of ruin.

To open, the early part of the book really shines and underlines the tremendous amount of research that Dr. Guthman did, as it delves into the history of strawberry culture in California.  Beginning from European breeders dabbling with strawberry in the 17th century to the foundation of the California strawberry industry in 1880, then on through the breeding efforts of both the University and private interests (and to be sure, the attendant controversies most of the way), Guthman takes us through a highly interesting tour from the early years of discovery and development to the improvements in productivity, taste and to some extent disease resistance of the modern berry we know today.

As alluded to previously, the book's central argument, built up over several chapters, is the loss of methyl bromide is only the beginning of a fairly dark path forward.  She maintains that the strawberry industry in California will cease to be once the chemical fumigants, in particular the chloropicrin which has replaced methyl bromide, become too expensive or are regulated out of existence.

The California strawberry industry, so dependent on fumigants, has been bred for the wrong things and subsequently is not now poised to be particularly resilient to the change foisted upon it by their loss. Breeding has been built around methyl bromide, land use is determined around the ability to fumigate out problems and return to it with little time for rotation and rest, and labor is dependent upon the high yields enabled by fumigation.  It all fits together under efficacious fumigation, and will all fall apart without it.

One of the keener aspects of our loss of methyl bromide fumigation has been the emergence of two pathogens, Fusarium wilt and charcoal rot caused by Macrophomina, which has been a question for the scientific community to answer.  The author herself wades into this controversy, and floats the idea that epigenetic changes in these two pathogens, that is modification of the expression of the genes rather than the underlying gene code itself, brought on by continual strawberry cultivation and chemical soil fumigation may have resulted in the creation of more virulence and a subsequent emergence as serious pathogens in the strawberry production system.

This view of epigenetic expression resulting in the emergence of these two pathogens, intriguing however it may be, is not well supported by the evidence.  A recent paper out of the USDA describes differences in the DNA of the Macrophomina pathogen on strawberry and that of Macrophomina on other hosts. Additionally, the argument that we may have fumigated our way into this problem is significantly undone by strong suggestions that Fusarium was introduced from Japan, where it emerged in the late 1960's - well before fumigation was a widespread practice there.

Dr. Guthman moves on from this survey of what is happening with the loss of fumigation to discuss the alternatives, but is unable to find a suitable fit for replacing what we had with methyl bromide.  Anaerobic soil disinfestation (ASD), which is soil flooding with the addition of carbon sources to ultimately create a condition suppressive to pathogens.  But since the adoption of ASD by growers in California has been halting, Guthman, along with mentioning an efficacy which often falls short of that of fumigation, underlines that the large amounts of input required, from the amendments themselves to the water to the plastic covering.  She also discusses the use of soilless substrates, either in troughs carved out of existing beds or completely soilless systems grown indoors, but again notes the difficulty in this becoming widespread because of cost, technological complexity and necessity of importing inputs.

I believe that Dr. Guthman is not finding the solution she seeks because it cannot be found as a single thing.  The answer lies, and I know I am not alone in this view among our scientific community, in a number of practices, not all of them necessarily directed at reducing or resisting soil pathogens, being used together.  Developing something this complex takes the input of people from multiple disciplines, and we in the research community, from breeders, to plant pathologists, to pomologists, to growers, both from the public and private sector, have been doing just that for at least the past several years.  We don't have the solution yet, but we will get there, I am certain.

A final note is that the book would very much have benefitted from some editing.  Errors range from the mundane, such as the incorrect captioning of a picture of recently cut fumigation tarp as being “shredded by the wind”, to the more eye opening such as the unsupported statement of a private sector breeder saying that the UC breeding program under Dr. Shaw and Dr. Larsen did not do disease screens (they did, showed the plots at field days and wrote quite a few papers about them), to the breathtaking such as identifying a REIT (a real estate investment trust, which is a publicly traded company which owns, operates or finances real estate) as a “derivative” such as a futures contract, option, or swap.  These sorts of errors tend to undermine one's confidence that the rest of the very well researched story here is true.

Caveats aside, all in all, this new addition to the ever expanding library of commentary on the California strawberry industry is a good one and for those looking for a good detailed description of our industry would be well advised to pick it up and read it. 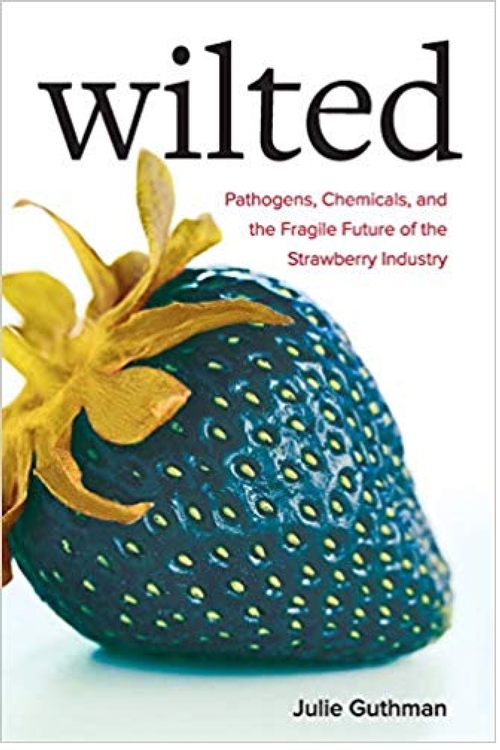 Comments: 5
Comments:
by Thom Flewell
on November 24, 2019 at 8:24 PM
Remember Mark Twain’s comment that ‘reports of my death have been greatly exaggerated.’
by Mark Bolda
on November 25, 2019 at 12:28 PM
Great seeing you this morning too Thom at the organic transplant meeting. Excellent discussion of the topic as a whole with good participation.

I agree with you, strawberries in California are a loooooong way from going extinct. There's too much incentive in the way of money and solvable problems for that to happen. Plus what would we all do with our time?
by Kyle
on November 27, 2019 at 1:53 PM
I have a foreboding of an America in my children's or grandchildren's time -- when the United States is a service and information economy; when nearly all the manufacturing industries have slipped away to other countries; when awesome technological powers are in the hands of a very few, and no one representing the public interest can even grasp the issues; when the people have lost the ability to set their own agendas or knowledgeably question those in authority; when, clutching our crystals and nervously consulting our horoscopes, our critical faculties in decline, unable to distinguish between what feels good and what's true, we slide, almost without noticing, back into superstition and darkness...
by Mark Bolda
on November 27, 2019 at 6:41 PM
Hi Kyle,
This is Carl Sagan, circa 1995? I am familiar with the trope that the relative loss of manufacturing in the US compared to others spells doom for the nation as a whole. To respond, I'll share that while manufacturing has indeed slipped as a percentage of the whole economy, in absolute terms it has grown. The other problem with this thinking is that it assumes that other countries are in stasis when they have not been at all. As we all know, there has been some very rapid growth in manufacturing in other countries over the past twenty years, most notably of course in China, who are catching up after having successfully reorganized their economies with the net result of a reduction in the relative size of the US manufacturing output globally.

Let's also push back on the idea, quite common I know, that service and information don't really measure up to manufacturing when it comes to economic activity. To make my point, let's take an example from our own little world of the berries. Have we not gone from producing something like 4000 crates of berries with six acre feet of water in the 1970's to producing on a regular basis in excess of 10,000 crates per acre with just 2.5 acre feet of water? None of the science that got us to these fantastic levels of efficiency was tangible like a widget coming out of a factory, but nonetheless this developed information and the service of extending it all out to the strawberry producers resulted in some pretty substantial gains to our economy.

Finally, I do agree with Dr. Sagan that for those of us whose work it is teach others about science have our work cut out for us. One can see how frustrated he was with what he saw as an expanding wave of ignorance and a diminishment of rational thinking in our society. Personally, I don't think the terminus of this trend is the dystopian view you share above, but likely something like we have now, because it's probably been that way since the founding of the Republic. So it goes, but certainly I'm not going to be one to throw up my hands and give up on teaching good science and the empirical approach to understanding the world that goes with it either.
by Mark Bolda
on February 28, 2020 at 7:54 PM
This book still sits with me. I've still been cogitating on it, the more I think about it I think Garthman was trying to prove the larger point of the failure of capitalism to serve the greater good but lost her way making it into an directionless collage of complaint. I've thought on how I would do it were I Julie Garthman, and a far more powerful approach would have been to organize her work into the Marxist theme of capitalism devouring itself as no more surplus value is left to be wrung out of labor as immigration ceases and growers shift to machine picking, all the while the ground yields less as disease problems wax in the absence of fumigation. As with Marx however, the precise outcome of this unfolding of local history would be unspecified and make for an unsatisfactory end.