With some of the time that the occasional rainy days have been affording me, I've been catching up with my professional reading.  In particular, an article the November 2017 edition of the Santa Cruz County Farm Bureau newsletter - like I said I was catching up - caught my eye.

The article concerned the first Farm Advisor in this county, Henry Washburn.  With a Stanford and UC education, Henry started his career with UC Cooperative Extension in 1917, and continued on for another 30 years.  While I knew of Henry and his work here, and also from time to time pass by his gravestone in the cemetery I walk through to get to work, being reminded of all what he did for the community and farmers here is sobering and reminds me of the great tradition we are following in our current capacity.

An interesting comment from Henry shared in the article was his initial difficulty with public speaking, especially since it was the only course he flunked in school.  Nevertheless, according to Henry, speaking in public ended up being almost his "life work" as the local advisor.

No surprise there.  Public speaking is very much a part of what we do as extensionists, and it's something we'd better master well if we hope to be effective at our craft.  It's also one of those skills that, and I'm sure Henry discovered this quite soon, academic study can only carry so far.  This is one knack for which real life experience has no substitute.

Put it this way.  It's been said a person who can part the stem of a wine glass with a gunshot from thirty paces will quite likely not be as sure and steady under the duress of a duel, with a pistol held by another aimed at his heart.  In the same vein, it's all fine and good to learn all the rhetorical devices and tricks to hold an audience's attention in the safe and protective confines of a classroom, but to actually put them into motion on stage in front of two hundred people in various stages of amity is very much another.

Experience, and only experience, is going to make the master here. 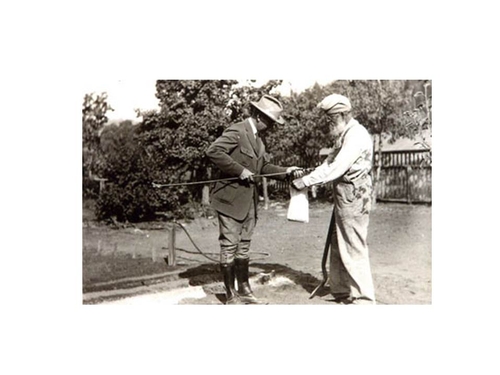 Henry Washburn and a grower in Santa Cruz county more than a few decades ago, apparently taking a soil sample. While our choice of clothing may have changed over the years, the importance of soil sampling most certainly has not.
Comments: 0
No Comments Posted.
Leave a Reply: