How many different bumble bee species have you seen or photographed this year?

Have you seen the black-tailed bumble bee, Bombus melanopygus? It's the earliest to emerge in this area.

We photographed several B. melanopygus on Jan. 25 near downtown Benicia.  Three were foraging on rosemary and one on a rose.

B. melanopygus is native to western North America and found from California to British Columbia and as far east as Idaho, it forages on manzanitas, wild lilacs, wild buckwheats, lupines, penstemons, clovers, and sages, among others.

Our little Bombus posse--Allan Jones, Gary Zamzow and Kim Chacon, all of Yolo County, and yours truly of Solano County--annually  compete to find and photograph the first bumble bee of the year. As earlier mentioned,  Jones won the 2020 contest--he photographed a B. melanopygus on Jan. 6 in the UC Davis Arboretum and Public Garden. No bumble bees are harmed in this contest. We don't poke 'em, prod 'em or pin 'em. We just take their picture, or rather, we capture their images.

The contest began in 2012 with our mentor, Robbin Thorp (1933-2019), distinguished emeritus professor of entomology, UC Davis Department of Entomology and Nematology. To memorialize him, the contest will now be known as  Robbin Thorp Memorial Bumble Bee Contest and will sponsored by the Bohart Museum of Entomology, where the professor spent much of his time.

Thorp, a member of the UC Davis entomology faculty for 30 years (1964-1994), achieved emeritus status in 1994 but continued to engage in research, teaching and public service until a few weeks before his death. In 2014, during his retirement, he co-authored two books, Bumble Bees of North America: An Identification Guide California Bees and Blooms: A Guide for Gardeners and Naturalists. He co-taught The Bee Course from 2002 to 2019. This is an intensive nine-day workshop affiliated with the American Museum of Natural History and held annually at the Southwestern Research Station, Portal, Ariz. It's geared for conservation biologists, pollination ecologists, and other biologists who want to gain greater knowledge of the systematics and biology of bees.

The good professor was always concerned about the declining bumble bees, especially Franklin's bumble bee, found only in a small range in Southern Oregon and Northern California. He was a global authority on bumble bees and sounded the alarm to protect bumble bees, including this one. Lynn Kimsey, director of the Bohart Museum of Entomology and a UC Davis professor, fears it is extinct. No one has seen it since Thorp spotted it in 2006. (See Bug Squad)

Meanwhile, keep an eye out for bumble bees, and do what you can to protect them (plant flowers that they prefer and don't use pesticides). Robbin Thorp would have liked that. 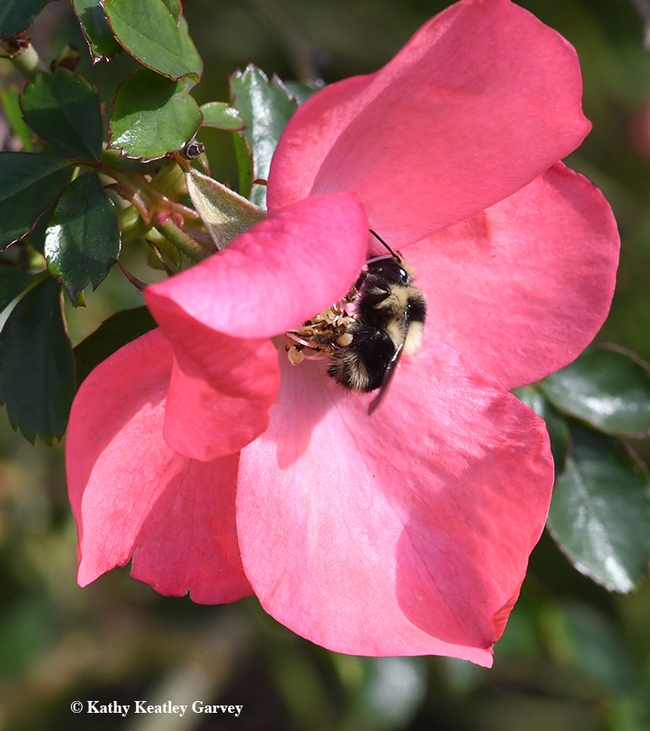 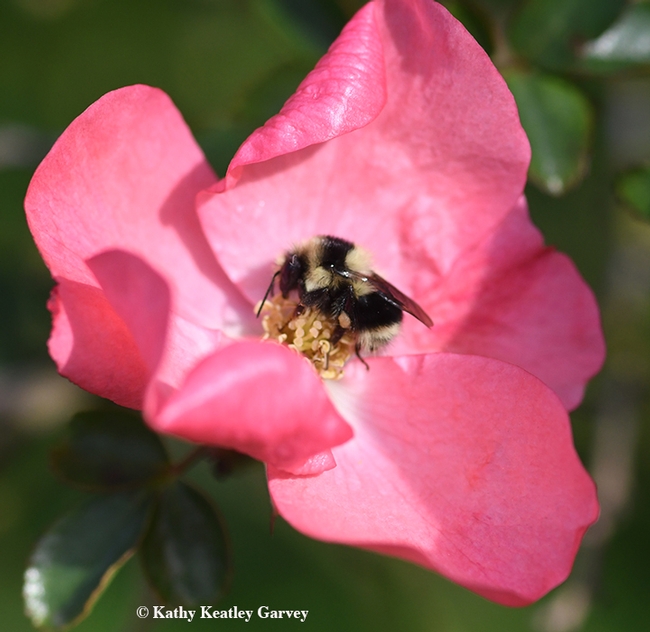 Come on in, the pollen is fine! Bombus melanopygus, the black-tailed bumble bee, nectaring on a rose in Benicia on Jan. 25. (Photo by Kathy Keatley Garvey) 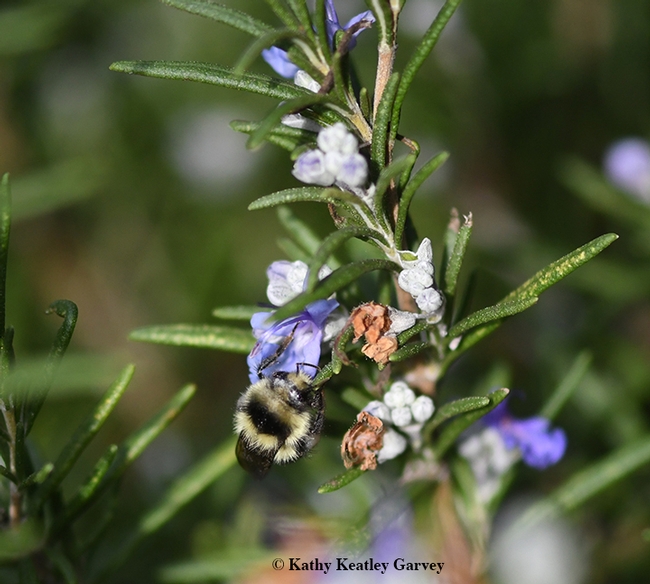 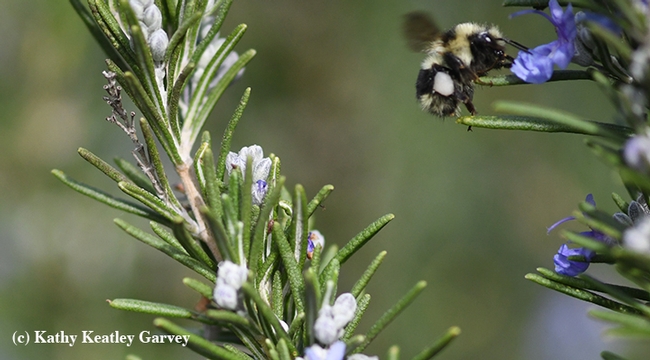