By Donna Woodward, U. C. Master Gardener of Napa County

Twice a year, Napa County Master Gardeners conduct vegetable field trials. Members of the field-trial committee plant three different varieties of the same vegetable and monitor the results so we can share what we have learned with the public.

In the spring of 2018, we chose sweet peppers for our trials. The three varieties chosen were Gypsy (a hybrid), Golden Giant (a hybrid) and Jimmy Nardello (open-pollinated).Seeds for both hybrid varieties were purchased from Burpee; the Jimmy Nardello seeds came from Baker Creek.

We started the seeds in 4-inch pots in a greenhouse and planted the seedlings in our gardens between April 25 and May 5. Drip irrigation was recommended. Since peppers like rich soil, we were advised to amend the soil with compost and add a balanced fertilizer, such as 5-5-5. We planted the peppers 18 to 24 inches apart and were cautioned to keep them well-watered in hot and dry weather but to avoid getting water on the fruit.

All three varieties produced plenty of tasty sweet peppers. Jimmy Nardello was a pretty, bright red pepper with a sweet, slightly spicy flavor. Gypsy was a yellow-green pepper which also had a piquant flavor. Golden Giant, true to its name, produced very large, rounded fruit with thick flesh. The others were elongated, tapering from broad shoulders to a pointed tip.

Our committee generally reported good results for all three varieties. All benefited from some support, but it was especially important for the Golden Giant. Small tomato cages worked well. The peppers did not suffer much insect damage, the only report being in mid-September. All three varieties were somewhat vulnerable to sunburn and blossom-end rot.

Participants completed a survey rating the three varieties, on a scale of 1 to 5, for flavor and productivity. The scores were all high, ranging from 4.3 to 4.6, with Gypsy taking the honors.

However, in accumulating the participants' comments, a more complicated picture emerged. Individual experiences were often contradictory. The only variety that got predominantly positive reviews was the Jimmy Nardello. It received the most praise for flavor and was also the most prolific. It was the earliest to mature, about a month earlier than the other two, and continued to produce long into the season.

Reactions to the other two peppers varied widely. Comments regarding Golden Giant's flavor included “bland,” “delicious,” “good but not outstanding” and “bitter.” Comments on Gypsy were also at odds: “prolific and tasty;” “not prolific enough and not tasty or sweet;” and “best taste; pretty colors.”

How do we explain the difference between the numerical scores and the comments? Apparently rating by numbers doesn't tell the story. The comments bring out some of the variables that can influence outcomes in such trials.

Growing conditions can vary widely within Napa Valley. Soils, sun exposure and elevation can differ even within a small area. The pepper variety that performs best for you may well depend on the conditions in your garden. There was also some variability in how participants followed recommended cultivation guidelines. A few tweaks in growing practices might yield different results. We gardeners all know that trial and error is a great teacher.

Perhaps naming a winner isn't the most important outcome of this trial. All three of these pepper varieties can produce excellent fruit, as can many other sweet pepper varieties. The most valuable lessons relate to growing peppers in general:

Peppers are susceptible to sunburn. Planting them close enough for the leaves of plants to just touch will help protect them from sunburn.

Leaf puckering is a symptom of phosphorus deficiency. Phosphorus affects the health and growth of the plant and helps the fruit to set and develop. Dig some into the planting hole when transplanting. Most pepper plants appreciate a few tablespoons worked and watered into the soil every couple of weeks during the growing season. If leaf puckering occurs, use more.

Garden-grown sweet peppers are delicious. They are a wonderful addition to green salads, stir fries and other dishes, adding color, flavor and nutrition. If possible, make room for sweet peppers in your vegetable garden this spring.

Workshop: “Spring and Summer Vegetables” on Sunday, March 8, from 1 p.m. to 3 p.m., at the Yountville Community Center, 6516 Washington Street, Yountville. Do you want nutritious, easy-to-grow and utterly fresh food from your garden this spring and summer? To register, call the Parks & Recreation Department at 707-944-8712 or visit the department's web site.

The UC Master Gardeners of Napa County are volunteers who provide UC research-based information on home gardening and answer your questions. To find out more about upcoming programs or to ask a garden question, visit the Master Gardener website (http://napamg.ucanr.edu) or call (707) 253-4221 between 9 a.m. and noon on Mondays, Wednesdays or Fridays. 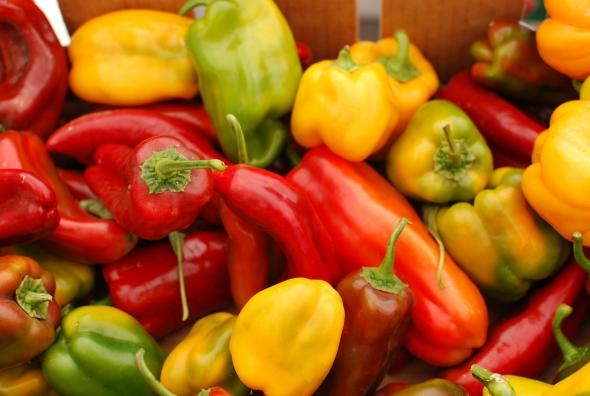