The industrious honey bee buzzed around a lot during the Linnaean Games at the Entomological Society of America’s recent meeting in San Diego.

But back to the bees.  One of the questions asked was: “The monarch (butterfly) is actually the second most popular state insect. What insect is the most frequently adopted state insect?”

Another time the Linnaean judging panel posted a photo on the screen and asked the Linnaean teams: “Considering this pest of honey bee hives, what is its common name and the family to which it belongs?”

It was the small hive beetle, Nitidulidae.

Can you answer these questions? (Answers at the end)

1. The order name Hymenoptera can be interpreted as meaning “membranous wing” or “married wing,” which refers to the way the front and hind wings of bees and wasps are linked by little hooks.  What is the name of these hooks?

2. How many eyes does a honey bee have?

3. Problems with honey bee hives in what state led to the recognition of colony collapse disorder?

4. What Greek city state used the honey bee as a symbol on its coins?

5. In apiculture, what is the term used to describe the dark discoloration on the surface of comb honey left on the hive for some time, caused by bees tracking propolis over the surface?

1. Hamuli, which are the leading edge of the hind wing.

If you got all five right, you're probably an apiculturist. Three to four right, you probably keep bees. One to two right? You've (1) been around bees, (2) listen to the news, or (3) you're related to a beekeeper. Miss all five? You may want to take a course, read a book, or visit an apiary to learn more about these tiny agricultural workers. 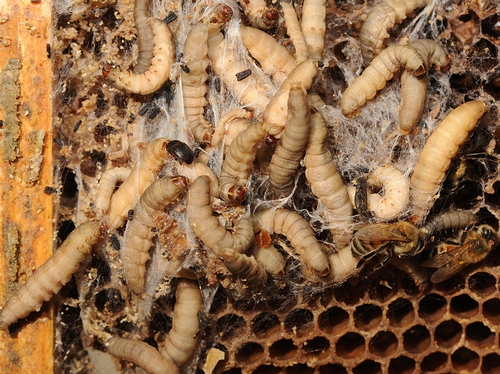 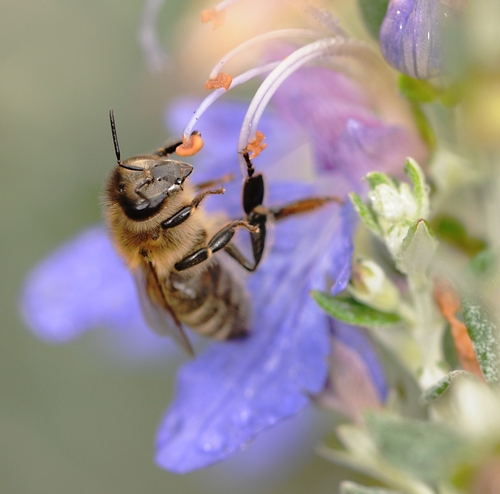 Winter Visitor in the Garden
IN THE DEAD OF WINTER, a honey bee visits a bush germander (Teucrium fruticans azurelum) at the Haagen-Dazs Honey Bee Haven Garden at the Harry H. Laidlaw Jr. Honey Bee Research Facility, UC Davis. One of the questions asked at the Linnaean Games was "How many eyes does a honey bee have?" (Photo by Kathy Keatley Garvey)
Tags: Entomological Society of America (111), honey bee (224), Linnaean Games (23)
Comments: 0
No Comments Posted.
Leave a Reply: