Bug Squad
sitenum=63
Happenings in the insect world
Ever Seen a Plume Moth?

Have you ever seen a plume moth?

Or has a plume moth ever seen you?

We spotted a pterophorid plume moth (family Pterophoridae) yesterday on our back door in Vacaville, Calif. The t-shaped moth stayed in the same spot the entire day, from dawn to dusk, even when we entered and exited the door multiple times.

Its shape is what makes it unusual. Butterfly expert Art Shapiro, distinguished professor of evolution and ecology at the University of California, Davis, told us awhile back that the "T-square shape is classic."

In some respects, the pterophorid plume moth is fit to a "T."

At rest, the plume moth holds its slender wings at right angles to body, giving it a T-shaped profile.

In his book, California Insects, UC Berkeley entomologist Jerry Powell (now emeritus) explains why they're called plume moths..."because the forewings are deeply notched and the hindwings are divided into three linear parts, each with long scale fringes. When perched, the insects roll the forewings around the folded hindwing plumes, resulting in peculiar sticklike or craneflylike appearance, unlike any other moth."

Most are nocturnal and are attracted to lights, Powell adds. (Like porch lights!)

Its ancestors lived millions of years ago. Wikipedia tells us that a fossil species from the extant genus Merrifieldia originates from the Oligocene of France. The Oligocene, a geologic epoch of the Paleogene Period, occurred 33.9 million to 23 million years ago. Today some 160 species of plume moths live in North America.

So why did the plume moth visit us? Well, it's a common moth. The adults feed on nectar and pollen (plenty of that in our pollinator garden) and caterpillars of some of the species chew the leaves of garden plants, including geraniums and snapdragons (we have both).

We also have artichokes, and the larvae of one species, the artichoke plume moth, can be a pest when the vegetable is grown as a perennial, according to the UC Statewide Integrated Pest Management Program website.

One thing is for sure: once you see the plume moth, you'll always recognize it. 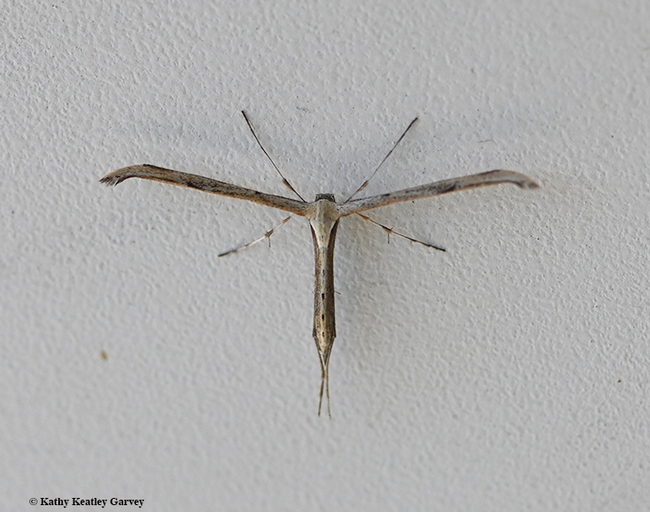 A pterophorid plume moth (family Pterophoridae) in Vacaville, Calif. on April 2, 2020. (Photo by Kathy Keatley Garvey)
Focus Area Tags: Agriculture, Economic Development, Environment, Natural Resources, Pest Management, Yard & Garden
Tags: Art Shapiro (263), Jerry Powell (12), plume moth (1), UC Berkeley (7), UC Davis (264), UC Statewide Integrated Pest Management Program (23)
Comments: 2
Comments:
by Luke Sutherland
on June 14, 2021 at 2:15 PM
i saw this outside when i was little and i didnt know what ti was and i was terrified and now i know what it is, thanks
by Michelle Jacinto
on July 15, 2021 at 9:57 PM
Hi, I identified a Morning Glory Plume Moth that came into my home on July 15th, 2021 by way of information from Google Lens after taking the moths' picture with my phone in the Lens app. I have seen them before but never found out what they were. I live in Forestville, CA. Google lens is very helpful. Thanks for the rest of the info about this beautiful moth. I was able to guide it back outside again.❤️👍
Leave a Reply: