Bug Squad
sitenum=63
Happenings in the insect world
Ever Seen a Coronavirus-Equipped Mantis?

Sometimes you just have to display your sense of humor.

Take the case of a huge praying mantis sculpture that anchors the Davis, Calif., front yard of entomologists Robert and Lynn Kimsey of the UC Davis Department of Entomology and Nematology.

It's a coronoavirus-equipped mantis, complete with gloves and a face mask.

Yes, it's well protected. Yes, it's staying home. And yes, it's keeping a safe distance and not touching its eyes, nose or mouth as it searches for prey.

The score, so far:

The story behind the story: Their nephew found it at a garage sale in West Sacramento last year and during the holiday season, gifted it to Bob Kimsey, a forensic entomologist and adjunct professor.

What to do with a five-foot-long, three-foot-high praying mantis?

"We dressed it up," said Lynn Kimsey, director of the Bohart Museum of Entomology and UC Davis professor of entomology.

"By next week it's going to have bunny ears and we've decided to put an empty 6-pack of Corona bottles underneath it," she said.

It resembles the praying mantis, Mantis religiosa, that we photographed at noon, Sept. 2, 2018 in the Kate Frey Pollinator Garden at the Sonoma Cornerstone, Sonoma.

We spent half an hour watching Ms. Mantis praying but not "preying" as honey bees buzzed her head.

Her appetite apparently satiated by multiple bee breakfasts consumed earlier that morning, she seemed quite content just to watch. Or maybe she was counting? This is the coronavirus-equipped mantis that's drawing lots of smiles in the Davis front yard of entomologists Robert and Lynn Kimsey of UC Davis. (Photo by Lynn Kimsey) 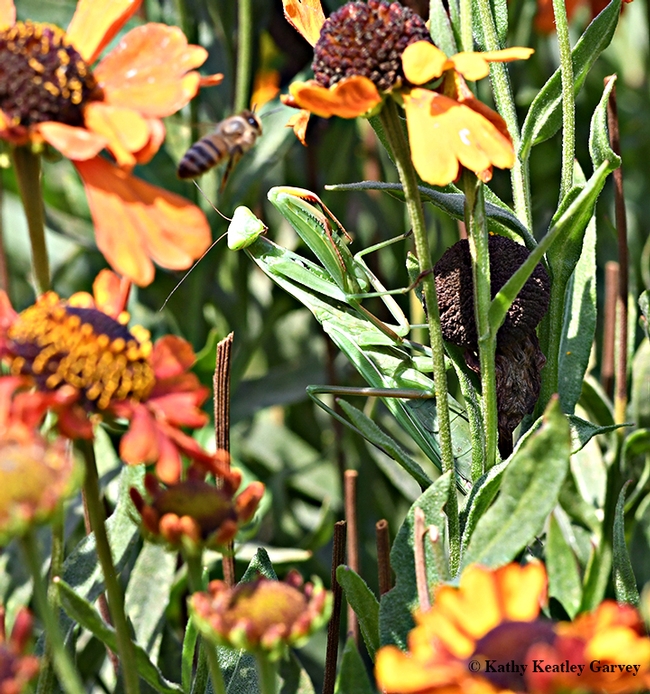