1) Why are rhododendrons such a popular flower in Humboldt County?

Rhododendrons and Azaleas grow really well in the coastal zones of Humboldt County. They grow in abundance and in pockets of the wild throughout Humboldt. Once established in the garden they are very drought tolerant, needing only occasional summer water.

Rhododendrons were very popular in the late 1880s to the early 1900s which is why there are so many huge old specimens growing in the gardens of our lovely Victorian homes. They are mostly hybrids from England which added to their popularity.

Many ‘old timers' remember Cottage Gardens Nurseries which had acres of rhododendrons and bulbs, they called themselves the Holland of North America. See their 1919 catalogue here .

They shipped cut rhododendron flowers and daffodils as well as other spring flowers across the nation. Rhododendron ‘Countess of Derby', with its big pink bloom, proved particularly suitable for air shipment. It was planted all over Eureka under the moniker ‘Eureka Maid'.

2) Are they native, or how did they make their way here?

Northern California has 2 native rhododendron species. Rhododendron occidentale, the Western Azalea, makes a great garden plant. It can be enjoyed from now through June at Stagecoach Hill Azalea Reserve north of Big Lagoon (link) for location

Rhododendron macrophyllum, with its big pink flowers, is best seen in June in the Del Norte Redwoods, but many people who have property with redwoods also have them growing in their gardens. Photo by Don Wallace
3) What makes rhododendrons such a great addition to the garden?

Rhododendrons come in many sizes from giant trees with leaves 3 feet long, to diminutive shrubs with leaves as narrow as pine needles or as small as ¼ inch. There are many flower colors and leaf textures so will please rhododendron connoisseurs and weekend gardeners, alike. There are even several highly scented rhododendrons and azaleas.

4) Are there a wide variety of types and colors of rhododendrons?

Rhododendrons bloom in a range of colors from pristine white to nearly black purple, with some of the most popular colors being the sunset and sherbet mixes of yellow, pink and orange. There is no blue; Rhododendrons with names like ‘Bob's Blue' and ‘ Blaney's Blue' are really violet or purple.

There are 4 distinct groups of rhododendrons, most of which grow in the Northern Hemisphere. These groups do not cross with each other to make hybrids, much to the chagrin of novice hybridizers.

Lepidote, (with scales) those are the rhododendrons commonly confused with azaleas as they generally have smaller leaves and flowers and plants that generally do not grow very big. But in the Lepidote series are also the large rangy Maddenii rhododendrons, many of which have huge white fragrant flowers on medium to large plants often with reddish peeling bark.

Elepidote, (without scales) are the plants we are most familiar with in our gardens. Many, many hybrids have been made using species and hybrids to create a wide range of colors and flower shapes. These generally have large leaves and flowers. Azaleas are elepidote.

Azalea, these can be deciduous, evergreen or semi deciduous. Most Azaleas only have 5 stamens, 1 for each lobe of the flower. Azaleas have smaller leaves covered in small adpressed hairs that lie flat and face the end of the leaf.

Vireya, are tropical epiphytic plants that are mostly in South East Asia, Borneo, Papua New Guinea and Northern Australia. They are mostly very frost tender so many people grow them in cool greenhouses like orchids, or in sheltered spots outside on the coast. They come in a wide range of colors and many are highly and sweetly scented. Photo by Don Wallace
5) What's the difference between rhododendrons and azaleas? Do people sometimes get them confused?

We are often asked “what is the difference between rhododendrons and azaleas?” All azaleas are rhododendron but not all rhododendrons are azaleas. In most cases, rhododendrons can be larger shrubs with larger leaves and flowers than azalea plants. Azalea flowers usually have five stamens, while the rhododendron flowers generally have ten. Azalea plants are deciduous, evergreen or semi deciduous like our native Western Azalea. Azaleas have smaller leaves covered in small adpressed hairs that lie flat and face the end of the leaf.

Though not all small leafed rhododendrons are azaleas! Confused yet!?

6) Do you have any tips for successful rhododendron growing?

When choosing a new rhododendron or azalea for your garden think about how big and wide it will be in 10 years. You don't want it to cover your front windows or cover the walk to your front door. An important consideration is what does the plant look like when it is NOT in bloom. Rhododendrons are generally green bushes; choose ones with interesting leaves and full lush growth that will look as good in bloom as out of bloom. Many deciduous azaleas have lovely fall leaf color to add seasonal interest.

7) What is the rhododendron growing season here on the North Coast?

In our mild climate the bloom season is really long, from late December to mid June there are rhododendrons or azaleas in bloom. Though the peak is from mid April to mid May which is why Eureka's Rhododendron Festival, which was canceled this year, takes place the last weekend of April.

8) Tell me a little bit about the Rhododendron Society and what it does to promote this popular flower.

The Eureka Chapter of the American Rhododendron Society is one of 50+ chapters worldwide. The society's goals are to encourage growing rhododendrons in private gardens and public gardens and parks, and understand and preserve native habitats around the world, including our own area. The Eureka Chapter  holds meetings 8 times a year to bring in interesting speakers on topics ranging from rhododendron hunting in the wild to growing and collecting rhododendrons for public botanical gardens, like Humboldt Botanical Garden, and home garden, also scientific research projects. 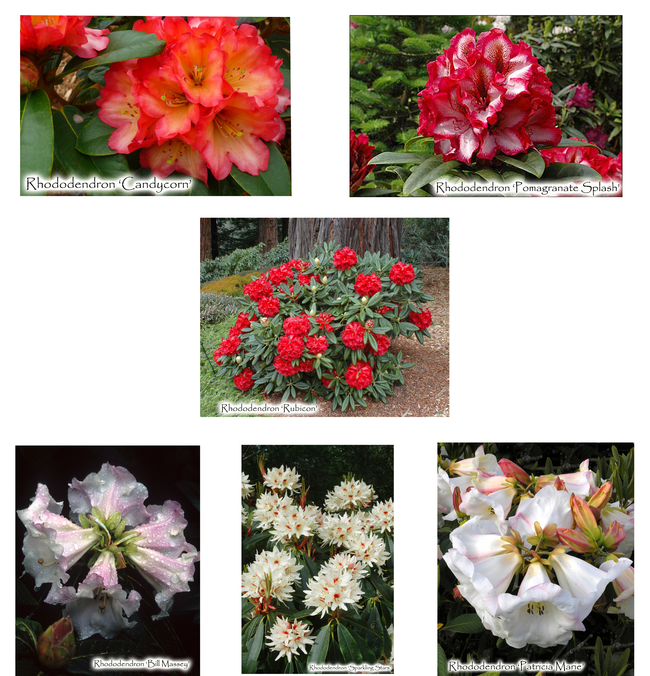 Photos by Don Wallace
Comments: 0
No Comments Posted.
Login to leave a comment.