This last October my “Christmas” Cactus started to bloom just before my husband and I were to leave on a trip to Tahoe.  I was a little disappointed to think I was going to miss most of its bloom time.  But when we returned, at the end of the month, it was still going strong.

And it kept going through Thanksgiving and Christmas with beautiful lush red flowers.  I have had this plant for many years and it has bloomed in the past.  I have to admit that it has been ignored a bit, sharing a crowded tray with three other plants, and getting water once a week.  And while its fellow tray companions had gotten new soil and bigger pots last year, this plant had only gotten a bit of fertilizer as I knew it liked to be a bit pot bound.

I didn't think much about it until it started forming buds and flowering again at the end of March.  It continued all through April and the Easter season.  Wow, I didn't remember this happening before.  What was going on? Did I have a Thanksgiving cactus, a Christmas cactus, or an Easter cactus?

Schlumbergera is the genus for Thanksgiving cactus and Christmas cactus with the species names being truncata for Thanksgiving cactus and bridgesii or buckleyis for Christmas cactus.  The problem is they are frequently mislabeled, commercially, or called holiday cactus or Zygocactus.  Easter cactus used to share the same genus, but has been reclassified as either Rhipsalidopsis or Hatiora depending on the expert. Its species name is the same in both, gaertneri. All three-holiday plants are from Brazil and live in trees.  Easter cactus is not sold as frequently as the other two.

It was easiest to rule out Easter cactus. That plant has a flatter, star-shaped flowers, that while lovely in their own way, did not resemble the more tubular flowers of Thanksgiving and Christmas cacti. It did not look like the blossoms on my plant.

The Clemson Cooperative Extension Fact Sheet 1554 had some helpful explanations on how to tell Schlumbergera truncata, Thanksgiving cactus, and Schlumbergera bridgesii, Christmas cactus, apart.  Looking at a few features of their flowers and the margins of the flattened stem segments will help tell the difference.

Schlumbergera truncata, Thanksgiving cactus, is also known as crab cactus.  It has claw-like points on the edges of its flattened stem segments.  Its tubular flowers are held horizontally on the plant and the anthers are yellow.  Schlumbergera bridgesii has flowers that droop downward and have purplish-brown anthers.  Its flattened stem segments have a more scalloped edge also called tear dropped.

I also needed to make sure there was only one kind of plant in the pot.  I have other holiday cacti in the front room.  I have been known to stick a broken off a segment of the plant in whatever pot has the most room. Okay there was only one plant in this pot. So, in looking at the flattened stem segments and back at the pictures of the blossoms I think I have Schlumbergera truncata, Thanksgiving cactus.

But what was up with it blooming in spring? Both Thanksgiving and Christmas cacti need a short day or at least 14 hours of darkness to set their flowers.  I at least found out I am not alone, in the About Succulents blog, by Joseph, on the desert succulents website.  He said that both Thanksgiving and Christmas cacti could have what he called “surprise” flowers, with the bloom being between March and May.  I love that name because it truly had been such a nice surprise. 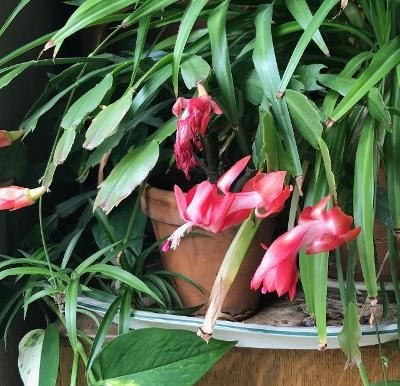 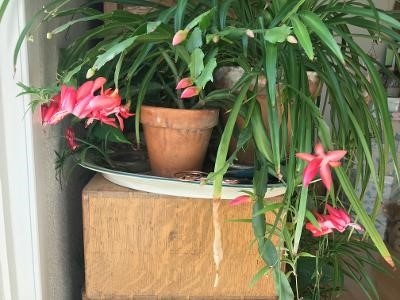 Comments: 2
Comments:
by Howard Fitzpatrick
on May 23, 2020 at 8:08 AM
Thank you for the research. I now know our "Christmas Cactus" is actually a Thanksgiving cactus. However, I guess it's true that a cactus by any other name would look the same.
by Karen Metz
on May 23, 2020 at 1:57 PM
Very true, Howard.
Leave a Reply: