The California dogface butterfly poster is the work of Bohart Museum of Entomology associates Fran Keller and Greg Kareofelas and is available at the Bohart gift shop.
Ever seen the California state insect, the dogface butterfly (Zerene eurydice), or toured its celebrated habitat near Auburn on the Shutamul Bear River Preserve, owned by Placer Land Trust (PLT)?

Due to the coronavirus pandemic, PLT currently offers no tours of what it calls "a special place," but you can take a virtual tour by watching its newly released YouTube video.

Found only in California, the dogface butterfly is more prevalent at the preserve than anywhere else in the state. It is there because its larval host plant--false indigo (Amorpha californica)--is there.  False indigo, a  riparian shrub, thrives on the preserve among poison oak and willows and along the  banks.

The Bohart Museum of Entomology, UC Davis, is closely aligned with PLT and the butterfly habitat. Naturalist Greg Kareofelas, a Bohart associate and an authority on the butterfly, serves as a volunteer tour guide.  He and fellow Bohart associate Fran Keller, a UC Davis alumnus and now a professor at Folsom Lake College, created the Zerene eurydice poster offered in the Bohart gift shop. Keller also authored the 35-page children's book, The Story of the Dogface Butterfly, with photos by Kareofelas (and Keller) and illustrations by then UC Davis student Laine Bauer. The book tells the untold story of the rare and elusive butterfly,  and how schoolchildren became involved in convincing the State Legislature to select it as the state insect.

When you watch the YouTube video, that's Kareofelas' net holding a dogface butterfly, which he showed to tour participants and then released. He has reared the butterfly from egg to larva to chrysalis to adult and presented programs at the Bohart Museum. Naturalist Greg Kareofelas and California dogface butterfly expert is an associate of the Bohart Museum of Entomology and a tour guide for the Placer Land Trust's Shutamul Bear River Preserve, home of the butterfly.
The butterfly, so named because of a poodle-like silhouette on the wings of the male,  was adopted as the official California insect on July 28, 1972, but entomologists had selected it as the state insect as early as 1929. Their choice appears in the California Blue Book, published by the State Legislature in 1929. (Read more on how the butterfly became the state insect under the Ronald Reagan administration.) In 2019, the U.S. Postal Service issued a first-class stamp bearing its image.

And now, in the summer of 2020, plans are in the works to celebrate the 50th anniversary of its being named the state insect. At one of Kareofelas' Bohart Museum talks, he mentioned that July 28, 2022 "will be 50 years since the dogface butterfly was named the California state insect and that we should do something to celebrate that fact."  PLT officials have similar thoughts. They are collaborating for a memorable celebration.

Stay tuned. The celebration, like the colorful butterfly, will take flight. 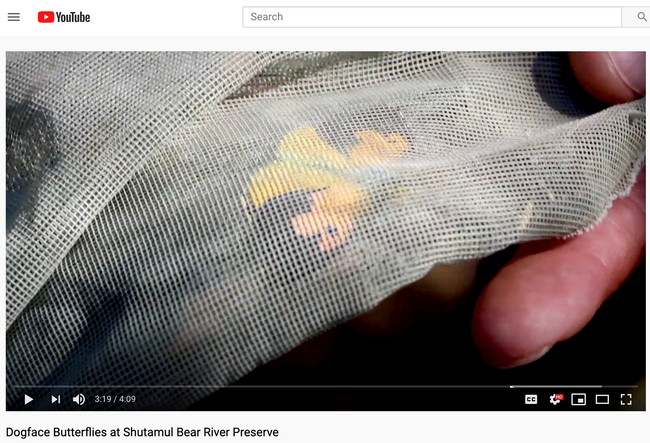 This is a screen shot from the Placer Land Trust (PLT) video on the California state insect. Bohart Museum associate and PLT guide Greg Kareofelas had just netted the butterfly in a display-and-release activity. 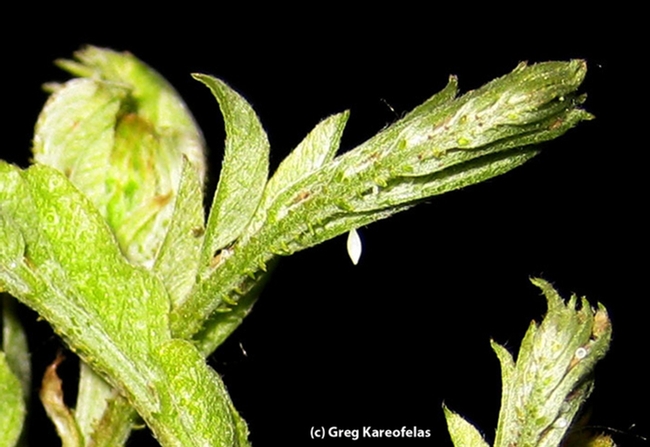 This is the egg of the California dogface butterfly, Zerene eurydice. (Photo by Greg Kareofelas) 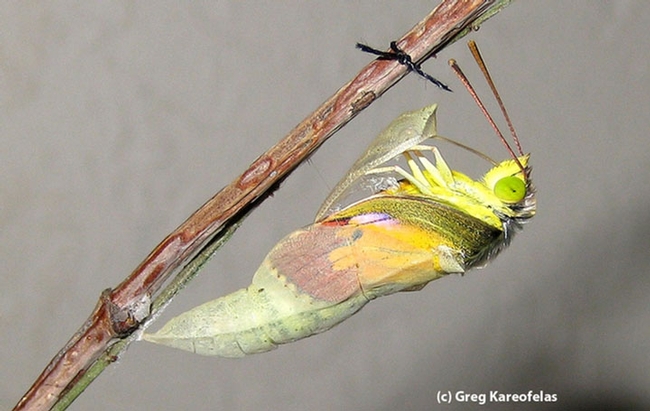 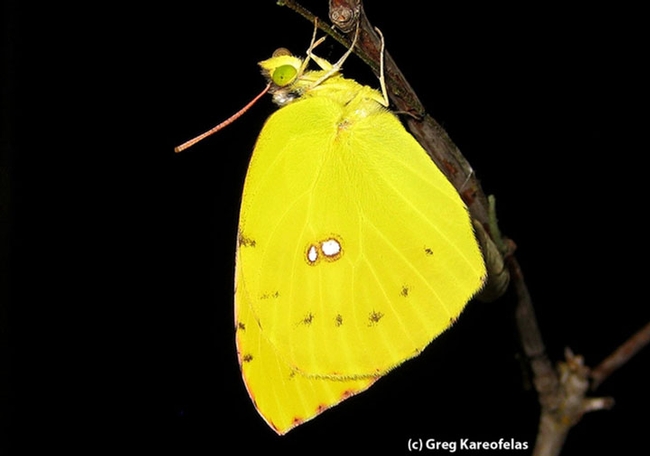