Artisan cheesemaking coming of age in California
Published on: March 7, 2011

The development of an artisan cheesemaking industry in Sonoma and Marin counties is enhancing the ambience of agriculture in the picturesque rural community, according to Stephanie Larson, the director of UC Cooperative Extension in Sonoma County.

She made the comment in an article that ran over the weekend in the Santa Rosa Press-Democrat about dairies adding value to their product by creating gourmet cheeses. Much of the data shared in the story came from a report developed by UCCE community development advisor Ellie Rilla, Coming of Age: The Status of North Bay Artisan Cheesemaking, which was released in January.

Marin and Sonoma counties have 22 commercial cheese plants which produce 8 million pounds of artisan cheese each year, with a retail value of $119 million, according to the study.

"It's the largest concentration in California," the story quoted Rilla. She said one-third of the businesses have been making cheese for three years or less.

Though growing, the North Bay's artisan cheese business is tiny compared to California's commodity cheese industry, which produces 2 billion pounds of cheese annually, half of it mozzarella.

Many artisan cheesemakers turn to organic production and special blends to set themselves apart. For example, producer Craig Romanni plans to be the area's first buffalo mozzarella maker and the Bohemian Creamery near Sebastopol makes nine different cheeses, including a sheep/cow blend infused with cacao nibs, the story said. 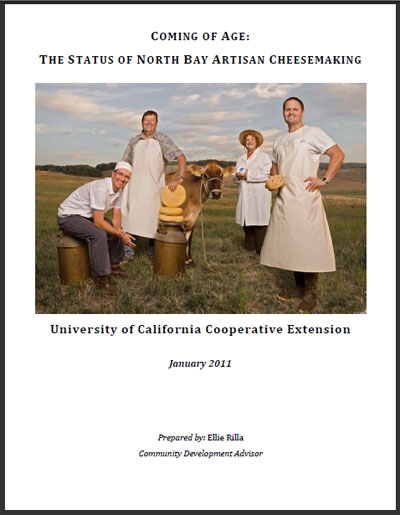