Avocados are a semi subtropical tree that can be found in high elevations of cloud forests in Mexico and Central America. A delicious and highly nutritious fruit, the cultivation of avocado has spread around the world. In California, growers are having commercial success in areas with year-round mild climates, such as San Diego, Riverside, Santa Barbara, Ventura and San Luis Obispo counties. Avocados evolved in a very moderate climate and are vulnerable to extreme weather. As a result, they are poorly adapted to the high temperatures and low humidity that can sometimes occur in California, especially in Southern California. In July 2018, there was a historic heatwave that caught everyone off guard, some areas in San Diego reached temperatures of 118-122 °F with winds up to 30 miles per hour. Fortunately, most growers were well into harvesting or just about done during that time, so the 2018 harvest wasn't as impacted as one first thought. Parts further north with later harvests were significantly affected.

Under regular conditions, an avocado tree is extracting water from the soil through its roots, which moves through the tree and exits through leaf pores known as stomates. A stomate is a group of cells in the epidermis made up of guard cells and subsidiary cells. Guard cells are a pair of kidney-shaped cells that form the opening of the stomate. When the guard cells are turgid (full of water), they are open and allow the entry of carbon dioxide for photosynthesis. However, this also exposes the leaf to potential water loss. When the guard cells are flaccid (less water) usually due to high temperature (when temperatures usually rise above 88 °F) and low humidity, this slows the loss of water and to prevent air exchange. The opening and closing of stomates is driven by plant hydration, temperature, relative humidity and wind. The loss of water from a plant's leaves through the stomates acts as an evaporative cooler, maintaining leaf temperature close to that of air temperature. The movement of water through the roots and out the leaves also cools the rest of the tree, preventing the trunk and branches from overheating.

Unfortunately, it seems that heat waves always occur during the peak of the season. Most trees are starting to begin to produce that year's summer flush that will become the following year's bloom which will set to produce the succeeding crop load. Fruit and flowers normally drop if the temperature is 100 °F or above. Thus, the effects of a heatwave can impact several years.

The most sensitive varieties to that heat were the ‘Hass' and ‘Fuerte', whose new leaves shriveled like plastic held to fire. Less affected were the varieties of ‘Sir-Prize' and ‘Sharwil', which had blackening and curling on some new leaves. Some of the toughest were the ‘Pinkerton', ‘Lamb Hass', and ‘Reed'. They showed nearly zero evidence of having been uncomfortable under such a terribly strong sun. Keep in mind, however, that how well any variety of avocado will do under high temperatures is mainly dependent on how well-watered the tree is, in addition to how healthy its root system is overall.

According to Tim Spann from the California Avocado Commission (2018), he suggests that there should be every attempt made to harvest fruit when temperatures are below 90 °F, and no harvesting should take place when temperatures exceed 95 °F. Temperature in the shade should be monitored during harvesting and, when possible, harvesting crews should be moved to the coolest, least exposed areas of the grove. This prevents heat damage to the fruit.

Field bins should be placed under the trees while being filled to protect the harvested fruit from sunburn. Once filled, bins should be moved to a shade structure (open-sided roofed building), or covered with bin covers or light-colored tarps if they cannot be immediately transported to the packinghouse. You should never cover the bins with tree scaffolds or branches, due to the potential spread of Polyphagous Shot hole borer. The insect can potentially hitchhike in the bins and be transported to another grove or the packing house. Also, never leave filled bins exposed to the direct sun. The surface layer of fruit can easily heat up to more than 15 °F above ambient temperature when exposed to direct sun. Acute sunburn will only show on fruit after it is packed and is a major quality detractor. To avoid water loss and decreased fruit quality, do not hold fruit too long after harvest. Transport fruit to the packinghouse at least once per day, if not twice daily (Spann 2018). Bins should not be left in the grove for more than 8 hours after harvest. Cover bins during transport to avoid sunburn and to reduce water loss

Watering enough is absolutely the most important thing you can do to help an avocado tree cope with heat above its comfort zone. Growers should be irrigating their trees in advance of the heat, to ensure that their trees are fully hydrated. An additional 50% of the budgeted amount of water is recommended to be applied the day before a heat wave (Spann 2018). For extended heat waves, daily pulses of irrigation are recommended to maintain the trees' water status and reduce air temperature. A well-watered tree will tolerate the stress of a heat wave much better than a tree that is suffering from water stress.

Cover crops provide a multitude of benefits based on species selected. Growing cover crops can increase soil organic matter, improve soil structure, enhance nutrient cycling, aid in weed suppression, provide habitat for beneficial insects and pollinators, and build on- farm resiliency to climatic changes (Rowe 2019). For avocado growers in Ventura County, improving water infiltration is a noticeable benefit. All growers that had reported issues of runoff prior to cover cropping have seen dramatic improvements in retaining water in the soil. The ground cover also helps cool the soil and lower air temperature. For a drought prone area and sensitive avocado trees, this could be the difference in surviving a 120 °F heat wave.

Avocado roots grow right at the surface of the soil. Mulch keeps that level of the soil comfortably cool and hospitable for avocado roots. The more roots a tree has, the more water it can draw up into its canopy to cool itself. Growers should apply between 3 and 8 inches of organic mulch, such as natural bark chips, straw, or compost, is ideal. Mulch also provides an insolation from sunlight and can reduce air temperatures.

As climate change worsens, it's likely that heat waves and intense droughts in California will become a more common occurrence, placing the long-term future of crops like avocados in jeopardy. 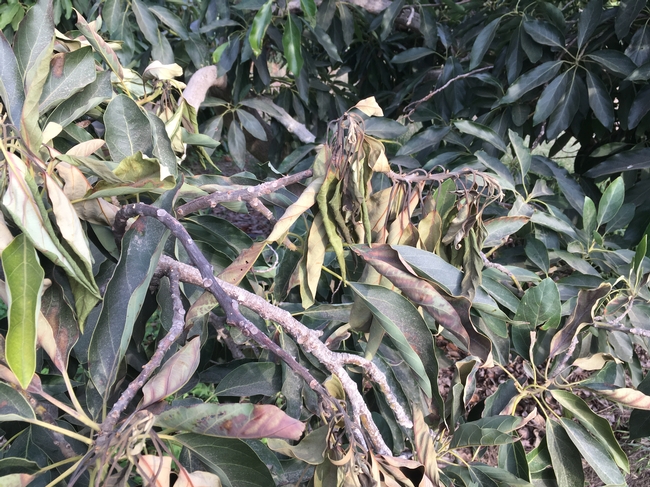