Bug Squad
sitenum=63
Happenings in the insect world
What Do Honey Bee Colonies Do During a Raging Wildfire? The Aug. 19 Vacaville fire races toward a bee hive on Pleasants Valley Road. (Photo by photojournalist Paul Kuroda of paulkuroda.com, used with permission)
What do honey bee colonies do when a raging wildfire heads straight toward their hives (bee boxes)?

No, the bees do not abscond with their queen and relocate, says Norman Gary, emeritus professor of entomology at the University of California, Davis.

Gary, known as "The Bee Man," has kept bees for more than seven decades. He's a bee scientist lauded for his research, his writings (his latest book is The Honey Bee Hobbyist: The Care and Keeping of Bees), his professional bee wrangling, and his work with Hollywood movie producers, documentaries, and talk shows. He's also a musician known for donning a full-length "bee suit" while playing the B-flat clarinet. (See more information on his career)

We asked "The Bee Man" to comment on what bee colonies do during a fire. He broke it down like this:

"Bees react to smoke by fanning, motion, flight, and immediately ingesting nectar and honey," he says. "Smoke disrupts their defensive behavior.  That is why beekeepers smoke bees when manipulating and inspecting bee colonies.  Some have speculated that feeding behavior, gorging on honey and nectar in response to smoke, would enable colonies to take honey during migrating from the fire area. I have smoked thousands of hives during my career.  There was never any indication that bees left the hive area in response to smoke.  Migration of the colony away from the fire and smoke would be impossible because the queen is full of eggs and much too heavy to fly.  Consequently a colony that migrated from a fire could not survive without the queen.  Wild colonies that nest inside of large tree trunks high above ground level may initially survive the fire.   But they may eventually starve if all of the vegetation with their flight range has been destroyed." Norm "The Bee Man" Gary, emeritus professor of entomology at UC Davis. (Photo by Kathy Keatley Garvey)
Fire victim Caroline Yelle, 28, owner of Pope Canyon Queens (PCQ) on Quail Canyon Road, Vacaville, lost 500 bee hives Aug. 19 when the fire raged through her bee yards and business operation. Her mentor, friend and business partner, longtime beekeeper Rick Schubert, lost his home at 8307 Quail Canyon Road--also the PCQ business office. (See Bug Squad blog for background information)
Yelle noted that when beekeepers want to inspect their colonies, they smoke their hives to quell or calm the bees.  Smoke masks the alarm pheromones. "However,  if they smoke them too much, it's a natural defensive instinct for the bees to load up on their honey resources, just like when they swarm or when a fire is approaching." "Bee Man" Norm Gary playing the B-flat clarinet. Beekeeper Rick Schubert provided the bees. Schubert lost his home and bees in the Vacaville fire on Aug. 19. (Photo by Kathy Keatley Garvey)
"More specifically, if a fire happens during the day, the forager bees that are outside when it happens won't return to the hive that's on fire," she said. "They most probably will swarm somewhere in a tree and congregate away from the burning hive and end up drifting into a surviving hive. That will affect the dynamics of the entire surviving colony for days and weeks following a fire."

However, the Aug. 19th fire occurred at night. All of the bees, including the foragers, were inside. "That did not leave any chance for the colonies," Yelle said.

"Everything burned to the ground with no signs of life or even wood left when the fire reached a pallet (4 hives).  I have been finding only cleats and nails in a pile of ash. That gives you an idea on how strong was that fire."

"I did have one pallet of hives that the boxes didn't burn all down, but the bees died and brood is dying," she said.

Surviving Bees in Jeopardy
In the few surviving hives, the blazing heat killed the capped brood but some adult bees are still alive. "The colonies are low on population, and the queen has just started laying again.  It will be a challenge for all beekeepers with surviving hives to restock the resources and rebuild the brood, meaning the bees are still in jeopardy."

Yelle credits a Bodega firefighter with saving her hives at another location--in Pope Valley. "He's a real hero and his name is Boone Vale, a volunteer fire captain with the Bodega Bay Fire Department and a bulldozer operator," she said. "We did lose about 60 hives," she said, but Vale saved 70 when he "pushed the hives away from the burning ones. He was on his way home after who knows how many hours of battling the fire and still stopped to save the hives."

"This was an absolute disaster," said Gary. "Rick provided packaged bees for almost all of my TV shows and movies during the past 30 plus years," he said. "Rick has always been close to UC Davis beekeeping activities.  He was the only commercial beekeeper who frequently attended our Bee Biology Group meetings at the Bee Biology Facility.  His sister worked for me one summer.  He is a fine gentlemen as well as an outstanding professional beekeeper!"

"I hope they can find some support from the industry or some other source, such as a Go Fund Me project," Gary said. "My daughter recently bought a country home west of Winters near Rick's property.  The night that fire burned Rick's home, my daughter and husband were celebrating their first night at their new home.  But they were evacuated in the middle of the night!  Their property was saved only because another local fire a few weeks earlier had burned enough in a nearby area to provide a partial fire break!" 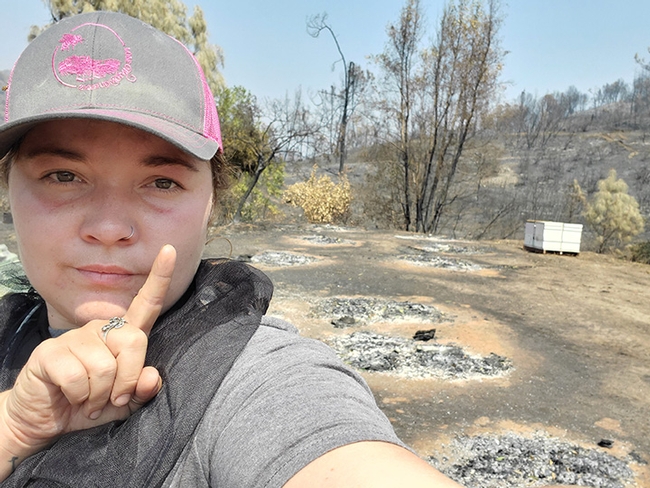 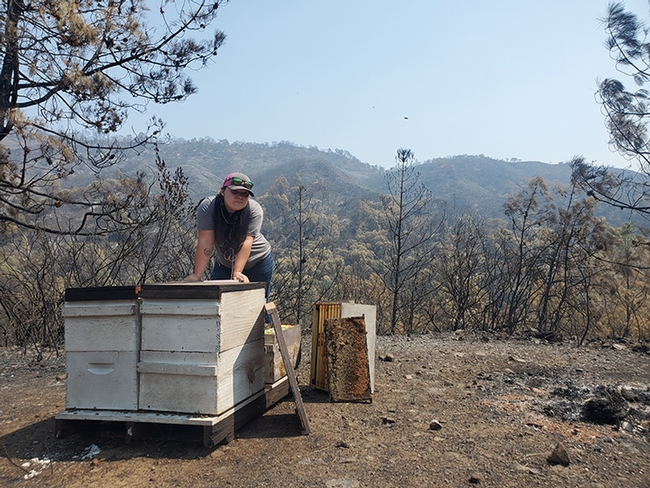 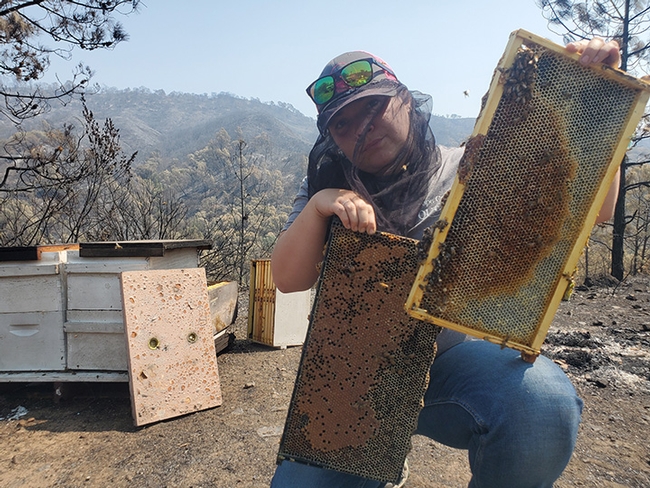 Dead brood and dying bees are in the half-burned hives belonging to Caroline Yelle, owner of Pope Canyon Queens. (Photo by Carolyn Yelle) 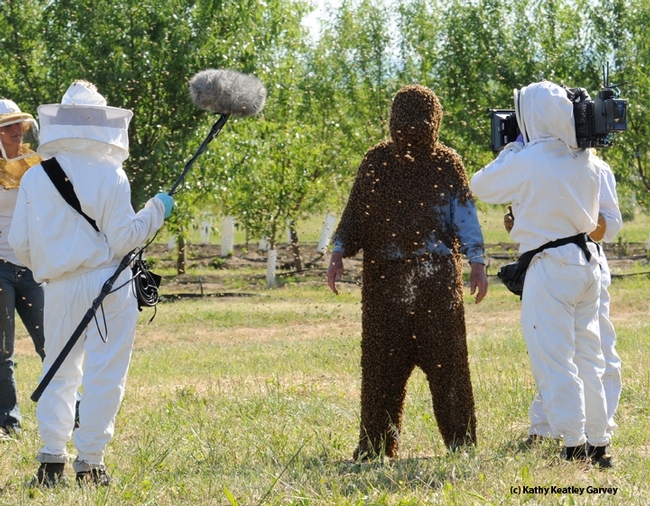