NOTE:  UCCE Master Gardeners do not recommend eating any herb unless it's 100% identified by a professional.  For safety's sake, please do not eat any herb, plant, etc. from your yard until you've identified it.

It seems that I have an abundance of the herb called “Black Cumin” (Nigella sativa) in my yard. This herb has beautiful blue or white flowers that grow to about one foot.  These flowers contain pods that carry many seeds called “black cumin fruit” or nigella seeds, as we know them. Other names include black cumin, black onion seed, and black sesame seed. The list doesn't stop there, though. Nigella seeds are also called “kalouji” in India and in the US also referred to as “charnushka."   The seeds are either used as an oil or ground into a spice and for centuries they have been touted to have medicinal benefits.  As a spice, they are used mostly in mid-eastern/Mediterranean cuisine.  They have a pepper/onion taste and are used in sauces, sprinkled on salads, in curries, and lentil dishes alike. Nigella seeds also pair well with root vegetable dishes as well as squashes such as spiced butternut squash.

However, the black seed of Nigella sativa has been historically and religiously used for thousands of years for preventing and treating many kinds of diseases.  The history of this herb is fascinating, as far back as the Egyptian times, it was used medicinally for treating many common maladies, including digestive complaints, internal parasites, and to reduce swelling in the extremities. It was also combined with other oils to treat skin diseases or scattered between layers of woolen clothing as a natural insect repellent.  The first-century Greek physician Dioscorides, who has been called the father of Pharmacology, recorded the use of cumin as an oil he called ‘Melanthion' to treat nasal congestion, toothache, and as a diuretic, along with its common uses for indigestion and female disorders. In the fifth century, Hippocrates is also known to have valued the herb for treating liver function and stomach disorders[1]. Today, the plant is available as a supplement, typically in the form of capsules of black seed oil.  Type in Black Cumin on the internet and you'll get tons of hits on products and medicinal uses.  It's used to help in the treatment of asthma, high blood pressure, diabetes, inflammation, cough, headache, eczema, fever, dizziness, and the flu.  There are even claim that it helps fight cancer, aids in weight loss improve fertility, and balances cholesterol[2].

All in all a miraculous plant that I have extracted the seeds from by simply waiting for the plant to dry out and rubbing the pods together until the seeds fall.  Another way is placing the pods in a paper bag; allow to dry out completely, then rub the paper bag in your hands to release the black cumin seeds. These should be stored in a jar out of direct sunlight.  Making oil from the seed is a lot more involved and there are numerous websites that will provide instructions on how to do so, or you can buy the oil already made. 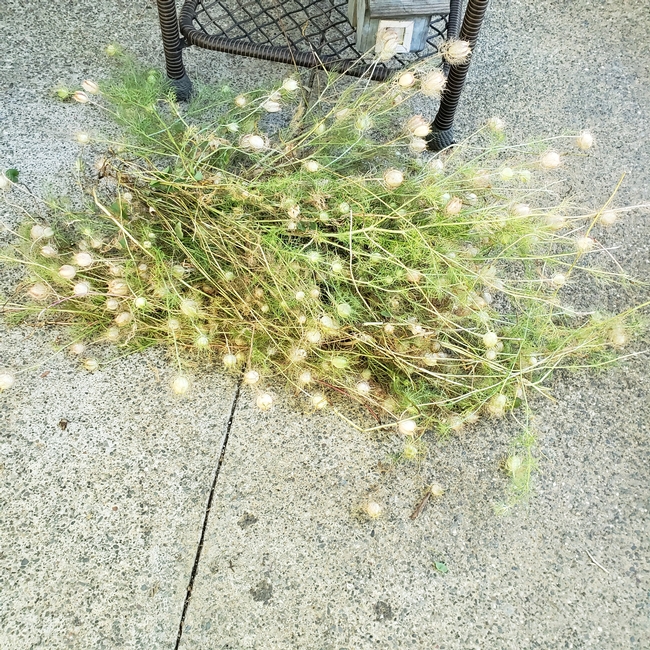 Dried nigella stalks.
Comments: 2
Comments:
by Helen jones
on September 19, 2020 at 7:24 AM
I made the same mistake. You have two plants confused. Nigella damascena is an ornamental
In the same family. It does not have the same benefits as nigella sativa & some sources claim
That it is poisonous.
by Ellen Zagory
on September 20, 2020 at 3:13 PM
I believe that what we mainly have in our gardens is Nigella damascena. Nigella sativa has slightly different shaped seed pods. Please see the article at this link. Has good photos.https://www.arthurleej.com/p-o-m-Aug12.html
Leave a Reply: