Mockingbirds in the Tomato Bed

I don't know why I never thought about it before, but I just realized that birds like tomatoes!  This is probably not a newsflash to most backyard gardeners, but I never knew until I watched a mockingbird happily devouring my Sungold cherry tomatoes today.  Of course, birds eat fruit so it makes sense that tomatoes and vegetables are fair game too, but, fortunately, I never had a reason to worry about it in the past.

As I watched the mockingbird perched on the tomato cage, I assumed it was eating insects.  I even hoped that it might be hunting the tomato hornworm that I suspected had made its home there.  My husband then pointed out that it was eating the cherry tomatoes!  Sure enough, we caught it red-handed (red-beaked?).

After a little research, I learned that mockingbirds are notoriously voracious when it comes to tomatoes.  Some articles even characterized mockingbird as the worst culprit when it comes to birds eating tomatoes.  Luckily, mockingbirds haven't been a noticeable problem in my vegetable bed previously, but I thought it would be prudent to research how to protect tomatoes from birds for future reference.  Ultimately, finding the right method or combination of methods that will work to protect the plants from birds will involve trial and error.

One approach is to protect the tomato plants with a physical structure such as a cage or netting around the plants.  This will ensure that the birds cannot reach the tomatoes.  If using netting, check it frequently to make sure birds or other animals don't get tangled and trapped in it.  This approach can have a few downsides, including that the birds can't eat insects that are harmful to the tomatoes. It also is harder to maintain the plants, inspect them for pests, and to harvest the tomatoes.

Another option is to frighten birds away by adding moving and noisy objects to the vegetable garden.  These objects could include wind spinners, shiny objects like old DVDs or aluminum pie pans, or fake animals like snakes or owls.

A different approach is to provide an alternative source of water and food for the birds.  For example, one theory is that birds sometimes eat tomatoes because they are thirsty; accordingly, placing a birdbath in the garden may provide the birds with an alternative water source that they may prefer.  In my experience with other animals, however, providing other options doesn't mean an animal will give up the option you would like them to avoid.  But it could be worth a try.

One imaginative suggestion is to purchase a box of plastic red Christmas balls on sale after Christmas. (Not glass, for obvious reasons.)  At the beginning of the growing season and when the plants are large enough, hang the balls in the plants. In theory, the birds will try to eat them, but find that they're hard and lose interest. The birds will then leave the tomato fruits alone when they ripen.  I'm skeptical, but the idea of Christmas balls in the vegetable garden sounds fun.

What will I do about the Sungold cherry tomatoes?  Nothing.  At this point, many of the tomatoes are split from the recent heat waves and so it's fine with me if the birds eat them.  Besides, it's fall now and I've enjoyed them all summer.  I'm fine sharing this year.  But next year, I might consider trying those Christmas balls . . . . 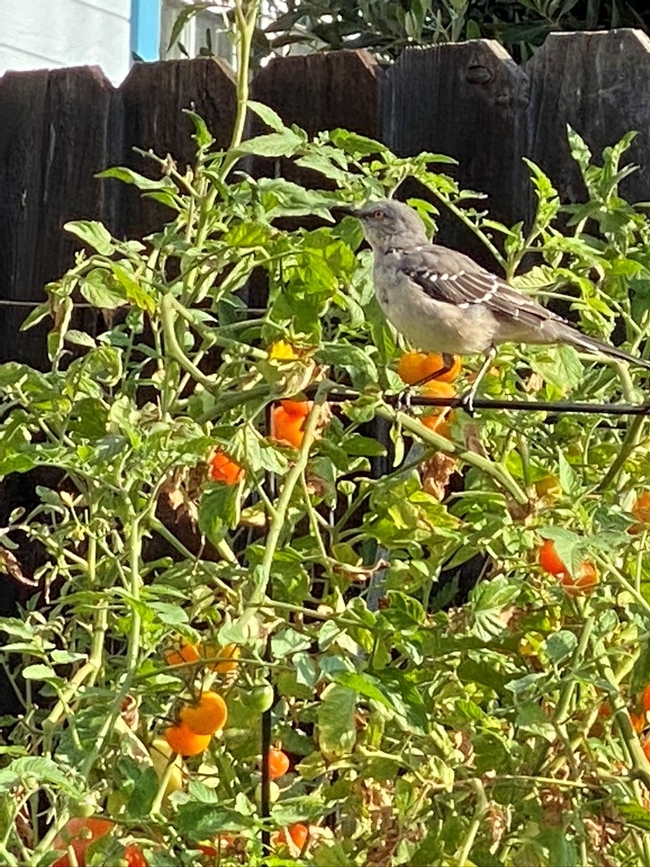