Boxwood. You see it all over – and for good reason. They are oh so versatile, easy to prune and shape, and a lovely bright green. They've been a  mainstay of residential and commercial landscapes for as long as I can remember. They are, however, slow-growing, rather fussy about soil, and are susceptible to root rot, branch cankers, and blight. They also need regular water. Let me propose Coyote bush, Baccharis pilularis as a great alternative. Although this sturdy native is typically overlooked, savvy gardeners are discovering it can do most anything boxwood can do and with none of its drawbacks.

First, its landscape usefulness: Coyote bush comes in a variety of sizes, from low and sprawling to rounded to an imposingly large shrub. And while it might look rangy in the wild, it responds well to pruning – like boxwood. A  small variety forms an undulating carpet, another can be shaped as a  specimen – even topiary, and others placed as privacy screens and hedges. A  bit of shearing keeps coyote bush lush and full. If need be, you can hack it to the ground and it will grow back beautifully.

Best of all, it provides terrific habitat in your garden. It's an important and popular source of nectar for bees and butterflies, but even more importantly,  it provides food for over a hundred native insect species – which are very important for nesting birds. Many of these insects prey on the aphids, mites  and whiteflies that damage other plants in the garden. Coyote bush blooms in fall, making it a critical source of nutrients for over-wintering insects.

Second, Coyote bush doesn't need to be babied. Once established, it needs no supplemental water. It can, however, tolerate moderate summer water so no need to reconfigure your irrigation. Nor is it picky about where you plant it, growing happily in loose, sandy soil or slow-draining clay; in full sun or in partial or light shade.

Third, it's a resistant survivor. Waxy coating on its leaves retards water loss,  while resinous oils on the leaves repel deer. The leaves also contain a high concentration of fire-retardant organic compounds, so low-growing coyote bush can be a good choice in fire-safe landscaping. If it does burn, coyote

bush will often re-sprout from the root crown.

The most popular coyote bush in our area is B. pilularis 'Pigeon Point' – a  dwarf clone cultivar whose progenitor was reportedly discovered just south of Half Moon Bay. It mounds from one to three feet and quickly spreads out eight to ten feet wide. It only takes a couple of years to fill in, much faster than the prostrate ceanothus or Manzanita varieties that might otherwise be selected.

Another popular subspecies is B. pilularis consanguinea which grows three to six feet tall and is attractive along fence lines or pruned as a hedge or verdant specimen plant. As a specimen, its rounded form should be periodically pruned to keep it full and not leggy. Consanguinea matures in a  year or two, so are great plants to begin site restoration.

Whichever coyote bush you choose, hosing it off every couple of weeks in the summer will keep it looking its green and shiny best.

Male coyote plants are typically used in landscaping (Pigeon Point plants are all males), as the fluffy white flowers on the female can create unwanted volunteers. Some people like the fluffy flowers, others find them rather boring but, if you want to grow your own bird seed, plant females.

So, if you have some boxwood you're looking to swap out or a bare spot with a half-day or more of sun that needs some cheery green, plant Coyote!

Susan Kornfeld is a UC Master Gardener who works as a fine gardener in the Bay Area. The article was edited by Cynthia Nations, a UC Master  Gardener. 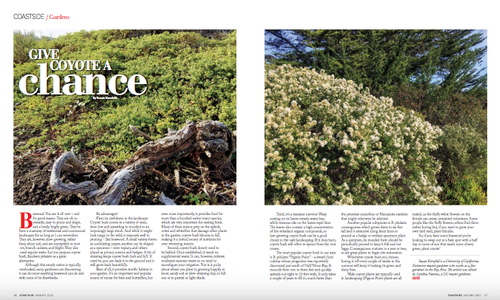