Bug Squad
sitenum=63
Happenings in the insect world
Winter Monarchs: Thankfully, They're Out There A monarch caterpillar on tropical milkweed in Vacaville, Calif. in the summer of 2020. (Photo by Kathy Keatley Garvey)
Thankfully, they're out there.

As he mentioned in his email: "So, at 1:25 p.m. a female monarch flew directly over my head, roughly 8' off the ground, near the corner of Oak Avenue and 8th Street. It was headed northeast very lazily."

Shapiro noted that Kathy Keatley Garvey saw a monarch in Benicia on Jan. 23, "so this is the second sighting known to me this year in this general area. If there are really only 3000 or fewer overwintered in the whole state, I guess we won the lottery!"

So, the count as we know it: Art Shapiro of UC Davis
Shapiro has researched the butterflies of Central California since 1972 and maintains a research website. He has been saying all along that monarchs are on life support (see Bug Squad blog).

Now some folks are blaming tropical milkweed, Asclepias curassavica, a non-native, as a serious threat in the massive decline of the monarch population.

James told us in an email: "I have been involved with monarchs for 43 years, and the single, overriding thing that I have learned is that the monarch is a highly adaptable creature! It has an incredible ability to adjust to changing environmental circumstances. In Australia, it took less than 100 years to change its core physiology as part of adaptation to a different climate. Adapting to man-made environmental challenges may take monarchs a while but I believe it can happen."

"I believe that the widespread and intensive use of neonicotinoid insecticides is one likely factor behind the current monarch population decline," James says. "But even with insecticides, insects can develop resistance over generations. The few monarchs that are alive and well in California currently are the survivors, those that have beaten the perils stacked against them. Clearly, we need to try and make life as fruitful as possible for these survivors, to aid in their population recovery. These monarchs will produce progeny that are also ‘fitter' than the general population and we need to ensure that milkweed is there for them, particularly during spring in California." David James of WSU
The WSU entomologist related that "On Jan. 19, the official announcement of the number of monarchs seen during the annual Thanksgiving counts at California overwintering (OW) sites in 2020, was made. The news was not good. After our routine family visit to selected overwintering sites at Thanksgiving, I made the prediction that there would be less than 2000 total butterflies at the sites.  Unfortunately, I was correct.  The official number counted was 1914.  This is down from around 30,000 in 2018 and 2109 and about 220,000 in 2017. While this is undeniably shocking and cause for concern, the picture may not be as bleak as the raw numbers suggest. There is apparently, this winter, a much larger population of breeding monarchs in southern California and also in the Bay Area of San Francisco."

"The monarch as a species is particularly good at trying different things," James points out. "Thus, while the majority of the population does one thing (like migrate and overwinter), there is always a significant subset exposed to the same environment, that decides to do something different, like not migrate. Most of these of course will die but in some circumstances, some locations, the outcome may be good, giving another option for continuation of the species, should it become necessary. We may be seeing this now with the rise in winter breeding of monarchs in warmer parts of interior California like the LA Basin and SF Bay Area. There is also evidence for the first time of breeding winter monarch survival in far southwestern Oregon."

You can follow David James' research and observations on his group's Facebook page,  Monarchs of the Pacific Northwest at https://www.facebook.com/MonarchButterfliesInThePacificNorthwest. A summer monarch in flight in Vacaville, Calif. (Photo by Kathy Keatley Garvey)
His post yesterday: "Many of you who follow this page have been part of our Washington State University Monarch Tagging Program and will be interested to learn that the second scientific paper from this research has just been published and is available free here: https://www.mdpi.com/2075-4450/12/2/161 A heartfelt thank you to all who participated in this research, which is still ongoing. The paper presents (among other things) the first data showing that fall migrants from the PNW may not end up in overwintering colonies, instead forming breeding populations. The photo below shows one such migrant laying eggs on backyard milkweed in Karen Krimmer's garden in October 2019. Conversion of non-reproductive migrants to reproductive winter breeders appears to have happened on an unprecedented scale in California this winter, as I discussed in recent posts. I will have more news to share on winter breeding of monarchs in San Francisco over the next few months."

On Jan. 12 James posted a graph showing "the number of observations of monarch larvae/pupae (as recorded on I-Naturalist) in the San Francisco Bay area during November/December for every year since 2015. The graph showed a huge (>5X) increase in observations in 2020 compared to each of the the previous 6 years. I have now extracted data on monarch reports for January 2021 and compared them to the previous six years (see graph below). Once again, the data show a large increase in reports of both adult and immature stage monarchs during the past month in the SF Bay area. In fact, the increase is greater than for Nov-Dec. The average number of larvae/pupae reported on I-Nat during January from 2015-2019 was 1.0. This year the number was 63. Similarly an average of 5.0 adults were reported for January during 2015-19, yet this year there were 58 sightings reported to I-Nat. Of course some of this increase can be explained by increased use of I-Nat in these covid times to report sightings, but I doubt that this explains it all. Interestingly, there were signs last January of an increase in sightings when 10 larvae and 12 adults were reported. But the numbers in January 2021 are on another level." A monarch laying eggs on tropical milkweed in the summer of 2020 in Vacaville. (Photo by Kathy Keatley Garvey)
That drew this comment on Facebook:  "I was in a meeting yesterday where the availability of tropical milkweed along the Pacific Coast was given as the reason for the trend toward non-migration at overwintering sites. The solution given was to make tropical milkweed unavailable at nurseries and not to plant any milkweed within 5 miles of an overwintering site.  I haven't heard of a correlation between the availability of milkweed and the non-migratory phenomenon. Thinking tropical milkweed use in coastal gardens isn't a recent trend. Has the migratory driver for the eastern or western population ever been linked to a geographical wave of native nectar and larval host plant seasonal availability? Are monarchs moving north to Texas forced to continue to move north because the flowers and milkweed are going brown? So do you support the non-migrating California monarchs by planting milkweed along the coast or discourage coastal milkweed to get the monarchs to snap back into migration?"
James responded: "There is no science to back up the claim that the presence of tropical milkweed interferes with migration and reproductive dormancy in western monarchs. The only science there is (and it's marginal) pertains to eastern monarchs. Far more research is needed on this issue before such claims can be made about tropical milkweed. Migrating and non-reproductive monarchs in Australia are NOT adversely affected by the presence of non-native milkweeds. In fact, the presence of milkweed appears to beapre-requisite foroverwintering sites. I did this research in the 1980s and I published a review on it in 2019. Provide an email address and I'll send aPDF."

James' work draws such comments as "You rock, Dr. David James! Thank you for speaking common sense and not regurgitating a hard line which equates to death for the monarchs when milkweed is purposely cut and no milkweed is available for the next generation to consume! I look forward to more findings from you and your honest research reporting. Thank you so much for all you do to help the monarchs thrive not just survive!"

Meanwhile, anyone else see any monarchs flying around the Bay Area and/or in Yolo and Solano counties? 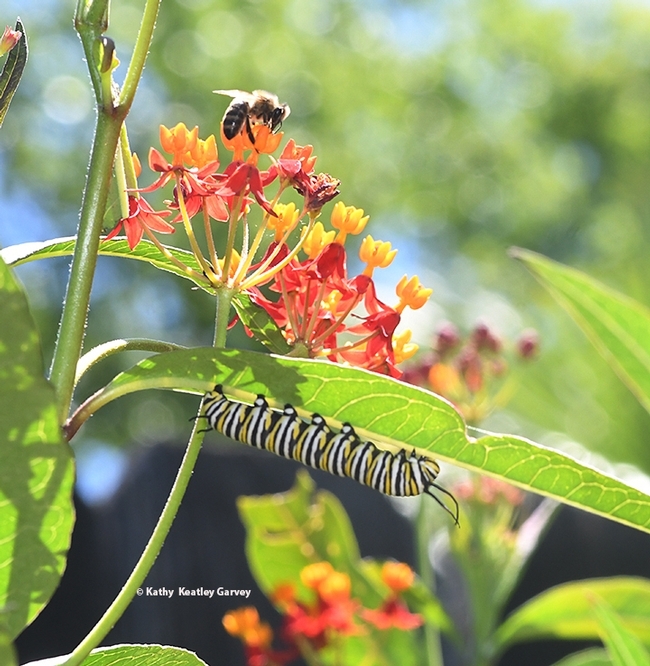 A monarch caterpillar and a honey bee sharing tropical milkweed, Asclepias curassavica, in the summer of 2020 in Vacaville, Calif. (Photo by Kathy Keatley Garvey) 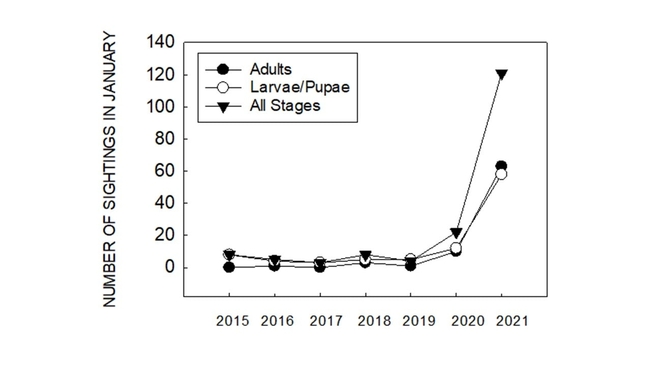 This is the graph that WSU entomologist David James posted on his Facebook research page, Monarchs Butterflies in the Pacific Northwest.
Focus Area Tags: Environment, Natural Resources, Yard & Garden
Tags: Art Shapiro (269), David James (26), declining population (2), monarch butterflies (91), non-native milkweed (1), tropical milkweed (22), UC Davis (268), Washington State University (33)
Comments: 1
Comments:
by Lisa
on March 2, 2021 at 9:26 PM
Monarchs
I was thrilled to find monarch caterpillars in my area (Oakland, Ca) They were on the tropical milkweed. Some of the caterpillars were okay and I took them in and helped get them to maturity stage and release as butterflies despite the winter months. However, caterpillars from the nearby bushes show signs of OE and one that actually made it to butterfly maturity, definitely had wing malformation.
Leave a Reply: