Smith loves talking about them, engaging folks face-to-face, and answering their questions. He is a fixture at the Bohart Museum open houses and other events, including the UC Davis Biodiversity Museum Day and the annual UC Davis Picnic Day.

But this year's Picnic Day, the 107th annual, went virtual due to the COVID-19 pandemic. Not to be deterred, Smith hosted a one-hour Zoom session. "Mimicry in the Butterflies and Moths with Jeff Smith," now available online on YouTube at https://youtu.be/8ZccezxhhK4.

Smith prefaced his talk by recommending the 375-page book, Insects and Other Arthropods of Tropical America by Paul E. Hanson and Kenji Nishida. "I didn't write it," he added, "and we (Bohart Museum) do not sell it (in the gift shop)." The book is an introduction to arthropods in North America--not just butterflies and moths but beetles, wasps, flies, true bugs and others.

"I've always been fascinated by the mimicry of  butterflies and moths," said Smith, who won a 2015 Award of Distinction from the UC Davis College of Agricultural and Environmental Sciences for his volunteer service (see news story).  "I've had the opportunity to make 10 to 12 trips to South and Central America. What I found there are great examples of how they can mimic each other or other things in order to survive."

Smith defined mimicry as "the close resemblance of an animal to some other animal, some other a plant or some inanimate object." Müllerian mimicry, named for Johann Friedrich Theodor "Fritz" Müller, is "where two or more species have similar appearances as a shared protecting device," Smith told this audience. "Batesian mimicry, named for Henry Walter Bates, is the resemblance of an edible species to other species that are noxious and avoided by predators."

"The monarch and the viceroy are good Batesian mimics," Smith said, "because until recently, it was believed that the monarch is distasteful and slightly toxic and that the viceroy was an edible species but it looked so much like the monarch that it was protected as well. It turns out--I don't know if somebody ate it or if they just tested the chemicals in the insect--but it turns out the viceroy is also a distasteful and toxic butterfly so we've now switched this from Batesian and mimics to Müllerian mimics, but the fact is, that they they look very much alike. Predators may have tried one and didn't care for it so now they leave alone anything that kind of looks like that."

"In order for mimicry to work," Smith pointed out, "the two different species need to be living in the same general habitat as each other. So if the monarch lived in Asia and the viceroy lived in North America, predators would never learn to associate these things with each other, and with that bad experience of trying to eat them."

"It's also important, I think, for us to understand that everything about every insect, in particular every butterfly and  moth, that every pattern, every color, and every shape is meant to protect it. These things have evolved over many millions of years and that's what's worked for them." The eye spots of the buckeye butterfly offer some protection from predators, says Bohart Museum Lepidoptera curator Jeff Smith. (Photo by Kathy Keatley Garvey)
Smith called attention to camouflage: butterflies species that resemble leaves and moths that are perfectly camouflaged against a tree trunk.  Larvae of some butterflies, like the Anise swallowtail, Papilio zelicaon, resemble bird droppings, and offer some protection. When disturbed, the Anise caterpillar extends its osmaterium or scent glands "that are very smelly."

Smith also drew attention to predator avoidance of butterflies with eye spots, such as the buckeye butterfly, Junonia coenia, and the owl butterflies, Caligo. Some bumble bees have beetle and fly mimics, including the longhorned wood-boring beetles and robber flies. "They look like something that could sting and they get protection from that."

Smith estimated that of the 17,500 described species of butterflies in the world, about 750 of those occur in North America. "However, in North America there's 160,000, easily, species of moths. Moths are far more numerous than butterflies, and in particular, with the little tiny moths, it's estimated by experts in those groups, that at least 90 percent of the species still have not been described. They are sitting waiting for someone to identify them and give a name to them. So if anybody is interested in insects and wondering if there's still something left to do, the answer is absolutely yes."

The Lepidoptera curator also discussed host plants: how milkweed offers toxicity to monarch caterpillars, and how passionflower offers toxicity to Gulf Fritillaries.  "And they sequester it. They use it for their own defenses. It's kind of curious that in the monarch butterflies, the male may pass on some of those toxic chemicals to the female when they mate, and the female then stores those chemicals into the eggs, and gives the eggs some level of protection once they're placed on a plant. So they call it a nuptial gift." This blue Morpho, Morpho menelaus, was collected in Belize. (Photo by Kathy Keatley Garvey)
"Red, orange and yellow tend to be warning colors," Smith related. "They've very common on insects that are toxic and distasteful, and therefore, their mimics also have these red, orange and yellow colors. A predator might leave them alone because (after eating one),  they are wired to know they don't taste good."

When asked his favorite butterfly, Smith acknowledged that "it's kind of hard to pick a favorite butterfly. It may very well be, I mean as far as the thing that gets me the most excited, the big Morphos, the big blue Morpho butterflies that you find in tropical America. There are about 30 different species. They're almost all brilliant metallic blue on top, with wing spans of four to six inches across, and brown on the underside so they're camouflaged when they're landing with those wings closed. But when you see one of those fly by you, and when you're walking around in a trail in the rain forest in Central or South America, it's pretty exciting. Once in a while, it'll even land on your arm and sip the the sweat."

Many people don't want to know this, Smith said, but butterflies also feed on the nutrients in "rotten bananas, dead animals, and urine and feces." That includes human waste.

Lamenting the plunging population of monarchs, Smith advocated that folks plant milkweed and nectar sources in their gardens.  Urbanization is one of the causes of the decline, he said.

The Bohart Museum, which is marking its 75th anniversary this year, is located in Room 1124 of the Academic Surge Building on Crocker Lane, but is temporarily closed due to the COVID-19 pandemic.  Directed by Lynn Kimsey, UC Davis distinguished professor of entomology, it houses nearly eight million insect specimens and is the seventh largest insect museum in North America. In addition to its online gift shop, the Bohart Museum maintains a live "petting zoo" comprised of Madagascar hissing cockroaches, stick insects and tarantulas. 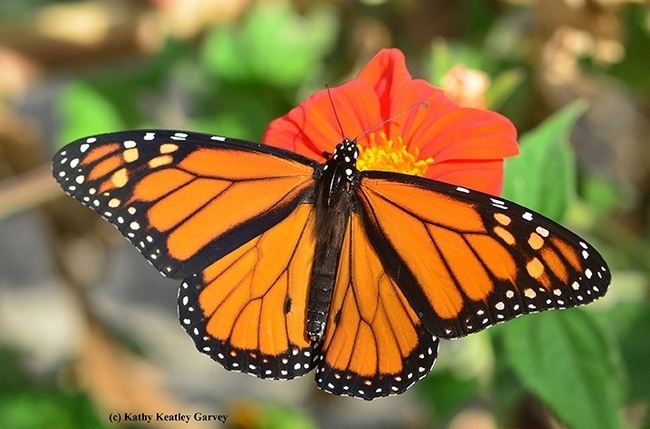 Entomologist Jeff Smith, curator of the Lepidoptera collection at the Bohart Museum of Entomology laments the declining population of monarchs and advocates that people plant milkweed and nectar sources in their gardens. (Photo by Kathy Keatley Garvey) 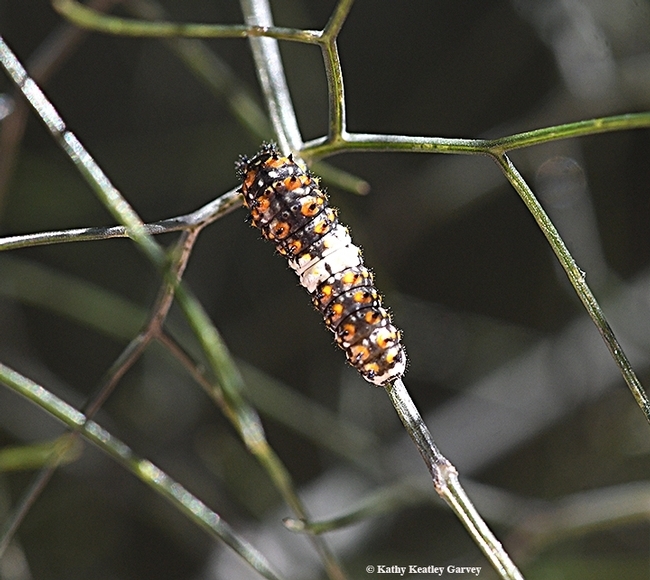 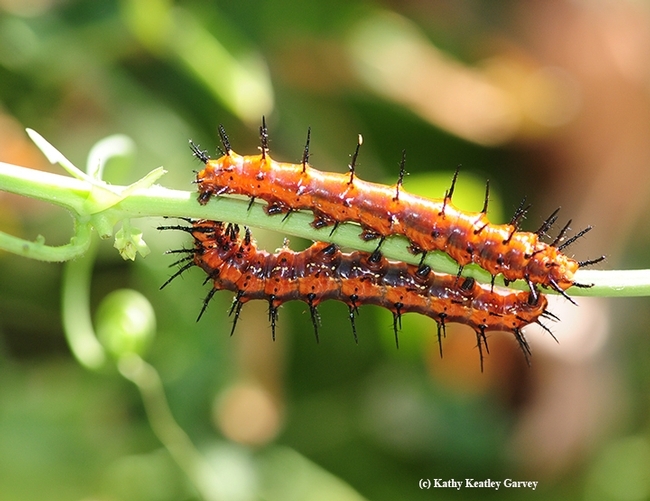 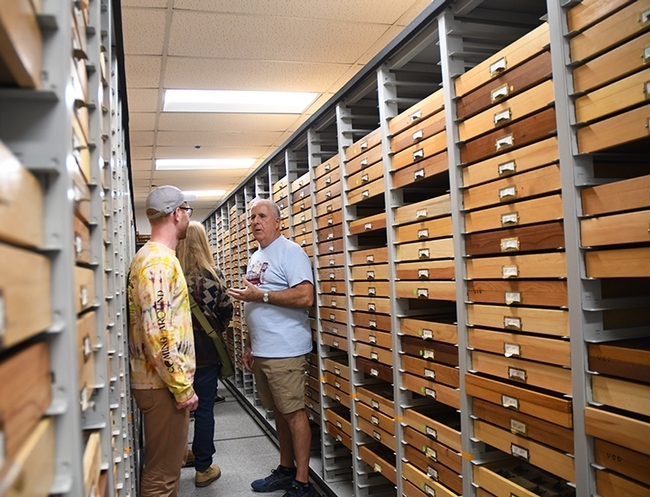