Paul Willems, who co-owns Berry Lady Farms in Kingsburg with his wife Gayle, said berry season is a happy time for him and his family. He attributes their sunny disposition to all the blueberries in their diets.

“I feel better when I eat lots of blueberries,” Willems said. “They make you feel happier. I wish I had them all year long.”

Gayle Willems said the fruit may stimulate serotonin in the brain, providing a calming effect. But, she added, the good feelings may not be just the blueberries. "It makes us feel better anytime we eat healthy, right?"

The Willems may also be particularly happy during blueberry season because of the success of their 100-acre farm. The couple grows and sells 12 blueberry varieties over the season at a farm store, farmers markets and through conventional channels. Blueberries are expensive to establish and require a great deal of hand labor for harvest, but they are the second-most valuable crop per harvest acre, after cherries, according to the California Blueberry Association.

The California blueberry industry is growing at a healthy pace, and with 6,000 acres producing about 30 million pounds of the antioxidant-rich fruit, the industry’s volume has now surpassed Florida, said UC Cooperative Extension farm advisor Manuel Jimenez.

A leader in the development of the California industry, Jimenez has conducted blueberry observational trials – looking at yield and flavor characteristics – for more than a decade at the UC Kearney Agricultural Research and Extension Center in Parlier. In addition, the Kearney blueberry plantings have been the scene of ongoing studies on plant spacing, mulches and pruning, research that has helped farmers successfully establish the crop in the semi-arid San Joaquin Valley.

Jimenez will invite blueberry farmers and those considering entering the industry to Kearney this week to taste and compare 35 varieties of berries. Looking over the plots, Jimenez said it wouldn’t be difficult for a farmer to use information from the Kearney trials to select good-tasting berries that ripen sequentially for months, extending one farm's blueberry season from spring until mid-way through the summer.

“You could plant Snow Chaser, a very sweet, early variety, in hoop houses and start harvesting in the second or third week of April,” Jimenez said. “Next, Reveille could come into production. Southmoon is really late and then Centurion, a rabbit eye blueberry that’s small and sweet, would be ready in late July.”

For more information about the blueberry meeting this week at Kearney, see the flyer. 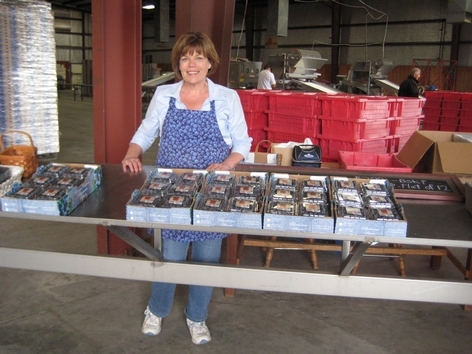 Gayle Willems at the Berry Lady blueberry stand, which sits inside the farm's packing house.
Tags: blueberries (6), Manuel Jimenez (3)
Comments: 1
Comments:
by Ruth
on May 5, 2017 at 5:13 PM
When are the Blackberries get ripe?
In may or june
Leave a Reply: