A beetle bores a tree trunk to build a gallery in the wood in order to protect its lay. As it digs the tunnel, it spreads ambrosia fungal spores that will feed the larvae. When these bore another tree, the adult beetles will be the transmission vectors of the fungal spores in another habitat. This mutualism among insects and ambrosia fungi could be more than 100 years old --more than what was thought to date-- according to an article published in the journal Biological Reviews.

The study analyses for the first time the symbiotic associations and the coevolution between ambrosia fungi and beetles from a paleontological perspective using the Cretaceous fossil records of these biological groups. Among the authors of the study are the experts David Peris and Xavier Delclòs, from the Faculty of Earth Sciences and the Biodiversity Research Institute of the University of Barcelona (IRBio), and Bjarte Jordal, from the University of Bergen (Norway).

Beetles that grew fungi millions of years before human agriculture

Some termites, ants and beetles developed the ability to grow fungi in order to eat millions of years ago. This mutualism between insects and fungi --one of the top studied symbiosis in the natural field-- is an analogous evolutionary strategy in the farming activities of the human species since the Neolithic revolution.

Understanding the origins of the symbiosis between insects and fungi is a field of interest in several scientific disciplines. Nowadays, the mutualism between ambrosia symbiont beetles and fungi is the cause of forest and crop plagues that cause serious ecological and economic losses "it remains unclear which ecological factors facilitated the origin of fungus farming and how it transformed into a symbiotic relationship with obligate dependency", notes David Peris, first author of the study.

When did the lineage of farming insects begin?

Historically, phylogenetic studies suggest beetle fungiculture started more than 50 million years ago --before other insects-- and some studies dated it back to 86 million years ago. "The symbiotic relationship between fungus and beetles would have probably originated more than 100 million years ago, during the early Cretaceous, in groups of beetles that had gone unnoticed", reveals the expert David Peris.

As part of the study, the experts studied several specimens of worldwide distribution of the biological groups captured in amber from the Cretaceous. Therefore, the origin of ambrosia fungus is older than the main groups of beetles from the subfamilies Scolytinae and Platypodinae --Curculionidae family-- which now grow fungus in tree trunks, as stated by the authors.

"This suggests that these fungi used some other group of insects to spread millions of years ago", notes the researcher. Also, other beetle groups with a similar behaviour to ambrosia beetles --Bostrichidae and mostly Lymexylidae families-- present an older and abundant fossil record that would coincide with the emergence of ambrosia fungi, according to previous studies.

"The most interesting thing --he continues-- is that some studies note the ability to cultivate fungi in some of these current species".

Evolutionary convergence towards an obligate mutualism

The growing process of fungi starts when beetles colonize a new tree trunk or branch. During the Cretaceous, the abundance of fungi and wood-boring beetles facilitated a starting domestication of some groups of fungi. First, the fungal spores were accidentally transported from tree to tree by the wood-boring beetles "until this mutually beneficial association evolved towards a more intimate symbiosis in which fungi were inoculated into to a tree, the fungal mycelia grew and beetle larvae fed from the fungus", notes Bjarte Jordal.

This set of factors, together with the symbionts' high ability to adapt and change, eased the morphological and ecological adaptations of biological groups that converged in an obligated mutualism. That is, a symbiotic relationship between insects and fungi, beneficial for both, which still lasts.

"However, we need more studies on the knowledge of the ecology of the species from the Lymexylidae and Bostrichidae families to get more specific conclusions. Therefore, the discovery of new fossils in cretaceous amber of these groups will certainly help us to better understand the evolutionary history of this symbiotic relationship that still exists nowadays", concludes Professor Xavier Delclòs. 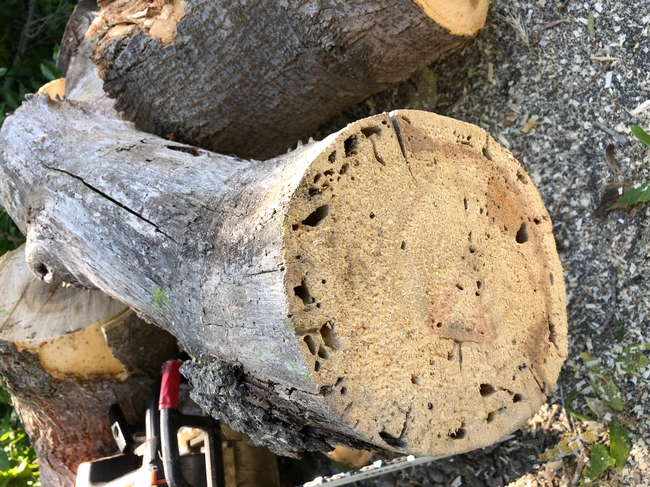